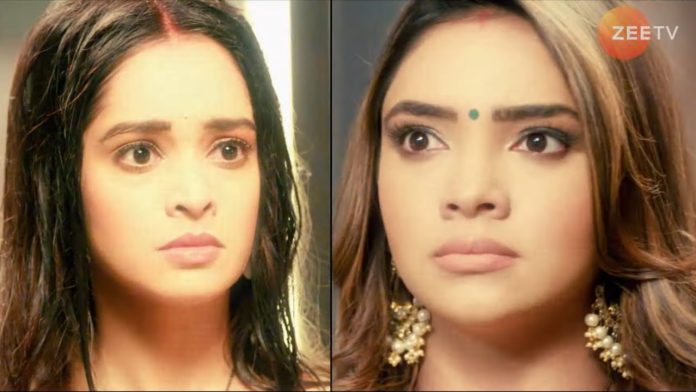 Kumkum Bhagya New Promo 16th February 2022 Prachi Rhea row Rhea and Prachi have a confrontation. Prachi applies the sindoor with pride, though she tells that she doesn’t have any interest in her relation with Ranbir. Rhea taunts her that those who don’t have their husband shouldn’t apply the Kumkum/sindoor. Prachi tells that the Kumkum belongs to her as Ranbir belongs to her. Rhea tells Prachi that the latter won’t have any right to apply the sindoor once her honeymoon with Ranbir gets accomplished. Pallavi splashes the water on Prachi’s head and washes off her sindoor. She asks Prachi to forget her words, because Ranbir will be just her dream, after he returns from his honeymoon with Rhea.

Rhea and Pallavi insult Prachi by snatching her Kumkum rights. Prachi angrily swears that she will not apply the Kumkum back until Ranbir comes to her and applies it himself. She tells that she will keep her hairline without the Kumkum till then. She throws another challenge at Rhea. Rhea is sure that Ranbir will be just of her. Prachi and Rhea fight for Ranbir once again. Will Prachi fulfill her word and get Ranbir on her side? Will Ranbir return in her Kumkum Bhagya? Keep reading.

Earlier in the show, Rhea makes a video call to Prachi to shock her. She asks Prachi to see their mini honeymoon suite. Prachi is shocked to see that. Rhea asks her how is the room. Prachi asks her to not shout on Ranbir, else he will leave her and run away. Rhea smiles and thanks her for making her mini honeymoon possible. She makes Prachi jealous by her words. She tells that they have enmity between them, but she is grateful to those who helps her. She asks Prachi to just see the romantic setting of the room. Prachi and Rhea continue to argue. Dida defends Shahana. Pallavi asks Shahana how can she live in their house for so long. She reprimands Shahana for being their enemy. Dida and Aaliya get into an argument. Dida asks her to stop instigating Pallavi. Pallavi wants Shahana to leave.

Reviewed Rating for Kumkum Bhagya New Promo 16th February 2022 Prachi Rhea row: 2/5 This rating is solely based on the opinion of the writer. You may post your own take on the show in the comment section below.