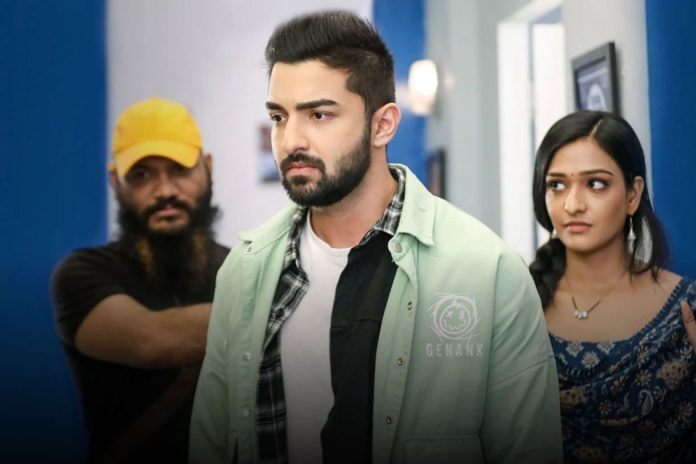 Bhagya Lakshmi 16th February 2022 Written Update Rishi to die Rishi tells Ayush that he doesn’t want to get more insulted, he will tell Lakshmi that its his mistake. Ayush feels Lakshmi will be hurt. Rishi tells that Lakshmi and he have no relation now, everything is over between them. He finds it strange but true whatever Malishka told him. He tells that after his marriage with Malishka, she will become his wife, he will try hard to save Malishka’s life if she is in danger, same way Lakshmi had been protecting her, because of her values. He tells that anyone would have done this for a spouse. He regrets that Lakshmi and he have no issues now. He wants to get the card back from Lakshmi, to save his future relation with Malishka. Lakshmi gains strength to read the love card. She gets emotional.

Rishi reaches Lakshmi to ask for the card, but finds her broken. Lakshmi tells I love him to him. He shockingly replies with a yes. Malishka looks upset. She grows more angered when Yogesh tells about Rishi and Lakshmi’s joint account. Malishka checks the papers. Rishi apologizes to Lakshmi. She sheds tears of sorrow. She tells that Shalu is mistaken, the card isn’t for her. She returns the card to Rishi. He asks her to look at him once. She tells that she knows that he loves Malishka, not her. She asks him to answer her that the card is for Malishka.

She reads the poetry in front of him, but this time he thinks of Lakshmi on hearing his own lines. He recalls her love confession. He cries in guilt. He realizes that he has broken his heart. Rishi asks Lakshmi to trust her, that the mistaken happened unknowingly. He holds her close when she refuses to listen to him. Lakshmi and Rishi get under a huge threat when the bank robbers spread their terror. Neelam prays for Rishi’s life. She gets terrified when the diya flame is put off by the stormy winds. She fears for Rishi and shouts out his name. The robber shoots at Rishi. Will Rishi get shot? Keep reading.

Rishi tells Lakshmi that he doesn’t know for who he got the card. He doesn’t want to name Malishka. Virender finds Neelam praying for Rishi. Dadi tells that Neelam is afraid for Rishi, pandit predicted that Rishi will be hurt by iron, so she is praying for her son. He tells that Lakshmi isn’t with Rishi, now Neelam will pray and fight for her son’s life. He knows she is feeling helpless now. Dadi cries that Lakshmi left Rishi, Neelam wants Lakshmi to come back. He knows that Lakshmi is Rishi’s shield, so Neelam wants her back, Lakshmi has always protected Rishi, but Rishi had just hurt Lakshmi. He wants Rishi to repent for his mistakes and give the valentines day card to Lakshmi, not Malishka. Lakshmi cries a lot. Rishi wipes her tears. She gets distanced from him. He tells that he has hurt her a lot, it was not intentionally.

Rishi pacifies her with love. He wipes her tears because he can’t see her crying. Shalu gets hurt when she collides with Ayush by mistake. Ayush cares for her. Rishi tells Lakshmi that he didn’t wish to hurt her. He asks her to ask her heart. She tells that she felt like he got the card for her and wrote everything for her, but its not his true feelings, he just loves Malishka, he has got the card for Malishka. She asks him why did he say that he doesn’t know about the card, for whom did he get it. She feels he doesn’t know his feelings. She knows what he feels and what he wants. She is sure that the card is for Malishka. She returns the card and goes. Ayush does the aid to Shalu. He tells that he is feeling guilty. He apologizes to her. He asks her what was she thinking. She tells that she can’t talk to him.

Malishka vents anger on someone. She wants to confront Rishi by showing Rishi and Lakshmi’s joint account form. The robbers keep an eye on Malishka. They get the green signal to start their work. They get the bank manager at the gun point. They take the locker room keys. They make the manager a hostage and take her along. Rishi asks Lakshmi to listen to him once. Lakshmi doesn’t stop. He makes her stop for his sake. She stops on hearing his name. She asks him to never do this. She doesn’t want to hurt him by scolding him. She asks Rishi why is he running after her when he is with Malishka. He asks her not to blame her, he is always concerned just for her, he went to shopping with Malishka, but he shopped for Lakshmi, he was just with her mentally. Lakshmi asks him why is he saying this.

She knows what she wants, she wants to stay away from him. Rishi asks her why did she stop hearing his swear. She tells that she won’t listen to him next time. He knows that she will always listen to him, because she can’t see him hurt. She asks him what does he want, he did wrong to cheat her, but she did wrong that she left the house. He tells that she is still there in their room, he feels just her in the room, he isn’t sleeping there from the day she left the house. He wants her happiness. She tells that she will stay happy when she is away from him. She asks him to stay away from her, he can’t be good for both Malishka and him, he can’t be love of two women.

She calls him a bad person, he broke her heart by his cheat, he has to learn from his mistake like she learnt from her mistake of trusting him blindly. She doesn’t want to repeat her mistakes. Shalu sees the robbers and thinks of calling the police. She shouts. Lakshmi and Rishi leave from the cabin. Shalu sees the robbers making the bank staff hostages. The people try to run away from the bank. Malishka hides somewhere to save her life. Lakshmi sees the chaos. She worries for Shalu. Ayush takes Shalu with him. Rishi is also shocked seeing the robbers. He takes Lakshmi with him. She tells that she has to go to Shalu. He tells that even Ayush is downstairs. She asks him if he doesn’t worry for his brother. He asks her to talk slowly. The robbers shut the exit. They snatch the phones from the people. The robbers ask the people to cooperate with them.

Shalu and Ayush worry for Rishi, Lakshmi and Karishma. Rishi asks Lakshmi not to risk her life. She tells that she can’t leave Shalu alone. Rishi follows Lakshmi to protect her, when she runs outside for Shalu. The robbers look everywhere if someone is hiding and acting smart. Ayush and Shalu get caught. Rishi engages Lakshmi in his talks to stop her. He asks if she is really willing to get a bullet. He tells that they all will get caught if she makes a mistake. He adds that she won’t be able to save Shalu if she gets caught herself.

Reviewed Rating for Bhagya Lakshmi 16th February 2022 Written Update Rishi to die: 4/5 This rating is solely based on the opinion of the writer. You may post your own take on the show in the comment section below.