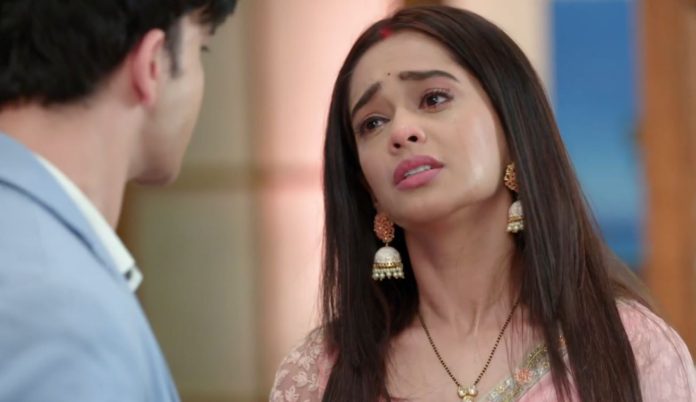 Kumkum Bhagya 16th February 2022 Written Update Prachi thrown out Prachi tells Rhea that she will not let Rhea celebrate the first night with Ranbir. She tells that she is committed, she will do whatever she had claimed. She tells that Rhea can never unite with Ranbir, it’s called a victory for her/Prachi that she did what she said. She boasts of her smartness, knowing Rhea and Ranbir got arrested and their first night plan is completely ruined. Pallavi plans to oust Prachi. Aaliya asks her is she sure of that. She tells that once they initiate the game, then they can’t come back, there will be no turning point. Pallavi tells that she is very sure. She asks Aaliya to call Prachi. Aaliya tells that they have to go till the end of the game. Pallavi replies that she won’t step back, Prachi has to leave from the house and also Ranbir’s life. She plans to throw out Prachi from the house before Ranbir comes back.

Rhea gets interrogated by the police. The inspector taunts her on her character. He asks her if she has come with her husband or someone else. Rhea yells at him and asks him to leave. She tells that she will complain about him. He tells that he is also police, he knows such girls who have a bad character and do such wrong things. She throws the water on his face in anger. Rhea gets arrested. She shouts to call Ranbir for help. Ranbir comes out of the washroom to know the matter. Rhea tells that the police is arresting her. Ranbir stops the police. Inspector arrests him too. Ranbir asks their crime. He tells that Rhea is his wife. Inspector doesn’t listen to them. Ranbir and Rhea get arrested.

Prachi asks how much time will it take. She gets the live feeds of the hotel by Mahesh’s help. Ranbir and Rhea argue with the Inspector. They get arrested. Prachi thanks Mahesh for all the help. Mahesh tells that he will be always there to help. Prachi tells that Rhea wanted to have a good honeymoon, now she will be having a good time in her real Sasural, where she deserves to go. She tells that Rhea won’t be able to touch Ranbir, because she belongs to just her. She doesn’t want anyone to hear her words. Prachi feels she has won the challenge and stopped Rhea from her first night. She wants to snatch Ranbir from Rhea on the valentines day. She tells that she will not tolerate anything, she will strike Rhea and then Rhea will try to save herself. She doesn’t want to waste time in defense, but to strike hard. She wants Rhea to pay for her crimes. She hopes Rhea and Ranbir have a good time together in the police lockup.

Dida asks Shahana to stay back for Prachi’s sake, because Prachi needs them. She asks if Shahana’s respect is more than Prachi’s future with Ranbir. She tells that they have to fight for Prachi’s esteem, because they know that Prachi needs them. She asks Shahana to stay with Prachi and give her strength. Shahana agrees and hugs Dida. She wishes to make Aaliya out of the house. Rhea argues with the Inspector. She tells that she is innocent. Inspector tells that he knows what kind of woman she is. She yells at him. She orders him to let her speak to her husband. Ranbir finds Rhea too brave to fight with the police. He wants Rhea to calm down. Inspector threatens Rhea.

Rhea tells that Ranbir is her husband. She angrily goes to raise hand on the Inspector. He warns her. She asks him to let her make a call. Rhea gets the permission and calls for help. Ranbir asks Inspector to listen to him once. Inspector asks if Rhea is really his wife. He wants to teach her a lesson because she is really ill mannered. Ranbir tells that Rhea is his wife. Ranbir wonders why is Rhea showing such attitude to everyone. Rhea calls Aaliya, but doesn’t get through. She thinks Prachi is behind the raid. Ranbir feels happy that police is helping him, he actually got saved from the honeymoon. Rhea asks him to use some contacts and throw some cash at the inspector’s face.

She tells that the honeymoon is important for them, even he wanted it. Ranbir nods to her. He thinks Prachi is winning the challenge well. He asks the Inspector to give him a chance. He praises Rhea’s family background. Inspector asks Ranbir if she is his wife. He tells that Rhea is caught at the hotel where they caught the other call girls. He adds that Ranbir has to prove his marriage by showing the marriage certificate. Ranbir grows worried that Rhea and he don’t have any marriage certificate. Prachi cries in Ranbir’s memory. She controls her emotions. She doesn’t want to get mad for Ranbir. She tells that she should be happy that she has won the challenge, she shouldn’t think of Ranbir and feel at peace. She vents anger on her. She controls her love feelings. She thinks she is going mad in revenge.

She gets to see Ranbir and Rhea’s marriage album. She remembers Ranbir’s love confession. She calls Ranbir a liar. She tells that he loved her and always told that he will never see anyone, but he broke her trust by marrying Rhea. She shouts in anger. She loses her mind. Pallavi and Aaliya find Prachi crying in her room. Prachi tears the pictures in rage. She tells that Ranbir has brought Rhea between them, he shouldn’t have done this, he wants to give her rights to Rhea, but she won’t let this happen, her Kumkum isn’t meant for anyone else. She swears to ruin Ranbir and Rhea’s relationship. Prachi breaks down. Aaliya asks how dare Prachi does such a thing. Pallavi stops Aaliya. Rhea tells that she didn’t carry the marriage certificate on her honeymoon trip. Inspector tells that marriage certificate is really important.

She reasons out that the marriage happened in a social way, she didn’t register the marriage because of some complications. Inspector asks them to prove it by calling someone they know. Ranbir gives the contact details. He asks Inspector to make a call and ask about them. Rhea asks Ranbir to use his contacts. He tells that they are in the police station because the police thinks they aren’t husband and wife. He adds that he gave Pallavi’s number. Aaliya asks Pallavi to do something against Prachi. She tells that Prachi should be out, Rhea is bearing injustice, but Pallavi isn’t helping her. She wants Pallavi to just throw Prachi out, it’s the right time. Pallavi tells that Prachi will get the support of the police again. Aaliya asks her to do something that Prachi leaves on her own.

Reviewed Rating for Kumkum Bhagya 16th February 2022 Written Update Prachi thrown out: 2/5 This rating is solely based on the opinion of the writer. You may post your own take on the show in the comment section below.