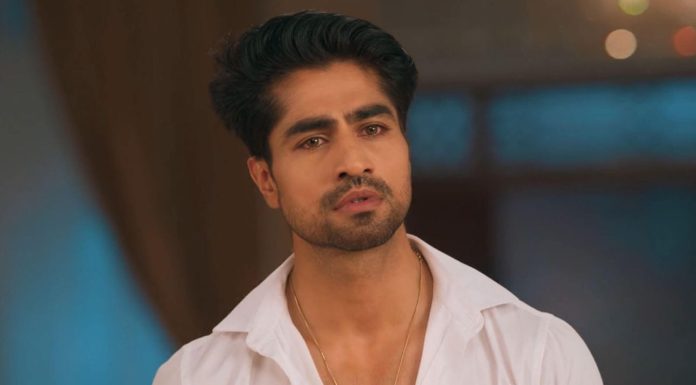 Akshara asks Abhimanyu what if they would really fight with each other someday. Abhimanyu says he doesn’t know. He tells Akshara that he tries controlling his anger but fails in defeating his anger. Abhimanyu tells Akshara that he feels scared of doing something unacceptable in his anger, which he may regret later. Akshara hugs Abhimanyu tightly and tells him that nothing like this would happen. Manish is seen passing from nearby Akshara’s room. Abhimanyu says good doctors being honest fails to become good spies. He asks Akshara to see Aarohi’s shadow, keeping a watch on them and their conversation.

Abhimanyu says if someone else would have seen in Goenka house, he/she would have asked, “Abhimanyu what are you doing here?”. Flashback shows Manish passing from nearby Akshara’s room. Aarohi understands Abhimanyu’s words and enters Akshara’s room being angry. She questions Akshara what Abhimanyu is doing in her room. Akshara tells Aarohi she and Abhimanyu are meeting each other to end their differences as they got angry with each other in Birla and Goenka family’s rivalry and argument. Aarohi asks Abhimanyu to apologize to Manish too as he is also very angry. She asks Abhimanyu if she should call Manish.

Manish enters Akshara’s room worried, hearing Aarohi’s calls. At Birla house, Neil requests Anisha to not leave Birla house. Anisha tells Neil that she understands his and Abhimanyu’s concern for her. She tells Neil that nobody else is concerned about her and her presence in Birla house. Anisha requests Neil to let her go. Parth asks Neil to let Anisha go and don’t stop her. Anisha says even her real brother doesn’t want her to live in Birla house. Parth tells Anisha if she would have understood him, then she wouldn’t have left the Birla family.

Anand asks Parth and Nei to let Anisha leave the house. He taunts Anisha saying that this time the boy has already left her and she isn’t running away with any boy, like last time. Neil hopes that no drama would be going on in Goenka house. At Goenka house, Manish asks Aarohi why she was shouting and calling him. Akshara hopes Aarohi stays quiet for Manish’s sake. Abhimanyu hopes the same. Aarohi tells Manish that Akshara told her that he is unwell. Akshara tells Manish that Aarohi got angry at her for not telling her about his arm pain. Aarohi asks Manish what is the benefit of her being a doctor if he didn’t tell her about his pain.

She examines Manish. Manish says he is better. Standing and hiding on the ladder, Abhimanyu thinks that Manish isn’t well. He also thinks that Aarohi may not be a good sister but is a good doctor. Abhimanyu further thinks Akshara and Aarohi both won’t let anything happen to Manish. Aarohi takes Manish with her. Akshara and Abhimanyu say bye and “I love you” to each other. Aarohi tells Akshara that this shouldn’t happen again as it’s about family now. Akshara promises Aarohi. At Birla house, Anisha says she wished that her parents would have understood the reason why she ran away from Birla house.

Mahima asks Anisha to leave as she hasn’t given them anything other than embarrassment. Anisha asks Neil to see that nobody even falsely lied to stop her or is really concerned about her in Birla house. Neil tells Anisha that he is also her brother and is asking her to stop. Upset, Anisha leaves Birla house, being stuck in a lot of emotions. Harshvardhan and Manjri request Anand and Mahima to stop Anisha but they don’t agree. Anand asks Manjiri to serve dinner. Abhimanyu comes in Ansiha’s way out if Birla house. On the other hand, Manish worries seeing Kairav screaming out his pain in his painting. Akshara comes with a food plate. She reminds Manish that he gave her and Kairav the love and care after their parents death.

She requests Manish to talk to Kairav and make him understand. Akshara tells Manish that Kairav is just like him, who keeps their things to themselves only and takes care of the whole family’s responsibilities. She requests Manish to understand Kairav and help him in his breakdown. At Birla house, Abhimanyu brings Anisha back to Birla house. He asks Birla why no one stopped Anisha. In a unique way, Manish makes Kairav eat the first bite of the food. Akshara recalls that Kairav also used to make her and Aarohi eat in Manish’s way. Abhimanyu tries to apologize to Anand on Anisha’s behalf. He asks them to forgive Anisha.

Abhimanyu asks Mahima and Anand to at least behave humanly with Anisha. He asks them to punish Anisha but don’t let her leave the house. Mahima asks Abhimanyu to stop. At Goenka house, Manish wishes that he could also have found solutions to his problems in paintings. He tells Kairav that he feels that his explanation about his and Anisha’s love story is incomplete. Kairav cries and hugs Manish. Manish asks Kairav to tell him what is troubling him this much. Kairav tells Manish that already there are issues between Birlas and Goenkas due to Akshara, Aarohi and Abhimanyu’s matter. He tells Manish that he lost his strength as he can’t see both families fighting and arguing anymore and that’s why broke up with Anisha.

Abhimanyu gives Anisha a doll and it’s memories as her reason to stay at Birla house. The doll is the memory of Abhimanyu and Anisha’s childhood. He asks Anisha to give him his fees for treating her doll in the past. Abhimanyu requests Anisha to stop leaving Birla house. Anisha hugs Abhimanyu tightly. Everyone except Mahima and Anand feels happy.

Reviewed Rating for Yeh Rishta 15th February 2022 Written Update Abhi’s stand: 4/5 This rating is solely based on the opinion of the writer. You may post your own take on the show in the comment section below.