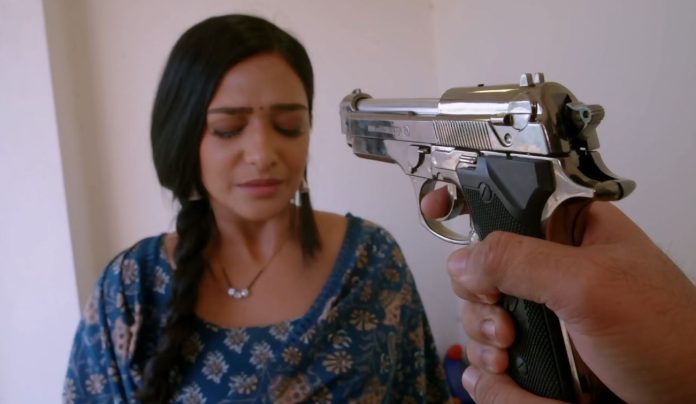 Bhagya Lakshmi 17th February 2022 Written Update Terrified Lakshmi Shipra orders Rishi and Malishka to come with her to the locker room. She tells that she has to take the gold and cash from the lockers. The robbers take Rishi, Malishka and Lakshmi at gun point. Malishka worries for Rishi, while Rishi worries for Lakshmi. Malishka tells that she will go with Rishi, Shipra can take Lakshmi along. Rishi stops Shipra from taking Lakshmi. He tells that he will stay with Lakshmi, she won’t go anywhere. He prefers to stay with Lakshmi and protect her. He holds Lakshmi’s hand, instead of Malishka.

The robber tells Malishka that be it a real life or a film, a wife wins always over the girlfriend. Malishka gets heartbroken. She is taken away by the robbers. The robbers chief threatens to kill Malishka. He asks her to close eyes and recall the person she loves the most. Malishka gets scared for her life. Rishi and Lakshmi try to run away. They are chased by the robbers. They also get caught and held at gun point. Lakshmi closes eyes and prays for herself and everyone stuck in the danger. What will be twist of fate for them? Keep reading.

Earlier in the show, Shalu and Ayush worry for Rishi, Lakshmi and Karishma. Rishi asks Lakshmi not to risk her life. She tells that she can’t leave Shalu alone. Rishi follows Lakshmi to protect her, when she runs outside for Shalu. The robbers look everywhere if someone is hiding and acting smart. Ayush and Shalu get caught. Rishi engages Lakshmi in his talks to stop her. He asks if she is really willing to get a bullet. He tells that they all will get caught if she makes a mistake. He adds that she won’t be able to save Shalu if she gets caught herself.

The robbers catch Shalu. Ayush protects Shalu. Shipra tells that Ayush likes Shalu and she can see it. Shalu argues with Shipra. Ayush asks Shalu to let the robbers say anything. The people caught by the robbers are kept at gun point. The chief asks Shipra to take the bank manager to the locker room. Shipra knows Malishka has a relation with the manager. She wants to take her along. Malishka wonders where is Rishi, if he is with Lakshmi. Rishi tells Lakshmi that he will find a solution to get saved from the robbers. He uses his sharp mind. Lakshmi asks him to call the police. The goon gets to hear their arguments. Rishi tells that he had tried calling the police. Lakshmi worries for Shalu. He tells her that Ayush will not let anything happen to Shalu. They get close to get caught by the goons. Neelam takes Virender’s support.

They pray for Rishi. He didn’t see Neelam so scared before. He also wishes that Rishi stays safe. He wants Rishi to come home and stay in front of Neelam. He calls Rishi. Shipra asks Malishka to come with her. Ayush wishes that Karishma is okay. Karishma hides and sees them. Ayush doesn’t want the robber to see his mom. Rishi and Lakshmi get caught by the goons. Rishi asks the goon to put the gun down and talk. He asks if the goon has no manners. The goon asks him to give the phone. Lakshmi asks Rishi to not argue. Rishi tells that Lakshmi asked him to call the police. He tells that he will give his phone if the goon puts down the gun. The chief catches Karishma, who is upset that Shalu got her caught. He tells that Karishma would not be liking Shalu, but Ayush likes the girl. Karishma tells that even her son doesn’t like Shalu.

Rishi and Lakshmi get into a big argument. The goon asks them to stop it. He tells that he didn’t get married for this reason. Rishi hugs him. He tells that wives are such troubling. He asks the goon to take him along, instead listening to Lakshmi. Goon asks Lakshmi to give her phone. Rishi asks Lakshmi not to say anything, she is his wife and doesn’t have her own phone, they use the same phone. Lakshmi tells that she isn’t Rishi’s wife. Another goon confirms that Rishi and Lakshmi are husband and wife. Goon asks Rishi and Lakshmi are they really married and use the same phone. Rishi tells that they would have called the police if they had another phone. Lakshmi realizes that Rishi is lying to hide her phone to all the police later on.

Karishma and Ayush argue. The chief tells that Karishma will be the villain of his love story. He snatches their phones. Rishi tells the goons that its impossible to understand a wife, because her meaning would always be different than her actual words. The goon tells that its tough to understand wives. Rishi complains of his wife. He tells that he suffers all the time, she has a problem with him always. He asks the goons to help him. Lakshmi tells that she understands what he means to say. Goon asks them to come with them. Rishi asks Lakshmi to show some respect for the city’s top goons. Goon pities married men. Rishi tells Lakshmi that they will call the police by distracting the goons. Lakshmi doesn’t want to leave Rishi alone. Malishka finds Rishi and Lakshmi with the goons. She scolds Rishi for being with Lakshmi. The goon tells her that Rishi already got much scolded by his wife Lakshmi. Malishka gets angered and confronts Rishi about the joint account.

Rishi asks Malishka to understand. He asks the goon to take him away. The goon asks Rishi about the two women. Shipra and Malishka argue in anger. Malishka blames them for messing up things. She tells that she is going to marry Rishi now. Shipra asks what about trust. She tells that trust is also important with love. The goon tells her that Rishi loves Lakshmi and its proved. Malishka asks Shipra to take Lakshmi with her. She wants to be with Rishi. Rishi doesn’t want Lakshmi to go. He tells that he won’t leave Lakshmi. Malishka tells that she is also scared and wants to be with him. He asks her not to worry, he has to go with Lakshmi. The goon tells that a wife always wins over the other woman. Malishka is taken by Shipra. Rishi feels sorry. He wants to tell her the reason later.

Virender calls Rishi, Ayush and Karishma. He feels strange that their phones are switched off. Dadi tells that its not possible that their phones are off all the time. Rishi and Lakshmi are taken by the goons. Rishi asks Lakshmi to run quickly. He stops the goons from going after Lakshmi. He lies that he has both the phones. Lakshmi tries to get the network to call the police. Manager tells that Lakshmi would have done something like blackmailing Rishi. Malishka tells that Lakshmi isn’t such a girl. Shipra likes it that Malishka respects her boyfriend’s wife. Malishka angrily throws the locker keys down the window. She tells that she isn’t scared of the gun. Shipra slaps her and takes her to the chief. Rishi gets chased by the goons. Lakshmi is also caught at the same time. Shipra tells the chief that she couldn’t access the locker about of Malishka. Shipra and Malishka get into a fight. Lakshmi doesn’t find network in her phone. She finds a landline, but fails to call the police. The chief loses his mind and points the gun at Malishka’s head.

Reviewed Rating for Bhagya Lakshmi 17th February 2022 Written Update Terrified Lakshmi: 4/5 This rating is solely based on the opinion of the writer. You may post your own take on the show in the comment section below.