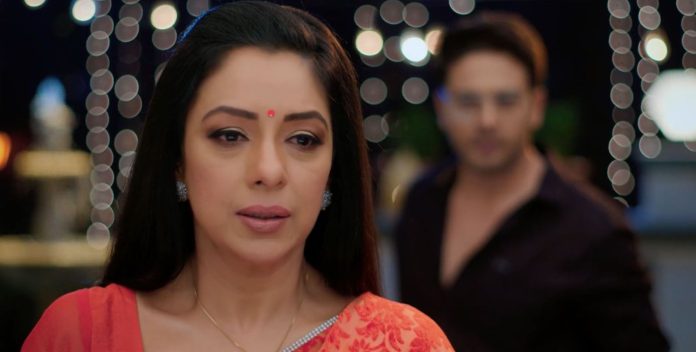 Anupama 17th February 2022 Written Update Anupama’s confession Anuj gets surprised and confused seeing the Valentine’s decorations Anupama did on the terrace. Anupama starts singing and dancing to the song, “Aaye ho meri zindagi mein tum bahar banke”. Anuj feels good and keeps staring at Anupama. As the song stops, Anuj asks Anupama for what purpose she did all these preparations. On the other hand, Nandini tells Samar that their separation presently is very difficult but easier than the future fights. She tells Samar that they should first focus on themselves first. Nandini further tells Samar that she thought a lot about their relationship and realized that many problems would be created by it in future.

She says to Samar that someone has to break up but pain would be felt by both of them. Samar tells Nandini that they can marry each other either after 1 year, 5 years or 10 years. He requests Nandini to not leave him and hugs her tightly. Nandini tries to calm down Samar by caressing him. She requests Samar to let her return to the US. Samar asks Nandini to go but not leaving him. Nandini tells Samar that she can’t be selfish and has to return to the US, breaking up with him. She tries to explain to Samar that it was a very difficult decision for her but is the right one. Samar again hugs Nandini and requests her to stop for him. Nandini requests Samar to let her leave for herself.

Samar tells Nandini that she is much more mature than him and would have taken the right decision. He asks Nandini to go if she wants to. Nandini thanks Samar and also apologizes to him. Samar apologizes to Nandini for making her believe in love but failing in making her believe in happiness. Nandini stops Samar from walking away. Samar asks her why she holded his hand when she is going to leave the same hand. Nandini tells Samar that these were the most beautiful days and was the most beautiful love of her life. She says separation should also be done with love in love. Nandini further says that they should have a smile on their face with teary eyes, when they face each other again in future.

Samar tells Nandini that she could have left without informing him, but she instead gathered up the courage to inform him. He tells Nandini that he would consider their story’s closure as a valentine’s gift from her. Both Samar and Nandini wish Happy Valentines to each other. On the other hand, Anupama tells Anuj everyone is taught since childhood that everything has an expiry date. She also tells Anuj that they have been taught wrong as there is no expiry date of liking someone. Anupama says that a person has the right to be happy, loving anyone, or be loved at every age. She tells Anuj that he has given her this right.

Anuj gets awestruck. At the dance academy, Nandini and Samar get teary eyed. Nandini caresses Samar and kisses his forehead. Both of them dance together in sadness of getting separated on the song “Judaai”. They try to be with each other and caress each other. Samar breaks down, goes on his knees and hugs Nandini. Nandini also feels broken. Both Samar and Nandini cry profusely in each other’s arms. Nandini jumps on Samar and Samar twirls her. They cry their pain of separation and continue dancing. Both of them hug each other and recall their past and beautiful memories.

Anupama tells Anupama that Lord Krishna knew Vanraj’s reality and was thus trying to fit/ sow his name in her heart. Anupama indirectly tells Anuj that today she will repeat and tells him what he means to her in her life. Anuj asks Anupama if she wants to say something else too. Anupama says she has a lot more to say today. Anuj requests Anupama to say whatever she wants to say. Anupama reminds Anuj that in the temple, she told him that she has no place for anyone in her heart and life. Anuj says he remembers. Anupama tells Anuj that he has made his place in her heart and life.

Anuj gets surprised and happy hearing Anupama’s confession. Anupama tells Anuj that 4-5 years ago she didn’t even know that Valentine’s day existed. She also tells Anuj that when she got to know about Valentine’s day, she thought it was meant for youngsters. Anupama further tells Anuj that it is not her age to do things like youngsters but then thought that there is not only one way of expressing love. She says the definition of love can change but not love. Anupama tells Anuj that she does not know how to express her love using love cards and red roses. She says she thinks of expenditure and veggies in all things as she has been a homemaker too. Anuj laughs with Anupama.

Anupama says she is as she is. She tells Anuj that she will express her feelings in her own way. Anupama says she won’t be able to live if she doesn’t express her feelings today. She tells an overwhelmed Anuj that initially he was a stranger to her, then he became her friend and then she started feeling a difference in heart. Anupama further tells Anuj that her heart told her later but she was already in love with him. Anuj gets more overwhelmed. In the next episode, using Lord Krishna and Goddess Radhika’s poetry Anupama will start expressing her feelings to Anuj. Anupama will tell Anuj that she wants to grow old with him. Anuj will be overwhelmed with Anupama’s confession.

Reviewed Rating for Anupama 17th February 2022 Written Update Anupama’s confession: 5/5 This rating is solely based on the opinion of the writer. You may post your own take on the show in the comment section below.