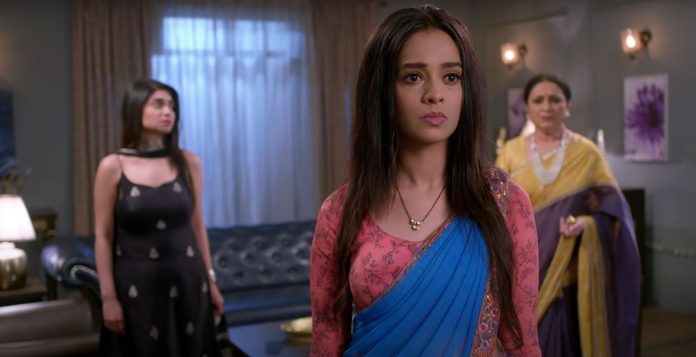 Kumkum Bhagya 18th February 2022 Written Update Master Shot Dida asks Prachi to apply the Kumkum in her hairline. Prachi refuses to do so. She swears that Ranbir will apply the Kumkum in her hairline, that too in front of Pallavi. She doesn’t want Pallavi to say again that she didn’t see Ranbir filling the Kumkum in Prachi’s hairline. She tells that she will not apply Kumkum until Ranbir does this himself. Ranbir calls up Prachi to take her help, when nobody in the family was taking his calls. He asks Prachi to come to the police station and help Rhea and him by testifying their marriage. Prachi, Dida and Shahana rush to the police station. They meet the Inspector.

Ranbir accepts that Prachi is his wife. He applies the Kumkum in her hairline on her condition to do so in front of Pallavi. Ranbir proves that Prachi is his wife, when he had called her to prove that Rhea is his wife. After a lots of confusion and chaos, Ranbir and Prachi share a Kumkum moment. Pallavi is left fuming in anger seeing Prachi fulfilling the vow. Prachi tells that she has won the challenge, Rhea should think a hundred times before challenging her, else she will punish Rhea for all the crimes in a single day. She threatens Rhea of the arrest. Dida and Shahana get glad to see Prachi winning over Rhea. Ranbir completes the formalities and leaves with his family. Keep reading.

Prachi goes to her room and sheds tears recalling her marriage with Ranbir. Dida hugs Prachi and consoles her. Prachi tells that a family member has done this with her, such wound given by family is really deep. Dida knows that Pallavi has given her a deep wound. She asks Prachi not to fall weak. Prachi tells that she is trying hard to fight for her identity, but now her courage is breaking. She adds that she fought Ranbir who linked her with Siddharth and insulted her love, by staining her character, she had stayed strong and left from his life, she broke her relation with Sushma to come back to Ranbir. She adds that she was left alone and encouraged herself, she didn’t fall so weak as today after Pallavi’s outrageous move. She tells that she didn’t know that she will break down after losing her Kumkum.

She adds that Kumkum is a pride of a woman, she wanted to give the answer to Pallavi, but couldn’t, she feels lifeless without her Kumkum. Dida asks her to fill the Kumkum in her hairline. Prachi refuses to apply it. She tells that she will bring a storm to get her lost respect back, she will fix this and prove it to Pallavi. She tells that she will help herself, she will make Ranbir fill her hairline in front of Pallavi so that Pallavi doesn’t say it ever that she didn’t see Ranbir filling Kumkum in her/Prachi’s hairline. She takes this vow that she will not fill her hairline until Ranbir fills the Kumkum himself. She tells Dida that a phone call will come now and she will get to know everything. On the other hand, Aaliya encourages Pallavi to stay strong. She tells that Vikram isn’t in her favor, this is not a good sign.

She advises Pallavi to convince Vikram before he goes really far from her. She asks Pallavi to send Prachi away from the house. Prachi awaits the phone call. She thinks Pallavi will get the call and scream in response. She gets surprised when she gets the call from the police. She learns about Ranbir and Rhea’s arrest. Pallavi asks Prachi to leave the house right away. Prachi tells that Pallavi will need her now. She asks Pallavi to speak to the police inspector. Inspector tells Pallavi that Ranbir gave her number first. She gets worried for Ranbir and Rhea, when he tells about their arrest. Pallavi asks the reason. He summons her at the police station. Pallavi runs to inform Vikram. Vikram also gets worried for Ranbir and Rhea. Dida tells that she will be going with Prachi. Pallavi asks Vikram to come with her. Rhea tells Ranbir that she didn’t get stuck in such a situation before. She loses her mind. She feels this should have not happened with them.

Vikram, Pallavi and Aaliya get stuck on the way when their car breaks down. They get late in reaching the police station. Vikram tells that they have to book a cab and leave. Inspector asks Prachi to say. Rhea tells that Prachi doesn’t have Kumkum in her hairline. Ranbir asks Prachi about her Kumkum. He is also surprised to see that. Prachi reminds that he was trying to end their relationship. She tells the Inspector that Rhea is her Sautan. She gets the support from the NGO ladies. Rhea finally gets a relief when she sees Pallavi and Aaliya. She hugs Aaliya. She complains about Prachi. Prachi asks Pallavi to meet the NGO ladies and come on her side. The NGO lady Kalyani tells the Inspector that she has got the NGO ladies with her because of Prachi’s complaint, Ranbir had gone to the hotel with the other woman and Pallavi is supporting their affair.

Ranbir asks Prachi what is she doing. She reminds that she got the NGO ladies for help before also. She asks him why is she doing this when she doesn’t love her. Prachi tells that every husband and wife have fights, but their marriage doesn’t end. Rhea asks the Inspector not to believe her, she is the bahu of the Kohli family. Prachi asks Rhea why did she go to such a shady hotel. She tells that she was living with her in-laws, she has come to save her husband. She tells that she had doubted on Rhea and came to save Ranbir. She adds that she was helpless to send Ranbir with Rhea on the trip, because Rhea had got him in her control. She proves that she is Ranbir’s wife. She insults Rhea. Rhea asks her to shut up. She tells that Prachi is the other woman in Ranbir’s life. She argues with the NGO ladies. She gets a warning from the NGO ladies.

Reviewed Rating for Kumkum Bhagya 18th February 2022 Written Update Master Shot: 3/5 This rating is solely based on the opinion of the writer. You may post your own take on the show in the comment section below.