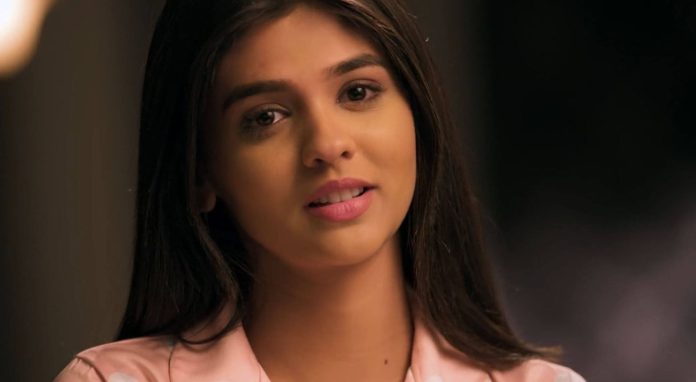 Later Akshara serves heart shaped Kachoris to everyone. Vansh praises it. Akshara says it’s her parents’ favorite. She says today everything should be in a heart shape today as it’s a special day. She asks Vansh if he remembers what today is. Swarna says nobody can forget today’s day as it is Sirat’s birthday as well as Kartik-Naira’s wedding anniversary. Akshara says her parents made this day more special and God gave birth to Sirat to give a message of love. Akshara says love’s real celebration starts from family and her family is excellent in this. Swarna tells Akshara that family members make a family special. She says she doesn’t want to make Kartik, Naira or Sirat feel bad by getting sad remembering them.

Swaram says she feels Kartik, Naira and Sirat are somewhere near them as part of their happiness. Akshara feeds Kachoris to Kairav and Aarohi. She asks Aarohi to get ready as soon as possible as they need to do something special for Kairav and Anisha. Aarohi recalls Abhimanyu and Akshara’s night hug as well as Kairav’s love confession for Anisha. Aarohi thinks that she is unlucky as always as everyone except her has their partners. She tries to convince herself that she is not a loser and can’t be a loser too. Later Akshara stops Kairav and requests him to drop her in between.

Kairav asks Akshara to sit. Suddenly a thief comes and snatches Akshara’s bag. Kairab and Akshara follow the thief. The thief enters a place that seems dangerous. Akshara stops Kairav from following the thief ahead. She asks Kairav to let the thief go. Kairav doesn’t listen to Akshara and goes behind the thief. He sees a shadow behind the curtains and grabs the person. The person turns out to be Anisha. Anisha and Kairav also fall on the ground. Decorations and curtains fall on Anisha and Kairav. “Kitni Baatein Yaad Aati Hain”, plays in the background. Kairav removes curtains from above him and Anisha. Both of them get lost in each other’s eyes.

Abhimanyu and Akshara tell Kairav and Anisha that they planned all this to make them talk to each other and express their feelings to each other. Kairav says he doesn’t want to say anything now as he already told earlier what he wanted to say. Kairav tells Akshara that she sent him here by cheating. Akshara asks Kairav and Anisha to not lose their chance. Anisha and Kairav request Abhimanyu and Akshara to get them out. Abhimanyu tells them that it’s their punishment for fighting with each other. Akshara requests Anisha and Kairav to express their feelings to each on this day of love (Valentine’s day).

She gets surprised seeing a love angel (cupid). Akshara apologizes to the angel and tells him that she came with a stupid person. She advises the cupid to not waste his arrows on her as Abhimanyu doesn’t care about Valentine’s day. She says it may be someone’s plan for his girlfriend or boyfriend. Akshara says Abhimanyu ruined her Valentine’s plan. Angry Akshara starts leaving Abhimanyu alone. Cupid hits his arrow towards Akshara. Akshara screams “aa mumma”. A soft pink blanket falls on/over Akshara. Akshara recalls that it’s one of Naira’s wishes. Some shoe shaped plush toys come in front of Akshara. Emotional Akshara hugs them tightly. She also receives a bow bracelet and kisses it.

Cupid continues hitting arrows and makes cute things appear in front of Akshara. Slowly Naira’s all wishes for Akshara gets fulfilled. Akshara eats the smiley Kachoris and wonders how it tastes like it is made by Naira. She wonders who did all this. She suspects Abhimanyu did all this for her. Cupid strikes an arrow. Akshara follows the arrow’s direction and sees a woman coming. At Goenka house, Aarohi sees that even Vansh is going on a date with Reem and she is the only one left alone (without a partner). She hears Akhilesh and Manish standing behind her and pretends to be talking to Akshara. She indirectly tells Manish and Akhilesh that Akshara is at the green tea garden with Kairav. Manish and Akhilesh wonder what Kairav and Akshara are doing at green tea gardens on Valentine’s day.

Aarohi makes an angry, evil face. Manjiri walks towards Akshara with a smile and also waves at her. She takes Akshara in her arms. Akshara hugs Manjiri tightly, recalling Naira’s words. Tears fell down from Akshara’s eyes. Manjiri caresses Akshara like a mother. Cupid makes flower petals fall on Akshara and Manjiri. Abhimanyu watches Akshara and Manjiri from a distance. Manjiri tells Akshara that a mother’s place cannot be taken by anyone but she can try to be her mother. She tells Akshara that she is very happy to be able to help in fulfilling her mother’s wishes and dreams.

Abhimanyu wishes Happy Valentine’s day to Akshara. He says nothing else would have been a better gift for Akshara than a mother in the form of Manjiri. Manjiri makes Akshara sit on a bench and sings the lori that Naira used to sing for her. She makes Akshara wear the soft and sound making shoes as Naira wished to. She applies nazar tikka behind Akshara’s ear and wards off the evil eye from her. Abhimanyu keeps watching Manjiri and Akshara from a distance. Maniri makes Akshara wear the bow bracelet. She also feeds smiley Kachoris to Akshara. Then Manjiri hugs Akshara and covers her with the soft pink blanket.

On the other hand, Anisha and Kairav spend time with each other having coffee and cookies. Anisha wonders why Kairav alone decided to break up with her. Kairav thinks that he truly loves Anisha but can’t make his family sad because of his love. He thinks he will alone tolerate the pain of separation from Anisha. Manjiri takes a leave from Abhimanyu and Akshara. Abhimanyu apologizes to Akshara for reading her mother’s diary. He tells Akshara that he brought her mother’s wishes to life as he saw her missing her mother a lot. Overwhelmed, Akshara hugs Abhimanyu tightly.

Akshara tells Abhimanyu that she has no words left to say. Abhimanyu asks Akshara to be in his arms only. Akshara thanks Abhimanyu for making Valentine’s day the most beautiful day of her life. Abhimanyu apologizes to Akshara for troubling her a little. Akshara tells Abhimanyu that he will get punished for troubling her a little. Akshara and Abhimanyu change into pink. A Barbie doll and her prince appear in front of Abhimanyu and Akshara dressed up like them. In the next episode, Abhimanyu and Akshara will be seen dancing in each other’s arms. Manish will get angry seeing Akshara celebrating Valentine’s with Abhimanyu. Later, Abhimanyu will not let Manish’s guards close the Goenka Mansion gate on his face.

Reviewed Rating for Yeh Rishta 17th February 2022 Written Update Emotional Akshara: 4/5 This rating is solely based on the opinion of the writer. You may post your own take on the show in the comment section below.