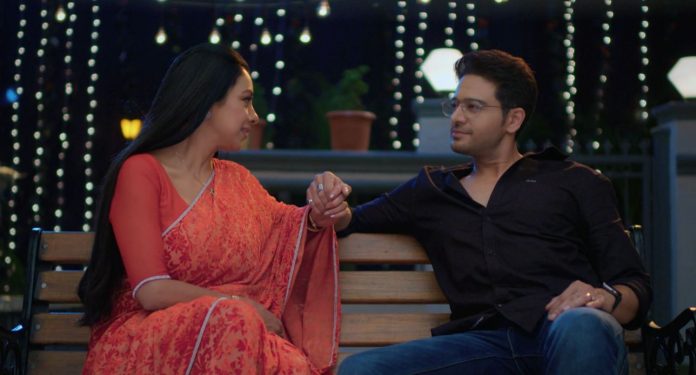 Anupama continues telling Anuj how Samar and Bapuji also helped her realize her love for him time and again. She further tells Anuj that she realized that #MaAn was already written in her heart when Samar wrote it on the board in her house. Anuj feels surprised and happy. Anupama says Vanraj did only one good work in his life and that was to free her. She says her heart started a new story after her divorce. Anuj’s happiness grows, when Anupama tells him about the heart tattoo she got made for him on her wrist. Anupama also tells Anuj that in the past when she froze in office, she was lost in his dreams only.

On the other hand, Kinjal returns home angry and finds Paritosh busy on a business related call. She tries to talk to him but Paritosh stops her. Kinjal gets shocked seeing a club stamp on Paritosh’s wrist and throws the bouquet in her hand. Paritosh disconnects his call and asks Kinjal if she has gone crazy. Kinjal tells Paritosh that she is crazy because she was trying to sort out everything between them. She angrily walks inside the house, leaving Paritosh outside. Paritosh enters his room and asks her what was the need of doing drama. Kinjal tells Paritosh that he doesn’t understand anything without drama.

Paritosh tells Kinjal he was in the club for business sake. He also tells Kinjal that she knows that it’s important to entertain the client in business. Kinjal tells Paritosh that she knows the do’s and don’ts of business but she doubts that he was doing business. Paritosh tells Kinjal that he could have easily removed the stamp and lied to her. He asks why he should hide it, when he didn’t do anything wrong. Paritosh asks Kinjal what she wants from him. Kinjal tells Paritosh that she wants his time and wants him to be equally responsible for their relationship. Seeing Kinjal crying, Paritosh apologizes to her and defends himself saying that he was doing work.

Kinjal gets very angry and asks Paritosh if he has ever heard about work life balance. She says people work to improve their life, not to make their lives hell. Suddenly Paritosh gets a call from someone. On the other hand, Anupama tells Anuj that their relationship is unique as it has equality, friendship, hope and respect. Anuj agrees with Anupama, when she says that they just want companionship from their relationship. Anupama takes out a chit and starts speaking Lord Krishna and Goddess Radhika’s poetry. Through this poetry Anupama tells Anuj, what he means to her. Anuj feels Anupama’s poetry, very romantic. He asks what is in her heart.

Anuj further tells Anupama that his 26 years of his one-sided love finally became two sided today. Both Anupama and Anuj get overwhelmed. Anupama repeats her 7 magical words again and again on Anuj’s continuous requests. Anuj thanks Anupama again and again and gets down on his knees getting overwhelmed. Anupama also bends on her knees and asks Anuj if he wants to grow old with her. Anuj tells Anupama of course he wants to grow old with her. He also tells Anupama that he wants to be with her only. Anuj asks Anupama why she took so long to say 7 magical words to him. Anupama tells Anuj that she took less time than him to express her feelings to him.

She sarcastically tells Anuj that if she would have expressed herself with his speed, then another 26 years would have passed. Anupama also tells Anuj that they would have been lying in ICU together and she would have been asking him if he would spend his next life with her. Anuj laughs emotionally with Anupama. He again and again requests Anupama to repeat her 7 magical words. Anupama again repeats her 7 magical words for Anuj. They hold each other’s hand and feel overwhelmed with each other. “Aaye ho meri zindagi tum bahar banke” plays in the background. Anuj keeps Anupama’s seven words and poetry chit in his pocket.

Anupama wipes Anuj’s tears, cleans his specs and makes him wear them. Anuj plays with Anupama’s saree like a kid. They hold each other’s hands. Later they cut #MaAn cake together and make each other eat it. In the next episode, Anupama will decide to return to home, but Anuj will stop her on the terrace. Anuj will tell Anupama that they could spend the night on the terrace only. Anupama will make an excuse of her and Anuj freezing in the cold. Anuj will tell Anupama that he understood her worry about people’s thinking. Next morning, Anuj will ask Anupama if everything happened for real on the terrace or was it his dream. Anupama will pinch Anuj’s hand to make him believe that everything was true. Both of them will look at each other with love.

Reviewed Rating for Anupama 18th February 2022 Written Update Maan Union: 5/5 This rating is solely based on the opinion of the writer. You may post your own take on the show in the comment section below.