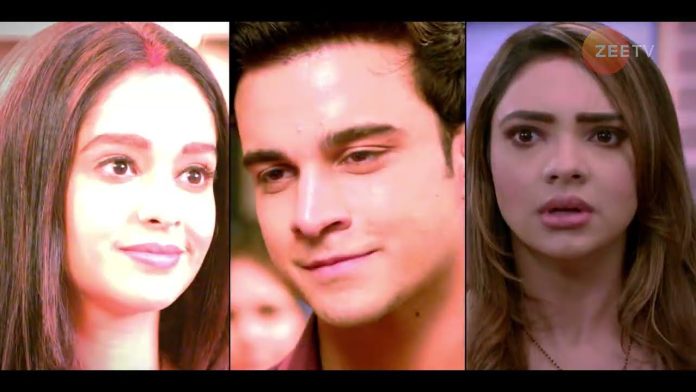 Kumkum Bhagya Prachi Sindoor Best Promo 21st February Rhea tells the Inspector that Prachi isn’t Ranbir’s wife. Prachi tells that she is Ranbir’s wife and she can prove it. She proves that Ranbir has married her in the temple. She shows the marriage certificate as a proof. Inspector tells that Ranbir can get punished for polygamy because he has married Rhea when he was already married to Prachi. Rhea is shocked when his marriage with Ranbir is invalidated. Inspector asks the constable to put Ranbir in the lockup. Pallavi gets helpless to save her son. She tells that Prachi is her bahu. She brings Kumkum. She asks Ranbir to fill the Kumkum in Prachi’s hairline. Prachi reminds Pallavi the challenge that she will not wear the Kumkum until Ranbir fills it himself.

Pallavi asks Ranbir to go ahead. Ranbir fills the Kumkum in Prachi’s hairline and feels glad that Prachi has fought for their marriage, which signifies their love. He happily gets hopes of a union with Prachi. Prachi succeeds in proving her marriage and also making Pallavi accept her as Bahu. She tells that now Pallavi can never say that she didn’t see Ranbir filling Kumkum in Prachi’s hairline. Prachi warns Rhea to back off and not chase Ranbir from now. Rhea gets a huge defeat which wasn’t unexpected. Pallavi regrets that she had provoked Prachi to take such a step. Vikram and Dida get happy and feel proud of Prachi, seeing her fight for her rights on Ranbir. Ranbir is also happy, but he is still unaware of Prachi’s pregnancy. Will Rhea learn about Prachi’s pregnancy and plan to harm her baby before Ranbir gets to know? Keep reading.

Reviewed Rating for Kumkum Bhagya Prachi Sindoor Best Promo 21st February: 5/5 This rating is solely based on the opinion of the writer. You may post your own take on the show in the comment section below.