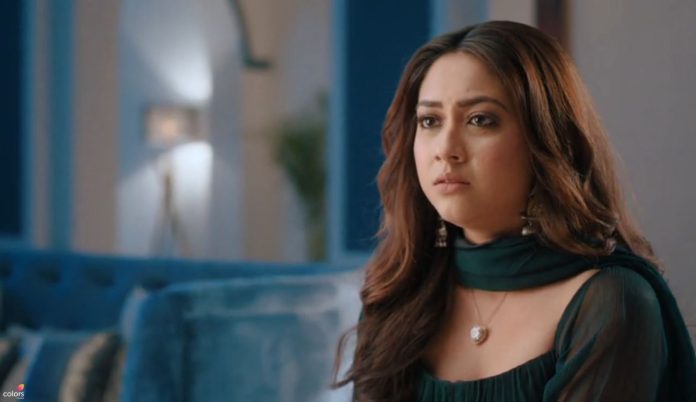 Fanaa 18th February 2022 Written Update Agastya’s plan stuns Pakhi Agastya announces Ishaan’s bachelor party and asks everyone to enjoy it. He praises Mohit’s look. Agastya offers Ishaan to have a drink but he refuses. Ishaan says he will not drink till his marriage. Agastya goes to bring a mocktail for Ishaan. Pakhi is seen with Tanya and Shanaya at a restaurant. Tanya asks Pakhi to open the box and wear her Tiara. Pakhi opens the box and gets shocked to see a scary skeleton mask and fake blood in it. Pakhi’s mood gets ruined.

Tanya tells Pakhi that she is going to scold the Tiara seller. She calls Yug and pretends to talk to the seller. Yug threatens Tanya to keep Pakhi at the same restaurant till his next orders. He sacres Tanya by threatening her to kill her mother. Tanya gets scared and agrees to follow Yug’s orders. Shanaya scolds Yug, thinking him to be a Tiara seller. Yug pretends to be a Tiara seller and apologizes to Shanaya. On the other hand, Agastya makes Ishaan drink the mocktail spiked by him.

Shanya scolds Yug again and disconnects the call. Pakhi asks Tanya why no one came to her bachelor’s party. As per Yug’s orders, Tanya tells Pakhi that she by mistake put the wrong date on bachelors party invitation. Shanaya gets angry at Tanya. Tanya apologizes for goofing up big. At Bachelor’s party Agastya makes everyone wear animal masks for the party. Ishaan feels uncomfortable seeing people in animal masks. A waiter comes to Ishaan and offers him a drink. Ishaan hears the waiter saying that won’t ever become his. He also hears the waiter saying that Pakhi belongs to Agastya.

Agastya’s spiked drink shows its effect on Ishaan. He starts accusing Agastya of trying to snatch Pakhi from him. Ishaan tells everyone that Aagstya loves Pakhi and wants to separate him from Pakhi. He says Agastya is continuously making evil plans to make him look bad. Pakhi’s father gets angry and asks Ishaan what rubbish he is saying. Ishaan continues accusing Agastya of trying to snatch Pakhi from him. He tells Agastya that Pakhi belongs to only him. Agastya pretends to be innocent and also pretends to support Ishaan. On the other hand, Shanaya tells Pakhi and Tanya that they will party even if their guests didn’t arrive.

She gives Pakhi and Tanya an idea to gatecrash the boy’s party. At Ishaan’s bachelor Party, Ishaan’s father apologizes to Pakhi’s father for Ishaan’s behavior. Agastya calms the matter and asks everyone to enjoy the party. He again makes everyone wear animal masks. Agastya wears a lion mask and walks towards Ishaan. Drunk Ishaan gets scared seeing Agastya in a lion mask. He tries to run away from Agastya in a lion’s mask but gets stuck between everyone wearing different animal masks. Ishaan’s fear grows. He asks how so many came here and also asks for help.

Ishaan’s father says he doesn’t know what happened to Ishaan as he never did anything like this before. They leave the party feeling guilty. Later at Pakhi’s home, Pakhi’s mother applies medicine to Pakhi’s father’s wound. Pakhi’s family doubts Ishaan and feels angry at his behavior. Pakhi’s uncle and aunt also speak ill against Ishaan. Pakhi’s father says they made a mistake while selecting a groom for Pakhi. He refuses to get Pakhi married to Ishaan. Pakhi asks her father to let Ishaan give justification for his misbehavior with him. She says to her father that she doesn’t feel that Ishaan could misbehave like this with him intentionally.

Pakhi’s father gets into thinking. Agastya feels very angry. Pakhi’s father stops Ishaan and forgives him. He hugs Ishaan making Pakhi happy. Pakhi’s father asks everyone to forget everything and move on. Everyone smiles with each other. Pakhi thanks the universe for saving her love from getting proved wrong. Ishaan walks to Pakhi and holds her hand. He apologizes to Pakhi for misbehaving with her father. Pakhi tells Ishaan that he wasn’t at fault. She says it’s good that Agastya found out the truth. Both Pakhi and Ishaan hug each other.

Agastya sees them hugging and feels angry. He decides to make Pakhi realize her mistake of choosing Ishaan over him in every ritual. Agastya says that Pakhi would bear the pain due to Ishaan daily. He says it’s Pakhi’s punishment for not identifying her real love. Agastya goes to Pakhi and Ishaan. He tells Pakhi that she is very rude as she didn’t thank him for saving her marriage. Ishaan hugs and thanks Agastya. He apologizes to Agastya holding his ears for misbehaving with him too at the party. Agastya tells Ishaan that his thank you won’t work as he has to give Pakhi to him. This shocks Pakhi and Ishaan. Agastya tells Ishaan that he wants to take Pakhi for one whole day for her marriage shopping. Ishaan allows Agastya to take Pakhi for shopping with his pleasure.

Ishaan and Pakhi leave for tea. At Ishaan’s home, Ishaan shares his fear with Shubham. He hopes that nothing wrong goes in his and Pakhi’s engagement. Shubham asks Ishaan to not worry as Pakhi won’t wear anyone else’s ring except his. At Agastya’s home, grandmother asks Agastya why he included Ishaan’s doll in his and Pakhi’s doll house. Agastya tells his grandmother that Ishaan is included for some days as he (Agastya) and Pakhi are for forever. Worried Grandmother tells Agastya that she thought that he compromised his love for Pakhi’s happiness. Agastya tells his grandmother that weak people make compromises. He says he can’t fall weak as his love for Pakhi is true.

Agastya says he is doing all this to make Pakhi realize that she is made for him. He says Pakhi’s every marriage ritual will actually happen with him. Grandmother tells Agastya that she is very scared. Agastya asks his grandmother to make arrangements for marriage and not worry.

In the next episode, Agastya will tell his grandmother that soon he will make Pakhi the daughter in law of Raichand house. Agastya will be seen performing all marriage rituals simultaneously with Pakhi. On the other hand, everyone including Pakhi will get shocked to see red haldi on Pakhi’s face.

Reviewed Rating for Fanaa 18th February 2022 Written Update Agastya’s plan stuns Pakhi: 3/5 This rating is solely based on the opinion of the writer. You may post your own take on the show in the comment section below.