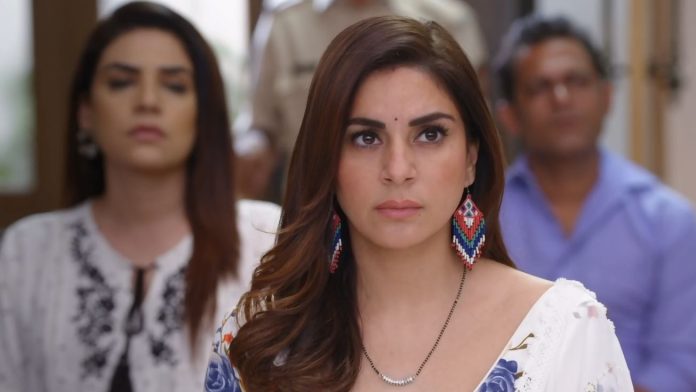 Kundali Bhagya 22nd February 2022 Written Update Big trial Preeta tries to frame Mona in an attempt to murder case, and get her ousted from the house, knowing she is dangerous for Mahesh. Prithvi knows that its just a drama and goes to see Preeta, who doesn’t deter to challenge him. He tells that Preeta should start down counting from now, because she is the one who would be receiving the family hatred. Preeta tells him that the same advice goes to him, he will soon get exposed and thrown out of the house when the family learns that he has been paying Mona to spike Mahesh’s food purposely to make Mahesh appear like a mentally unstable person. She tells him that she has seen him paying the money to Mona and asking her to give the same food to Mahesh as before. She tells that his bad doings come out in front of her eyes on its own, she always knew his truth and now got more certain. He gets worried that she had learnt his plans. What would Prithvi do now? Keep reading.

Earlier in the show, Prithvi reminds the family what happened in the morning, when Mona had threatened of sending Mahesh to the asylum. Preeta tells that nobody understands her doing. She thanks Mona for making salad for her on her request. She eats the salad. She tells that its really amazing. She suddenly screams, pretending dizziness. Karan gets stressed when she falls down on the floor. Karan and Rakhi rush to check Preeta. Prithvi cares a damn for Preeta. Preeta asks Karan to call the police instead the doctor. She accuses Mona, saying she has added something in the food. Prithvi gets alert of Preeta’s plan.

The family attends Preeta. Prithvi tells that he has called a doctor home. Preeta asks Mona what did she add in the salad that she fainted. She tries to make Mona admit the truth. Natasha interrupts Preeta. She tells that Mona should not face Preeta’s anger. She feels Preeta is angry on Mona and intentionally doing everything. She asks Mona to apologize to Preeta, who is the owner of the house. Prithvi thinks Natasha is playing a good game and answering Preeta. He knows that Natasha is trying to defend Mona. Mona refuses to apologize to Preeta. She tells that Preeta is lying, she didn’t add anything in the salad. Preeta accuses her for trying to kill her.

She tells that she will go to her room and take rest. She acts dizzy. She thinks Karan isn’t offering her help when she needs it the most. Karan holds her to save her from falling. Preeta thanks him. She tells that she doesn’t want his help. He insists of dropping her to the room without following her orders. Natasha thinks its good that she has come in Preeta’s good books, and also saved Mona. She tells them that she will get tea for everybody. Prithvi thinks Preeta has dug a pit for herself. He goes to meet Preeta. Rakhi wishes to know how to gather her shattered relations. Kareena asks her not to blame herself. Mona tells that she didn’t add anything in the salad, Preeta is just pretending so.

Karan asks Preeta about her drama. Preeta tells that she doesn’t want anyone with her. He asks her what does she want, why does she want their attention. He tells that he got the house owner to the room, not his wife. He asks her to take rest until the doctor comes. He asks Preeta not to fight him all the time. Sameer tells that he has come to offer help to Preeta. She asks him to take Karan with him. Karan tells that he is going on his own. He goes away annoyedly. Sameer also goes after her. Preeta has an aim to bring Mahesh out of the basement. Prithvi thinks its Preeta’s defeat and his victory. He pities her. He boasts of his smartness.

He fools Kritika by his sweetness. He tells that she got late in identifying him. He adds that he feels tired and suffocated in the house because of Preeta, who is trying to prove Mona and him wrong. He defends himself. Kritika tells that Mona added something in the water, or maybe Preeta is doing a drama to settle scores with Mona. He tells that Mona takes care of Mahesh, she will never try to harm Preeta. He blames Preeta for framing Mona for a purpose, because he has got Mona home as Mahesh’s nurse. Kritika tells that Preeta won’t succeed this time, he will make sure that Preeta doesn’t come between them. She promises him. He hugs her. He promises to use her against Preeta.

He finds her really stupid. He wants to show Preeta who is the real boss. He thanks Kritika for everything. He goes to meet Preeta. He asks Preeta how is she feeling. He tells that she will feel really bad after something. He jokes on her that her truth will get exposed. He tells that doctor will come and prove that the food didn’t had anything wrong in it, Preeta will be proved wrong, everyone will know that Preeta intentionally framed Mona just to fire her from the job, because Preeta is just interested in money. He threatens to prove her mentally unstable. He tells that he will snatch everything from her, and then he will get everything back on his name. He asks her to get ready to lose.

She tells that he will be getting exposed, his truth is known to her and even his actions are known. She confronts him for bribing Mona. She tells that she is challenging him, she will expose him and show him where he belongs. She asks him to get out of her room. He asks her what does she want to prove. He admits that he has given money to Mona, but she can’t prove that he gave it for a wrong purpose, he was paying Mona for Mahesh’s care. He adds that he can lie anything to cover up for his generous deed with a negative intention. She tells that she knows that Mona’s mother died two years back because of multiple organ failure.

She adds that she knows everything about the ones who work for us, his game is over. He tells that doctor will testify against her, those who work for her will prove her a liar and defeat her. He challenges to defeat her and make her leave the family. Shrishti, Biji and Janki arrive to meet Preeta. Sherlyn misbehaves with them. Shrishti asks Rakhi about Preeta. Rakhi tells them about Preeta’s blame on Mona. Natasha tells that Preeta was throwing many tantrums today. Shrishti scolds her for speaking against Preeta. Natasha asks her not to twist her words and make her appear bad in front of the family. She introduces herself to Biji. She tells that she always praises Preeta. Biji finds Natasha sweet and innocent. Natasha thinks Biji doesn’t know her reality.

Reviewed Rating for Kundali Bhagya 21st February 2022 Written Update Preeta warns: 4/5 This rating is solely based on the opinion of the writer. You may post your own take on the show in the comment section below.