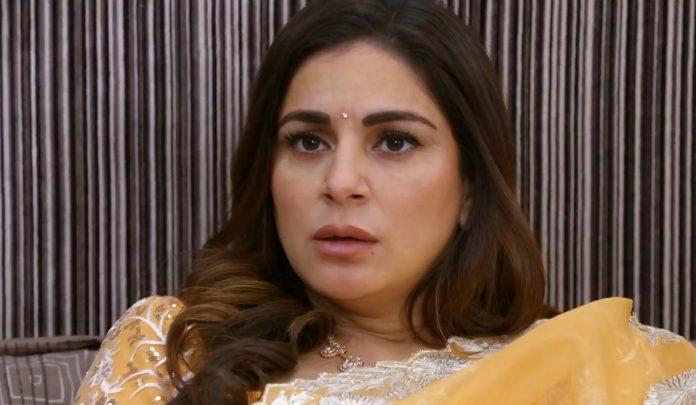 Kundali Bhagya 23rd February 2022 Written Update Preeta poisoned Karan happens to meet Preeta and gets into an argument again. He reminds her words that she asked the family to follow the rules, only then they can stay back in the house. He tells that he trusts her or not, it doesn’t matter now. She replies that it matters to her, she expected the family to trust her when she was keeping every relation by her heart. She reminds what he did with her two years back. She tells that she hopes that her relations trust her. He asks her to question herself, why he doesn’t trust her. Doctor comes to examine Preeta. She tells Karan that she will run some tests to conclude the doubts true. She tells that if her doubt is right, then she will be administering the injection to Preeta quickly. Karan asks what doubt she has. Doctor tells that she suspects that Preeta is poisoned. This shocks Karan and his family.

Mona get worried because she didn’t spike Preeta’s salad. Preeta recalls that she has concepted the poisoning drama to accuse Mona and threaten her of the jail. She had added the poison in the salad herself. She tells Shrishti that Mona has tried to kill her. She tells that she scolded Mona in the morning, so Mona has done this against her to take revenge. Shrishti asks Karan to call the police. Mona gets terrified. Preeta tells that Mona will either get arrested or leave the house. Shrishti later compliments Preeta for her marvelous acting. Preeta tells her that it was all true, she had poisoned her own food. Biji gets angry on Preeta for risking her life. Preeta tells that she had to take this step to save Mahesh from Prithvi.

Kareena and Kritika taunt Biji about Preeta. Biji asks Kareena to speak less. Bani and Biji argue to defend their daughters. Biji tells that Kareena has insulted Preeta first. She asks Bani not to feel bad. She tells Mona that she will punish her if she finds out Mona’s mistake. Doctor arrives there. Kareena asks them to come with her to Preeta’s room. Shrishti asks Preeta to take rest. Biji asks Preeta what did she eat that she fell ill. Preeta tells that she ate the salad after speaking to her on call. Doctor speaks to Preeta. Preeta tells that she felt dizzy and restless after eating the salad. Prithvi tells that he doesn’t want to disturb the checkup, but wants to give an important information, Preeta suspects Mona had added drugs in the salad. Doctor tells that it’s a big blame on a nurse whose duty is to care for the patient.

Shrishti and Biji tell that many people in the family feel Preeta is acting, but Preeta would be saying the truth. Preeta tells that she is sure, Mona has added the poison in her salad, because she had scolded Mona before lunch, Mona has done this to take revenge on her. Sameer asks Shrishti to wait until the doctor checks and tells them the truth. Doctor takes Preeta’s blood sample. She tells that she will get the reports soon. She tells Karan that she also has a doubt that Preeta has been poisoned. Karan is really worried knowing Preeta’s statement was true. Prithvi tells that maybe Preeta is suffering from food poisoning. Doctor tells that they will know it when the reports come.

She asks them to go and let Preeta rest. Karan stays back. Preeta thinks Prithvi is confident that he can save Mona, but this time, his game will be over. Mona asks Prithvi to stay back and support her. She tells that she didn’t give any poison to Preeta. He knows it. She tells that she has always supported him by risking her job. She reveals that she has done everything for him. He corrects that she has done everything for herself, for money. He adds that even he has taken a big risk by involving her in the plan. He wants to make sure that Mona doesn’t get accused. He tells that he knows what will happen next, the doctor will speak in their favor, Preeta is faking the poison drama, they don’t need to worry at all.

Preeta asks Karan if he doesn’t believe her that she had been poisoned. Karan asks her planning. She wants him to trust her, else see the reports. He tells that he didn’t understand what she wants, she wants the family to follow her rules and obey her if they want to stay in the house, now it doesn’t matter if he trusts her or not. She tells that she expected him to trust her, she had been true and dedicated to her relations but no one believed her. He answers that he is always the same, he listens to his heart, she didn’t identify him well, she has changed a lot. He tells that she has come to get the property and rule over them. He calls her equally at fault. He asks her if she tried to win his trust.

She tells that she has tried a lot. He asks her if she told someone that she missed them. He reminds her words that she came for the money and property. He calls her stone-hearted. He tells that she didn’t tell her feelings to him. He learns that the reports have come. He goes to ask the doctor. Preeta cries and thinks she is better if she is alone. Prithvi wants Preeta to get accused when the truth comes out. He plans to accuse Preeta badly. He dreams that he will prove Preeta as a Luthra enemy. He wants to attack Luthras emotionally and break them down, to become the hero of the family again. Shrishti asks the doctor about the reports, if Preeta had been really poisoned or not. Prithvi stops the doctor and asks her to let Preeta come downstairs and know the results.

Mona tells that she will take legal action against Preeta for attempting to ruin her career, if its proved that she is innocent and didn’t add any poison in the food. Karan asks her to let the truth come out. Preeta asks the doctor to read the reports for everyone. She tells that Mona can take legal action against her as she just said. She adds that she will send Mona to jail if its proved that Mona added the poison in the food. Doctor tells that she was wrong to trust Mona. Prithvi tells that Preeta is just doing the drama.

Doctor tells that Preeta is saying the truth, Preeta has really been poisoned by Mona. She reveals the reports. She scolds Mona for doing so wrong. She tells that real poison trace is found in the blood, someone had added poison in Preeta’s food purposely, and it could be Mona. Karan loses his cool. Preeta tells that she knows Mona has done this. She asks them to check Mona. Doctor tells that she has to give anti-poison injection to Preeta first. Prithvi wonders if Mona really did this without informing him.

Reviewed Rating for Kundali Bhagya 23rd February 2022 Written Update Preeta poisoned: 5/5 This rating is solely based on the opinion of the writer. You may post your own take on the show in the comment section below.