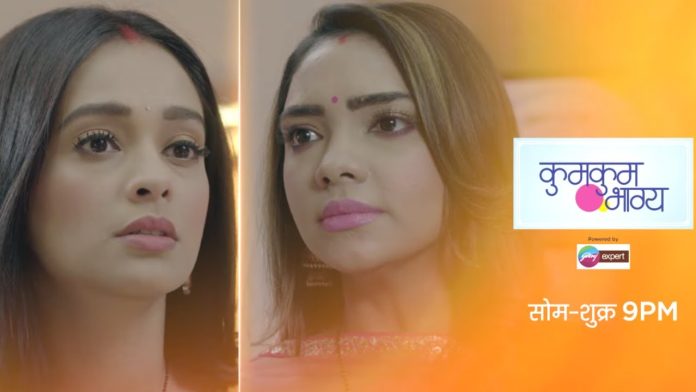 Kumkum Bhagya 24th February 2022 Written Update Prachi’s pregnancy Prachi meets Dr. Madhu, unaware th.at she is being followed by Rhea. Dr. Madhu tells that Prachi’s pregnancy has become complicated now, because of stress. She asks Prachi to be very careful and take care of her baby. Rhea is shocked to hear this pregnancy truth. Dr. Madhu sees Rhea at the door and asks her if she has an appointment. Prachi turns and sees Rhea. Rhea comes inside and confronts Prachi for meeting gynac Dr. Madhu in the maternity clinic. She tells that Prachi can’t hide anything from her now because everything is crystal clear for her. She scolds Prachi for hiding such a big truth. She goes home and asks Ranbir if he knows the pregnancy truth. Ranbir asks whose pregnancy is she talking about. Prachi overhears them. She worries that Rhea will tell about her pregnancy to Ranbir, which she doesn’t want.

Rhea informs about Prachi’s pregnancy to Aaliya, who conspires to frame Prachi in bad light again by calling the baby as Siddharth’s. Rhea speaks to a doctor to get the fake reports. She tells that nobody can stop her from exposing Prachi now. She decides to strike on Prachi’s character once again and freshen her wounds. She doesn’t want Ranbir to believe Prachi. Dida blesses Prachi and Ranbir to be safe from everybody’s bad sight. Rhea tells that very soon Prachi’s Kajal will be becoming a black stain on her face. The Kohlis throw a big party to acknowledge Prachi and Ranbir’s relation. Will Rhea ruin it all by staining Prachi’s character again? Keep reading. Watch the latest promo below.

Prachi rushes to meet Dr. Madhu. Rhea asks the nurse about Prachi. She tells that she has come to give Prachi her phone. She cleverly asks the details of Prachi’s visit. She lies to the nurse that she is Prachi’s best friend. She shows their picture. She learns that Prachi has gone to Dr. Madhu’s cabin. Rhea thanks the nurse for the information. Other side, Aaliya asks Pallavi why is she asking Ranbir about his feelings for Prachi when she knows the answer already. She tells that Ranbir would have told her the same that he loves Prachi, not Rhea. She feels Prachi has a upper hand, they have to answer Prachi but after finding a solution. She asks Pallavi to make a plan.

She suggests that they ignore Prachi and make Ranbir keep Rhea’s responsibility. She wants to sort out the matter. Pallavi tells about Vikram and her anniversary. She doesn’t want any fights in the house until then. She asks Aaliya not to make any plans. She thanks Aaliya for saving her from making another mistake. Aaliya assures that she would plan something after the anniversary party. Prachi gets the checkup done, while Rhea reaches the door. Dr. Madhu asks Prachi the reason for her stress. Prachi feels stressed because of Pallavi and Rhea. She remembers that she was feeling unwell after an argument with them. She admits that she is in stress. She also recalls Ranbir’s hurtful words.

She tells that she feels pain sometimes when she is in stress. Dr. Madhu tells that she was afraid for this, Prachi has complications in her pregnancy. Rhea wonders why did Prachi come to see a gynac. Dr. Madhu suggests some exercises to Prachi to lessen the complications. Rhea appears shocked. Meanwhile, Ranbir isn’t able to focus on work. He doesn’t want to think of Prachi. He feels something is not right. Vikram comes to spend time with him. Ranbir tells that he is feeling strange. Vikram calls it normal. Ranbir sounds serious. He tells that he wants to be with Prachi, he is getting this feeling. Vikram tells that its good, nobody is stopping him.

Ranbir tells that Prachi is stopping him, she always taunts him. Vikram tells that the awkward moments will always be there until Ranbir understands Prachi again. He takes Prachi’s side knowing she is right. He tells Ranbir that some people are trying to prove Prachi wrong. Ranbir is glad. Vikram tells that Prachi won’t break down, she is strong to stick to her principles. Ranbir tells that he is really thankful that Vikram likes Prachi and believes her. Vikram tells that Prachi is like his daughter. He hugs Ranbir and assures that he is always there for her. Ranbir thanks him. He goes to see Prachi. Rhea misses to hear about the baby. Dr. Madhu asks Prachi to not take stress, just pregnancy doesn’t complete a responsibility, it ends when she delivers the baby safely. Rhea tells Dr. Madhu that she is with Rhea.

Dr. Madhu goes on rounds. Rhea asks Prachi to not hide anything from her. Ranbir looks for Prachi in her room. Rhea tells that she had a doubt on Prachi since a long time, because Prachi is like a thief who has stolen her sister’s happiness and love. She adds that Prachi has come back to ruin their happiness. She questions Prachi about hiding the truth. Shahana arrives there and tells Rhea that even Ranbir has hid this truth. Rhea asks Shahana what is she doing there. Shahana tells that Ranbir already knows the truth of her pregnancy. Rhea and Shahana get into a moment. They both insult each other. Prachi covers up the truth of her pregnancy. Rhea leaves from there in a huff.

Prachi thanks Shahana for coming on time. Shahana tells that she had seen Rhea following Prachi by ignoring Ranbir. Prachi tells Shahana that she was experiencing pain in the morning and came to meet the doctor. Shahana tells that Rhea will go and ask Ranbir about her pregnancy and it may lead to a problem. They also rush home. Rhea reaches home and meets Ranbir. He tells that Pallavi was looking for her. Rhea indirectly asks him about Shahana’s pregnancy. Prachi keeps an eye on them. She knows that Rhea will ask him about the pregnancy. He asks her what does she mean. Prachi interrupts. Rhea tells him that Shahana is pregnant. He expects Ranbir to say the truth to her. Prachi thinks to make them fight. She asks him to never hide the truth from his so-called wife Rhea. Ranbir tells Rhea that he knew about Shahana’s pregnancy, she doesn’t want anyone to know it, he can’t break her trust and make it embarrassing for her by revealing the pregnancy news.

Prachi asks them to thank her for making them a real couple and fight. Rhea and Prachi get into an argument, while he gets enough of the drama. Prachi tells that she can stop Rhea from getting close to Ranbir. She feels nausea and runs away. Rhea wonders what happened to Prachi suddenly. Rhea follows her. Prachi locks the door. Rhea asks Prachi is she okay. Prachi hides the truth, but Rhea suspects that Prachi is locking her secret. Rhea decides to find the secret somehow. She connects the dots and realizes that Prachi is experiencing the pregnancy symptoms.

Reviewed Rating for Kumkum Bhagya 24th February 2022 Written Update Prachi’s pregnancy: 4/5 This rating is solely based on the opinion of the writer. You may post your own take on the show in the comment section below.