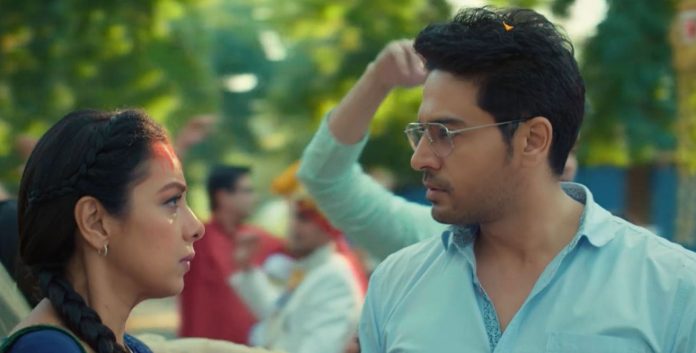 Anupama 24th February 2022 Written Update Proud moment Anupama and Anuj are watching TV and Anupama praises someone’s dance. She says he is a good dancer and she will learn from him. Anuj is seen helping Anupama with the vegetables. Electricity goes off. Anuj says it’s good as he got the time to say what is in his heart. He reminds Anupama that earlier she faced difficulty in understanding his shayaris. Anuj tells Anupama that later she started understanding his shayaris and then him too. He also tells Anupama that in some time, they also started completing each other’s incomplete conversations.

Anuj says love has many stages/steps like a temple. He tells Anupama that they have climbed the steps of the love temple and just needs to go inside. Anupama looks at Anuj awestruck. Anuj says he has a bad track record in revealing things in his heart. He says he took 26 years to say the first thing in his heart and now doesn’t want to waste time in revealing the second thing in his heart. Anuj takes Anupama’s hand in his hand and proposes to her for marriage with a ring made out of vegetable leaves. He tells Anupama that he is doing this for himself, not because of the pressure of society, Baa’s taunts, not for children and not even for Malvika.

He receives a message from Samar. Anuj tells Anupama that they should go to the academy as Samar is waiting for them there. Anupama keeps the veggie ring given by Anuj with her. At Shah house, Baa asks Bapuji why he is sitting with an open passbook today. Bapuji replies that he is seeing how much money he has in his account. Baa tells Bapuji that he would have less money in account. She asks him to ask Vanraj for money if he needs it. Bapuji refuses to take money from Vanraj. He asks Baa about the whereabouts of the policy of Rs. 35,000 that got matured. Baa asks Bapuji why he needs so much money. Bapuji says he wants to do something for his loved ones. He leaves, asking Baa to take out the policy as he needs to go to the bank.

Baa wonders why Bapuji needs so much money. Kavya asks Baa what happened. Baa tells Kavya that her Bapuji needs 35,000 Rs. Kavya casually asks Baa to give the money to Bapuji. Baa asks Kavya how she can say this so casually. Kavya tells Baa that they won’t have a lack of money as Vanraj is handling a big business. She says money will rain on them now. Baa says they will see it later and can’t spend so much money right now. Kavya asks Baa to let Bapuji do what he wants to as she can’t stop Bapuji anyhow. Baa says the question is why Bapuji needs this much money. She wonders and says if Bapuji is going to give this much money to Anuj and Anupama. Kavya tells Baa that if this is the matter really, then Vanraj will feel very bad.

On the other hand, Anuj saves Anupama from getting hit by a bike on the road. They see someone’s baraat near them. Anupama looks at the ring given by Anuj to her. People dancing in Baraat mistakenly pull Anuj and Anupama in between them. A pooja plate falls from a woman’s hand. Vermilion from the plate falls on Anupama’s forehead and hairline. Anuj and Anupama stare at each other. Anupama checks the vermilion fallen on her hairline and forehead. Baraat leaves ahead, Anuj cleans vermilion from Anupama”s hairline using his handkerchief. Both of them give a smile to each other. At Shah house, Pakhi is secretly talking to some boy named Vivaan. She tells him that her Baa has become Sherlock Holmes these days and is keeping an eye on her. Pakhi tells Vivaan that they need to be careful from now onwards.

She disconnects the call seeing Kinjal coming towards her. Kinjal checks a jar. She tells Pakhi that she is her sister in law but she (Pakhi) can consider her her friend. Kinjal also tells Pakhi that she just came out of her teenage life and can understand her feelings more as compared to Baa. She further tells Pakhi that she can share her feelings and problems with her. Pakhi tells Kinjal that her friends were insisting her to come for a sleepover, but she refused. Kinjal asks her why. Pakhi replies that Baa won’t understand and Vanraj doesn’t have time to understand her. She says it would have been different if Anupama would have been here.

Kinjal leaves telling Pakhi that even if Anupama isn’t available, she is there for her. Pakhi says she knows that Kinjal will understand as well as support her. She thinks that Kinjal won’t be able to support her in front of Baa and Baa would scold both Kinjal and her. She misses Anupama. On the other hand, Anuj tells Anupama that he understands her fear. He shocks Anupama by telling her that he never wants to make her Mrs. Anuj Kapadia. Anuj tells Anupama that by changing her surname, a woman alway loses her real identity. He also tells Anupama that she was always known by other’s name or relations and lost her own identity as Anupama. Anupama gets teary eyed.

In the next episode, Baa will ask Bapuji why he brought so many things. Samar will say that Bapuji is giving a party on the 18th. Vanraj will ask Samar what is on 18th. Samar will say that it’s Anupama’s birthday on the 18th. This will shock Vanraj and Baa. Later Anupama will be seen discussing Anuj’s marriage proposal with Bapuji. She will tell Bapuji she fears marriage after getting a big deception in her first marriage. Bapuji will tell Anupama that both Anuj and her, very well understand her fear and problems. He will explain to Anupama that she and Anuj both love each other and it’s a two sided love. Bapuji will further explain to Anupama that love always finds its way. He will ask Anupama to make this year’s birthday as her Happy Birthday for real.

Reviewed Rating for Anupama 24th February 2022 Written Update Proud moment: 5/5 This rating is solely based on the opinion of the writer. You may post your own take on the show in the comment section below.