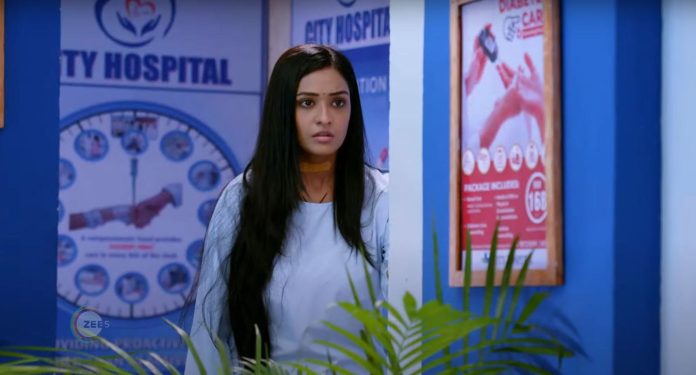 Bhagya Lakshmi 25th February 2022 Written Update Truth for Lakshmi The family rushes Rishi and Lakshmi to the hospital. Virender informs Dadi about Rishi and Lakshmi’s injury. He requests the doctors to save both the children, who equally matter to him. Malishka blames herself for Rishi’s condition. She can’t forgive herself. Kiran hugs to console her. Neelam sheds tears for her son. Ayush cries for Rishi and Lakshmi. Karishma pacifies her son. She tells him that she loves him a lot, ad he can’t imagine it. She asks him to be brave. Ayush knows that Karishma loves him a lot. Karishma consoles Malishka. Ayush looks for Shalu, who is alone with Lakshmi. Rishi is treated for the bullet removal surgery. Lakshmi lies unconscious. Shalu prays that Lakshmi gets fine for their sake. Ayush gives her hope that Lakshmi will get fine and also save Rishi. Bani arrives there to console Shalu.

Ayush also cheers them by giving them a strong hope. He tells that Rishi is important for him as much as Lakshmi matters to them. He tells them that they should be positive and not cry. Shalu thanks him for pacifying Bani, who is emotionally weak. Ayush hugs Shalu. They share a moment. Doctor tells them that their prayers have saved Lakshmi, the bullet just touched her arm, she has no danger to her life. Virender is glad to hear about Lakshmi. He thanks the doctor. He worries when he learns that Rishi is critical. At home, Dadi prays for Rishi and Lakshmi’s lives. Lakshmi gains consciousness. She meets her sisters. She asks about Rishi. Shalu doesn’t tell her that Rishi is critical. Lakshmi worries for Rishi when she learns from the nurse about his condition.

Lakshmi goes to see Rishi. She comes across Neelam and Malishka. She overhears their conversation about Rishi’s Markesh Dosh. Neelam tells Malishka that Lakshmi always protects Rishi’s life when even she is unaware of her powerful Kundali that can eradicate the threat on Rishi’s life.

She adds that only Lakshmi can save Rishi from the Markesh dosh. Lakshmi is shocked by this truth. Neelam tells that Lakshmi can save Rishi from the threat, the marriage was meant to stay for just one year, then Rishi was going to leave Lakshmi, but Malishka came in between. She swears to not let anyone come in Rishi’s life. She tells that just Lakshmi will come back in Rishi’s life, no other girl can enter his life. She cries for her son, while Malishka cries on hearing Neelam’s decision against her. Lakshmi is shell shocked on hearing the entire truth, the real purpose of Rishi and Lakshmi’s marriage. What will be Lakshmi’s decision after this huge revelation? Keep reading.

Virender tells Karishma that the doctors are arranging blood for Rishi. Neelam asks the doctor about Rishi. Doctor tells her that Rishi is okay and out of danger, but he can’t tell them anything. He calls it a miracle that Rishi got saved and didn’t get shot on his heart, that he was pushed back and fell down at the time when he was shot. He tells that Rishi is alive because the bullet didn’t pierce his heart. Neelam realizes that Lakshmi had pushed Rishi in time and saved his life. She feels indebted to Lakshmi. He tells that Rishi will get saved by their prayers. He asks them to pray for another miracle, because Rishi is still critical, he has to gain consciousness within 24 hours. They worry for Rishi.

Neelam tells that she has told everyone about Rishi’s life that’s in danger. She asks them to see the result of the Markesh dosh. She tells that Lakshmi has saved Rishi from getting shot on his heart, she had pushed him back and saved his life once again, she has done this miracle, she is important for his life. She asks Malishka to understand this. She rebukes Malishka for coming between Rishi and Lakshmi. She holds Malishka responsible. She tells that she will not let Malishka or anyone else come in his life, just Lakshmi will come in his life at any cost. She decides to bring Lakshmi back in his life. Malishka cries. Neelam tells that she had already asked Malishka to wait for a year. She adds that she can do anything to save Rishi.

Malishka argues with her. She tells that he has risked his life to save her, because he loves her. She calls herself Rishi’s happiness. She begs Neelam to not separate her from Rishi. Virender tells that he would have chosen Lakshmi for Rishi even when he wasn’t under a threat. Malishka asks them not to decide such. Virender asks her what about Lakshmi’s love, she is selfless and saved Rishi again, when Rishi isn’t in her husband now. He tells that Rishi and Lakshmi got separated, Lakshmi has seen Rishi’s love for Malishka, Rishi did wrong with Lakshmi to hurt her heart, she had many reasons to hate him, but still she saved his life, she loves him truly, she is still dedicated to him.

She asks Malishka not to snatch Rishi from her by claiming her love. Virender understands Neelam’s fears well and consoles her. Lakshmi looks for the ICU to see Rishi. Pandit asks Neelam to keep hope. Malishka rebukes him for spreading the superstitions and brainwashing Neelam. She tells that Markesh Dosh doesn’t exist, Rishi fell in danger just like other people at the bank. She adds that the bank guards have died, without having any Markesh Dosh. Lakshmi gets discharged from the hospital. Her family comes to pick her. Rano creates a scene and asks Lakshmi to come with them. Lakshmi wants to see Rishi once. Rano tells that Rishi has no relation with them now.

Lakshmi still goes to meet Rishi, but Rano follows to stop her. Pandit reprimands Malishka for her weak belief. He isn’t answerable to Malishka. He tells that the people met with an accident at the bank, but whatever happened with Rishi was predicted, he had told Neelam that only Lakshmi can protect Rishi from danger, whenever Rishi gets attacked by the Markesh Dosh, Lakshmi will become his shield and she will also fall in danger. He reminds that Lakshmi always suffered while attempting to save Rishi’s life. He proves that he had told the truth to Neelam. Rano swears to initiate a fight with Oberois. Malishka yells at the pandit for making stories.

Pandit doesn’t think Malishka can understand such sensitive matters. Neelam asks Malishka to not cross her limits. She tells that Pandit’s insult will be their insult. Kiran argues with Neelam and defends Rishi and Malishka’s strong love for each other. Neelam tells that she knows that Rishi and Malishka love each other. Lakshmi arrives there and cries hearing their talks. Neelam tells that she wants Lakshmi back in Rishi’s life, even Lakshmi loves Rishi and saved his life many times by risking her life.

She finds Pandit right, Lakshmi was hurt every time she saved Rishi. She tells that Lakshmi doesn’t know about her Kundali, she has the power to save Rishi’s life, she can save Rishi from Markesh Dosh. She admits that she just got Rishi and Lakshmi married because of her strong Kundali, just to protect Rishi’s life. Lakshmi is shaken up by this truth. Neelam tells that Rishi’s love isn’t important than his life. She scolds Malishka for spoiling everything when she knew that the marriage was just meant for a year.

Reviewed Rating for Bhagya Lakshmi 25th February 2022 Written Update Truth for Lakshmi: 5/5 This rating is solely based on the opinion of the writer. You may post your own take on the show in the comment section below.