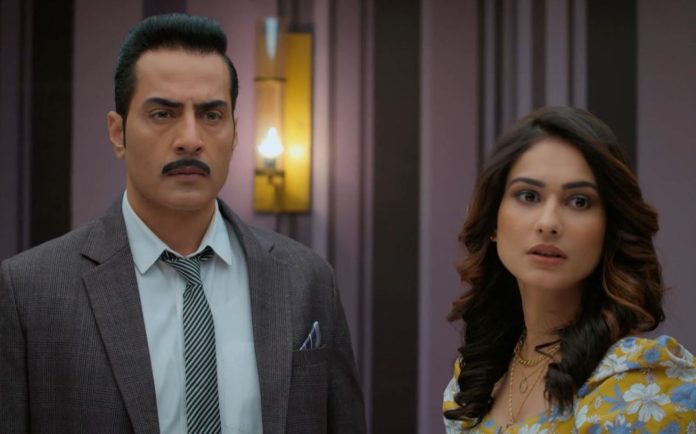 Anupama 25th February 2022 Written Update Malvika returns Anuj enters the dance academy with Anupama. He sings “Mujhse Shaadi Karogi”. Samar sees them coming and tells them that website design is almost ready. Anuj asks Samar how he did so fast. Samar says he completed the work sitting the whole night with the web designer. Anupama keeps staring at Samar with pride. Anuj praises Samar’s efforts. Anupama kisses Samar’s forehead. Samar says they have to launch this website anyhow before Anupama’s birthday. He says Varun will also help them as work is a little too much.

Anuj says it’s amazing and good news. Samar asks Anuj about the result of Anupama’s dance video. Anuj says the results will come in a day or two. Samar tells Anupama that he is sure that everything will change in her life after her this year’s birthday. Samar leaves saying that he is going to meet the content writer to get some changes done in the website. Anuj tells Anupama that Samar won’t stay sad till many days. Anupama says she knows it but feels sad as Samar has grown up before time, just in a day suddenly. Anupama says a person feels scared to walk on the same path again where he/ she already stumbled earlier.

Anuj’s veggie ring falls from Anupama’s hand. Anupama picks it up before Anuj. In a poetic way, Anuj asks Anupama to give his marriage proposal’s reply before he gets old. Both of them start laughing. Continuing his poetry/shayari, he asks Anupama to reply to his marriage proposal on her birthday. At Shah house, Kavya and Paritosh walk behind Vanraj. Vanraj walks saying that no one is ready to deal with him in Anuj’s absence. He says everyone is saying that the business runs on trust. Vanraj says everyone should trust him. He further says Anuj’s existence was a problem and his absence became a bigger problem.

Paritosh asks Vanraj to calm down. He tells Vanraj that it will take a little time to prove themselves to others. Paritosh also tells Vanraj that soon they will prove to others that they can run Anuj’s business better than Anuj. Vanarj and Paritosh say they will win. Bapuji and Samar enter with a lot of things. Baa asks them why they brought so many things. Samar tells everyone that Bapuji is sponsoring a party on the 18th. Vanraj asks what occasion is on the 18th. Samar tells Vanraj that it’s something that he never remembers, Anupama’s Birthday. This shocks and irritates Kavya, Vanraj, Paritosh and Baa. Vanraj recalls celebrating Kavya’s happiness on Anupama’s last birthday.

Bapuji says Anupama’s birthday never got celebrated in this house ever. He says he will celebrate Anupama’s birthday this year in a grand way. Kinjal gets happy hearing it. Baa asks Bapuji if he wanted that money for the party. Pakhi gets happy. Vanraj asks if Anuj and Anupama will party at their home. Bapuji says the people who want to come with happiness are invited. Vanraj tells Bapuji that he did the right thing as now Anuj doesn’t have the capacity to organize a party at a hotel. Bapuji tells Vanraj that a king would be king in the capital as well as during the exile. His words prick Vanraj.

Bapuji receives a message from Anupama asking him if he can meet her outside. He leaves asking Kinjal, Samar and Pakhi to take care of everything at home as he is going to bring some more things for Anupama. On the other hand, GK makes Anuj eat something. He gets happy when Anuj tells him that he finally proposed to Anupama for marriage. Anuj tells GK that he sung a song for Anupama and enjoyed teasing her. GK calls Anuj Lionhearted and recites a poem. He asks Anuj if Anupama said yes to his marriage proposal. Anuj replies to GK that Anupama will need a little more time to agree for marriage as she took a long to express her feelings too.

GK understands that it’s not easy for Anupama. Anuj tells GK that he doesn’t want to force Anupama and is enjoying this waiting time thoroughly. GK says no one can enjoy waiting. Anuj agrees with GK’s words. He says let’s see what will be Anupama’s reply on her birthday. On the other hand, Bapuji asks Anupama to say yes without giving it a thought. Anupama tells Bapuji that she is feeling scared. Bapuji tells Anupama that there is a big difference between Anuj and Vanraj. Anupama says she is the same person. She says she feels scared with the name of marriage after getting badly cheated in her first marriage.

Anupama tells Bapuji that her life after Anuj’s entry became like a fairy tale. Bapuji asks Anupama what she is scared about. Anupama replies that she fears that this story might come to an end. She says she has complete trust in Anuj but not in herself. Anupama tells Bapuji that fear as well as anxiety of her first relationship is still inside her. She says she fears if her fear and anxiety enters her relationship with Anuj too. Anupama asks Bapuji to think that if this happens it would be wrong with Anuj. She says she is scared of herself, not Anuj. Anupama says wounds given by Vanraj will always remain. She tells Bapuji that he was in her support because of which she didn’t get shattered and didn’t have to take any therapy or pills.

Anupama says Anuj is such a nice person that he would even bring the sky under her feet. She asks Bapuji what she would be able to give Anuj in return. Anupama says she still has marks of her past on her heart. She says if her past would affect her relationship with Anu, then she will become a mere burden for Anuj. Anupama says she will always fear if some other Kavya would enter Anuj’s life. She says she fears marriage thinking that she might wreck her second relationship/marriage herself. Anupama says it will be a first marriage for Anuj and his post marriage life should be perfect. She asks Bapuji what if she fails to give perfect after marriage life to Anuj.

On another side, Anuj wonders when his family will get complete with him, GK, Malvika and Anupama. He also wonders when everything will get normal. GK tells Anuj that everything will get better soon. Anuj asks GK if his dreams would get fulfilled on Anupama’s birthday. GK asks Anuj to pray for happiness and he will pray with him. Anupama asks Bapuji what she should do. Bapuji thinks a little and tells Anupama that she is correct. He explains to Anupama that there are two ways of living life either with suspicion or trust. Bapuji asks Anupama to have faith/trust in God. He asks Anupama to remember that the match can be won even after losing the toss.

On the other hand, Anuj wonders when will his wait end. Both Anuj and Anupama get a lot of messages on their phone. These messages shock both Anuj and Anupama. At the office, Vanraj thinks he gave Anupama an advance birthday gift. Both Anuj and Anupama meet to discuss how this wrong news got published everywhere. Anupama says to Anuj that the news is wrong as he didn’t get fired but instead left the company on his own accord. She says not Malvika, but Vanraj can do this. Anupama tells Anuj that Malvika will teach Vanraj a good lesson after reading this news.

At the office, Malvika asks Vanraj who got this false news published. Vanraj pretends innocence. Malvika asks Vanraj if he is saying that he didn’t get this false news published. Vanraj says he thinks Anuj and Anupama intentionally got this published to gain people’s sympathy and to prove her a horrid and thankless sister. He tells Malvika that Anuj and Anupama want to snatch their clients by playing the victim card. Anupama comes there clapping her hands in anger. Vanraj asks Anupama how she came inside. Anupama says she came by the front door as she isn’t used to taking the back door like him.

In the next episode, an angry Anupama will call Vanraj just by his name. She will ask Vanraj if her and Anuj’s happiness and non-acceptance of defeat is eating him up from inside. She will ask Vanraj to be thankful that she didn’t become a ‘lowlife’ like him. Vanraj will call security and ask them to throw Anupama out. Anupama will tell Vanraj that no one will be able to lay a finger on Anuj’s Anupama, because this is her Anuj’s hard work and real wealth. She will leave Kapadia office warning Vanraj.

Reviewed Rating for Anupama 25th February 2022 Written Update Malvika returns: 5/5 This rating is solely based on the opinion of the writer. You may post your own take on the show in the comment section below.