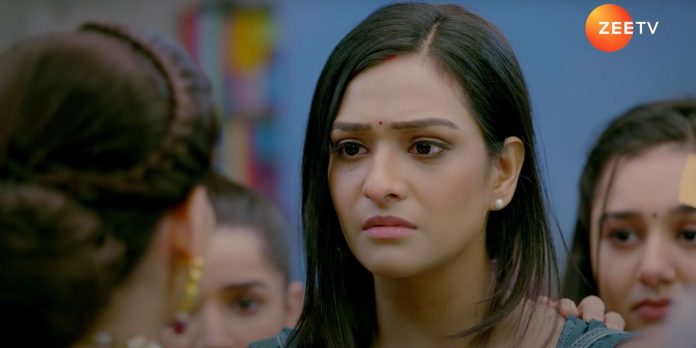 Bhagya Lakshmi 28th February 2022 Written Update Neelam shocks Lakshmi Doctor tells Oberois that the next 24 hours are very critical for Rishi. He asks them to pray for Rishi’s recovery, because their prayers can make a miracle happen. Neelam cries for Rishi. Lakshmi overhears the truth and is deeply shaken down. Neelam goes to meet Rishi and cries seeing him. She asks Pandit what should she do to save Rishi. He asks her to bring Lakshmi close to Rishi, when Lakshmi comes back, then Rishi can also come back. Pandit ji guides her to bring Lakshmi back at any cost.

She tells that they have to get the strength of Lakshmi’s Kundali if they have to save Rishi from death. Neelam tells that she will bring back Lakshmi in Rishi’s life, just Lakshmi can save Rishi from Markesh Dosh. Neelam tells Malishka that she will bring Lakshmi back and that’s final now. Malishka sheds tears. She goes to meet Lakshmi at her house. She makes a mistake by showing her practical side.

She offers money to Lakshmi and asks her to come with her to save Rishi, taking this new relation between them as a deal. Lakshmi has learnt the entire truth of Rishi and her marriage. She realizes how selfish are the Oberois that they got her in Rishi’s life just to protect the latter. She is hugely disappointed by Neelam. She realizes that Rishi is innocent and had to marry her unwillingly on Neelam’s command. Neelam knows that Lakshmi will never accept the money, as she rejected the money when Rishi offered her before. She offers the money to Rano and family, knowing Rano will pressurize Lakshmi and send her with them for the sake of money. Neelam asks Lakshmi to just come with her. Lakshmi finds hard to digest the harsh truth and go with Neelam. Will Lakshmi agree to save Rishi? Keep reading.

Neelam accuses Malishka for compelling Rishi to leave Lakshmi. She tells that Rishi is in this state because of Malishka. She asks her to think what could have happened to Rishi if Lakshmi wasn’t there at the bank, he would have died then. She adds that Lakshmi was around Rishi and saved him in time. Lakshmi is shocked to know the marriage truth. Neelam tells Malishka that she wants Rishi to get Lakshmi back in her life, Lakshmi is his life protector and should become his life partner also. She adds that she will bring Lakshmi back for Rishi’s life, she wants Rishi safe and sound.

She is shocked to see Lakshmi there, overhearing their conversation. She didn’t expect Lakshmi to be there. Rano and her husband get into an argument about Lakshmi. She bites his hand just to go to Lakshmi and take her home. She doesn’t want Lakshmi to ruin her family pride. He finds Lakshmi shattered and wants to know the reason. They follow Lakshmi, who walks lost. Doctor tells the family that he has done his best and now just God can help him. He asks the family to pray for Rishi. Neelam asks Pandit to come with her and revive Rishi. She wants Rishi to get conscious.

Nurse asks Neelam to go out of the ward. Neelam asks her to let her try once to save Rishi. Pandit applies the tika to Rishi and prays for him. Neelam feels helpless. She wants to save Rishi. She asks Rishi to come back to her. She cries for him. She asks him to open his eyes and not let his mum cry. She tells that he didn’t listen to her when she asked him to not go to the bank. She asks him to open his eyes once. Pandit tells that he will perform more yagya for Rishi, Rishi is still in danger because Lakshmi is away. She asks him to save her son. He asks her to bring Lakshmi close to Rishi, then his death will get away. He tells that they want Lakshmi’s strong stars to help Rishi fight his death.

He advises her and makes a leave. Lakshmi returns home with her sisters. Rano tells Neha that Lakshmi has turned deaf. Pritam argues with her. He loves Lakshmi as his daughter. He asks Rano not to trouble Lakshmi. Lakshmi takes some time thinking of the marriage truth. She recalls Neelam’s words. Shalu and Bani ask her the matter. They get worried for her. Virender learns that Lakshmi left from the hospital. He stays stressed. Ayush tells that Lakshmi is a fighter, she recovered and left for home. He asks Virender not to worry. Virender prays for Lakshmi.

Ayush talks to Shalu and enquires about Lakshmi. She tells that Lakshmi is okay. He tells that Rishi is critical. He finds Virender disturbed and runs to him. Shalu asks Lakshmi not to worry for Rishi, he will get fine soon. Ayush pacifies Virender. Lakshmi recalls Rishi’s words. She tells that Rishi didn’t lie to her, she was the one who misunderstood him. She cries for him, knowing the dangerous threat on his life. She ponders their moments and his reactions whenever they had come close. She realizes that he wasn’t wrong completely. Neelam wants to bring Lakshmi back at any cost. Virender prays for Rishi’s long life. He confesses that he loves Rishi a lot, but Neelam loves him more.

He remembers the moments with Rishi. He feels sorry for hurting Rishi. Neelam tells Malishka that she is going to bring Lakshmi back. Malishka asks Neelam not to get afraid for Rishi, he will be fine soon. She tells that she will talk to Neelam and bring him to senses. Neelam tells Karishma that Rishi would have fallen in danger anywhere at that time of threat, because Lakshmi wasn’t with him, his Kaal is around and he needs Lakshmi with him to survive. Malishka asks Rishi to open his eyes once and tell Neelam that he loves her. Doctor tells that he will check Rishi. Neelam asks how many time they have to save Rishi. He tells that she just has nine hours.

He sends Malishka out of the ward. Neelam realizes that Malishka couldn’t awaken Rishi. Doctor tells them that there is no improvement, he is more critical than before. Neelam just wants to think of Rishi. She tells that she will go to Lakshmi and beg her to save Rishi’s life. Malishka pleads to not do this. Kiran asks Neelam why is she insulting them. She tells that Rishi loves Malishka, Neelam can’t bring Lakshmi back and neglect Malishka. She tells that if Neelam brings Lakshmi home, then Rishi can never come back in Malishka’s life.

Reviewed Rating for Bhagya Lakshmi 28th February 2022 Written Update Neelam shocks Lakshmi: 5/5 This rating is solely based on the opinion of the writer. You may post your own take on the show in the comment section below.