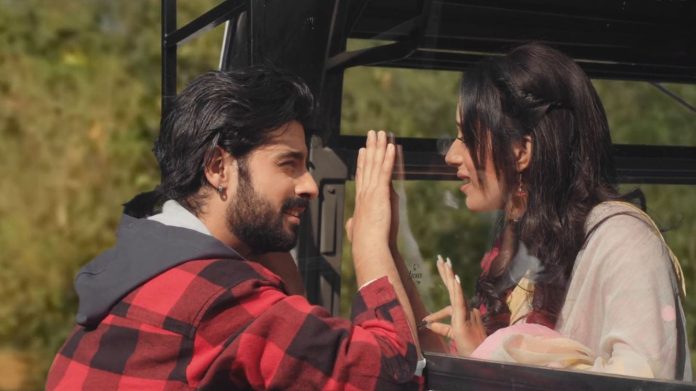 Yeh Hai Chahatein 26th February 2022 Written Update Rudra brave act Bunty will shout and ask Bunty to sit with Ruhi at the back. Prisha requests Bunty to not do anything bad. Bunty refuses to listen to anything and keeps driving the bus at high speed. Rudra reaches behind the bus and Bunty notices him following the bus. Bunty increases the bus’s speed and drives, roughly hurting the innocent kids inside. Rudra calls the inspector. Inspector tells Rudra that they are behind him. Rudra tells the inspector that they will capture the bus from both sides and will see how to stop the bus.

Inspector do as Rudra says. With teacher and peon’s help, Prisha gathers the kids at one place. She asks the kids to pray to God as God listens to the kid’s prayers quickly. She also prays to God to save kids’ lives. Prisha wonders where Rudra is. Rudra picks up Saaransh’s call. Saaransh asks Rudra about Ruhi and other kids. Rudra tells Saransh that everyone is fine till now. He says he is following the bus. Rudra also tells Saaransh about the bus’s brake failure. He asks Saaransh to ask everyone to pray for the people inside the bus. Saaransh asks Rudra about his current location and tells him that he wants to help him. Rudra tells Saaransh that he will get more tense if he too reaches here.

Media somehow overhears everything. They decide to follow Saaransh and make it a breaking news. Rudra reaches near Prisha’s seat. Prisha hears him. She tells Rudra that the bus driver is none other than Bunty. Prisha tells Rudra that Bunty disguised as the driver to kidnap Ruhi. She also tells Rudra that she told Bunty that they have got Bubbles admitted for treatment. Prisha says that Bunty is not ready to believe her words and has gone mad in revenge. Rudra asks Prisha to take care of the kids, herself and Ruhi. Prisha prays to God that Bunty gets convinced by Rudra’s words and stops his madness. She also prays for Rudra’s safety.

Saaransh also leaves to follow Rudra. Media follows Saaransh to get breaking news. Rudra reaches near the driving seat. Prisha and Rudra request Bunty to hear them once. Bunty opens the front door while driving. Rudra asks Bunth why he is doing all this. He tells Bunty that Prisha is telling the truth that Bubbles is in hospital and ehr treatment is going to start. Rudra requests Bunty to admit his mistake and stop the bus. Bunty refuses to believe Rudra and Prisha. Rudra assures Bunty that he will fix everything and not let anything happen to him. Bunty doesn’t agree with Rudra. He recalls the doctor telling him that Bubbles need a kidney transplant done as soon as possible. He also recalls Bubbles requesting Rudra and Prisha to forgive Bunty.

Bunty gets angrier recalling Rudra taking Bubbles somewhere and not respecting her pleas. He sees police and thinks Rudra deceived him once again. Bunty speeds up and hits Rudra’s car badly. Saaransh also reaches the same location. Everyone gets worried for Rudra. Rudra’s car blasts, shocking and scaring everyone. Bunty feels apologetic towards Rudra. He says he did all this because Rudra took his Bubbles away from him. Bunty says this is his revenge. Prisha and Ruhi cries for Rudra. Ruhi wishes that Rudra comes back. Suddenly, Rudra is seen hanging behind the bus. Flashback shows Rudra jumping out of his car towards/on the bus.

Flashback ends, Prisha relaxes seeing Rudra alive. Rudra tries getting inside the bus. Bunty hears Ruhi taking Rudra’s name. He gets alert that Rudra is coming towards him. Bunty makes the bus hit the pole to make Rudra fall. Rudra understands this in advance and jumps. He gets badly hurt. Prisha gets angry at Bunty and tells him that he will regret his actions soon on knowing the truth. Bunty tells Prisha that he is taking the bus towards the cliff. He also tells Prisha that everyone will bear the punishment of her and Rudra’s mistake. Police and Saaransh reach Rudra and try to wake him up. Saaransh gets worried for Rudra.

Rudra wakes up. He tells the inspector that Bunty is in the driver’s seat. Saaransh asks Rudra why Bunty is doing all this. Rudra tells Saaransh that he would explain everything to him later on as they need to save the kids first. He asks the inspector where the bus is going. Inspector tells Rudra that the bus is going towards the cliff. This makes everyone shocked as they decrypt that Bunty is going to make the bus fall from the cliff. Rudra makes a plan to save everyone. In the bus, Prisha requests Bunty to get his revenge on her and Rudra and let other students, Ruhi and teachers go.

Bunty doesn’t pay heed to Prisha’s requests. Prisha tells Bunty that he has become a devil. Bunty tells Prisha that a person becomes a devil seeing their loved ones suffering badly and dying. He asks Prisha what would have happened if she and Rudra would have forgiven him and not made police follow him. Bunty asks Prisha if she and Rudra thought what would happen to Bubbles if he would go to prison. He says he doesn’t care about anyone anymore as nobody thought of him and Bubbles. Bunty tells Prisha that she and Rudra have made him a devil. He shouts and asks Prisha to not try convincing him and sit with kids.

Prisha worries for everyone and wishes that Rudra saves everyone. Media captures Rudra’s blasted car. This shocks Sharda and she drops the water glass on the floor. Vaijayanti comes and asks Sharda what happened. Both Vaijayanti and Sharda get shocked after seeing and hearing the news. Vaijayanti tries to calm Sharda. She tries calling Rudra but it comes unreachable. This worries Sharda and Vaijayanti more.

Later, at Srinivasan’s house, they also watch the same news. Vasudha shows no signs of care but GPS gets worried for Rudra and Ruhi. Vasudha asks GPS to not react to all this as Prisha killed Venky because of Rudra only. She shows no care towards Ruhi too. GPS gets upset seeing Vasudha lost in Venky’s death sadness and not caring about Ruhi and Rudra. He prays to God for everyone’s safety.

In the next episode, Rudra will reach near the bus with police. He will make Prisha open the emergency exit. Prisha will pass the kids to Rudra to save them. Ruhi will fall down badly while Prisha will try to pass her to Rudra. Both Rudra and Prisha will get worried seeing Ruhi badly injured. Ruhi will bleed and faint. Reviewed Rating for Yeh Hai Chahatein 26th February 2022 Written Update Rudra brave act: 5/5 This rating is solely based on the opinion of the writer. You may post your own take on the show in the comment section below.