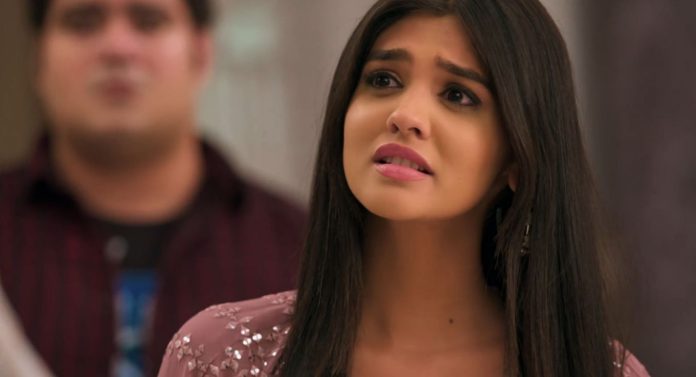 Akshara finds it difficult to believe Abhimanyu and Manish’s words. She feels something is going on between Abhimanyu and Manish. Harshavardhan says it’s difficult to believe that Manish came to apologize to Abhimanyu. Akshara asks Manish why she feels that he is lying. Abhimanyu asks Akahara to not give stress to Manish. Abhimanyu gives permission to Manish to stay at home instead of at the hospital. He says Aarohi can monitor Manish and he will also be available at the time of need. Akshara and Kairav take Manish home. Harshavardhan still feels that Manish and Abhimanyu are still hiding something.

On Kairav and Akshara’s questions, Abhimanyu tells Akshara that he will explain to Aarohi how to take care of Manish at home. He also says that he will too come to Goenka house, if he will be needed. Akshara feels that Manish and Abhimanyu are hiding something big. Abhimanyu thinks about how he will ask Manjiri to leave her husband’s house for her son. Harshavardhan questions Abhimanyu about what he and Manish are hiding. Abhimanyu rudely refuses to tell anything to anyone. At Goenka Mansion, everyone scolds Manish for leaving the hospital without any information. Manish says he just went to apologize to Abhimanyu as he was anxious and guilty.

Manish says he also went to thank Abhimanyu for saving his life. Anish and Kairav tell each other what is happening at their houses through texts. Akshara keeps Manish’s hand on her head and asks him to tell her the truth. She asks him to tell her for what reason he went to meet Abhimanyu. Manish takes his hand off Akshara’s head and remains silent. Akshara says she will ask Abhimanyu, if he won’t tell her. Manish tells Akshara that she won’t question Abhimanyu. Aarohi asks Akshara to not stress Manish more. At Birla house, Manjiri will ask Abhimanyu what is troubling her. She will ask Abhimanyu if Manish kept any condition in front of him.

Manjiri feels angry and emotional with Manish’s condition for Akshara and Abhimanyu’s marriage. She stands up and leaves Abhimanyu’s side. Abhimanyu feels for asking such a question from Manjiri. Manish texts Abhimanyu and asks him about Manjiri’s decision. He tells Abhimanyu that he doesn’t want to force him but needs his answer soon as Akshara is questioning him a lot. Abhimanyu feels angry and thinks about what reply he should give to Manish. Later, Abhimanyu receives Akshara’s video call. She tells him about today’s weather and things going on in her neighborhood. Then she comes to the point and requests Abhimanyu to tell her what Manish and he talked about as everyone is tense.

Manjiri cries and thinks that she can’t leave her family behind. At the hospital, Abhimanyu receives Akshara’s call. He thinks about why Akshara is calling him so early in the morning. Akshara cries and asks Abhimanyu to come home as soon as possible as something happened to Manish. Abhimanyu thinks Manish would have taken his, Akshara, Kairav and Anisha’s stress for sure. He immediately leaves for Akshara’s house. At Birla house, Manjiri recalls Harshvardhan’s words and Abhimanyu’s question. Mahima, Anand and Harshvardhan are seen walking towards the dining table, discussing some medicines and pharmaceutical companies. Being lost in thoughts, Manjiri mistakenly makes the tea fall on the floor.

Harshavardhan tells Anand that Manjiri’s present condition is because of the discussion that happened between Manish and Abhimanyu yesterday. He thinks he needs to talk to Manjiri alone to get to know the truth. Abhimanyu reaches Goenka Mansion and runs inside immediately. He starts checking and examining Manish in front of Akshara. Abhimanyu tells Akshara that Manish seems normal. He asks Akshara what happened to her that made her panic. Akshara tells Abhimanyu that yesterday night Manish told her everything in sleep and subconsciousness. She asks Abhimanyu how he could hide such a big thing from her.

Akshara says she would tell the whole Goenka and Birla family. Abhimanyu asks Akshara to not do this. Akshara runs downstairs and calls all the family members. Abhimanyu follows her and tries to stop her from telling anyone. Akshara screams and tells everyone that she got to know what Abhimanyu and Manish were hiding from them. She tells Abhimanyu that he and Manish deceived everyone badly. Abhimanyu blurts out that he and Manish didn’t deceive anyone. He says Manish just kept a condition in front of him to leave his house, if he wants to marry her (Akshara). Abhimanyu says he talked to Manjiri about this thing, nothing else.

Abhimanyu gets shocked seeing Akshara shocked with his confession. All Goenkas also get shocked hearing this. Abhimanyu asks Akshara if she didn’t know anything. Akshara says she got to know everything now. Abhimanyu asks Akshara how she can play with her and Manish. Akshara tells Abhimanyu that he and Manish played with everyone. She also tells Abhimanyu that he and Manish deceived their respective families. Suhasini says how can Manish do this. Aarohi thinks that she can’t believe that Manish agreed for Abhimanyu and Akshara’s marriage. Akshara says how can someone deceive their own family. Abhimanyu tries to calm Akshara but sees Manish coming towards them.

Akshara tells Manish that he and Abhimanyu shouldn’t have done this. Akshara says neither Abhimanyu told her anything nor Manish spoke the truth in unconsciousness. She says that she knew that Abhimanyu and Manish were hiding something big. Akshara says she made Abhimanyu blurt out the truth by lying to him. She asks Manish and Abhimanyu where their overconfidence went now. Akshara asks Abhimanyu and Manish how they can do this. She asks Manish, before keeping this condition, didn’t he think for once, what if Harshavardhan had kept the same condition in front of Kairav? Akshara asks Manish if he would have permitted Kairav to leave the house.

In the next episode, Akshara will ask Abhimanyu if he would be able to choose one person between her and Manjiri, if she will ever ask him to in future. She will tell everyone that earlier too she sacrificed her love for her family’s happiness. Akshara will say that she didn’t fall in love to break the family. She will say that she doesn’t want this kind of love. Abhimanyu will feel very guilty for making Akshara go through all this. Akshara will run upstairs and cry profusely.

Reviewed Rating for Yeh Rishta 1st March 2022 Written Update Akshara loses faith: 4/5 This rating is solely based on the opinion of the writer. You may post your own take on the show in the comment section below.