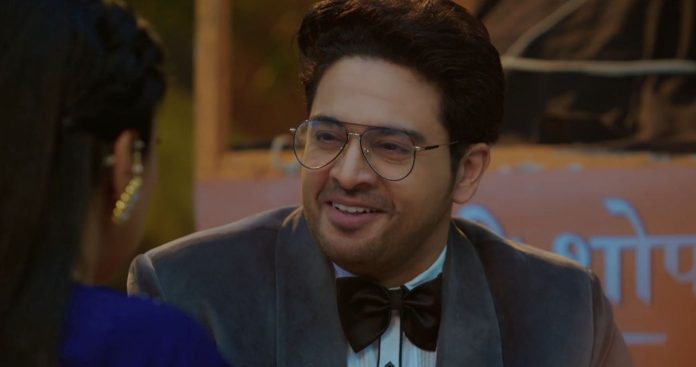 Anupama 2nd March 2022 Written Update Anuj surprised Anupama is seen crying profusely and feeling apologetic towards Anuj. Anuj comes and sits with Anupama. He wipes Anupama’s tears and the latter apologizes to him. She tries to justify herself but fails in her sobs. Anuj asks her to get quiet and speaks a shayari for Anupama. Through his Shayari/poetry, Anuj tells Anupama that he understood her reason behind not replying to his marriage proposal in front of everyone. At Shah house, GK asks Bapuji why didn’t Anupama confessed her love to Anuj and replied to his marriage proposal in front of everyone.

Bapuji tells GK that not only Anuj but he, GK and especially Anupama waited for the moment when Anupama will say yes to Anuj’s marriage proposal. Vanraj insists Kinjal to have fruits. She starts having fruits on Vanraj’s insistence. Vanraj tells Kinjal now everything will go according to him in the house as he is going to become a grandfather. Bapuji and GK witnesses this moment and says Kinjal’s pregnancy is the reason why Anupama didn’t reply to Anuj’s marriage proposal in front of everyone, as she planned. Bapuji tells GK that in our culture we have seen Grandmother and Grandfather narrating stories, going on a pilgrimage and making cows eat chapatis, not falling in love, marrying someone and living for themselves.

GK and Bapuji discuss how our culture doesn’t accept a woman or aged person living according to their own rules. They discuss that Anupama stopped herself from accepting Anuj’s marriage proposal because of society’s thinking. On the other hand, crying Anupama tells Anuj that she just gives him reason to cry. Anupama also tells Anuj that she forgot everything for a moment on knowing about Kinjal’s pregnancy. She apologizes to Anuj for forgetting him. Anupama says being a grandmother is a big happiness. She tells Anuj that she found it very difficult to tell anyone that she wants to become his wife after telling everyone that she is going to become a grandmother.

Anuj shows an understanding gesture to Anupama. Anupama tells Anuj that she knows she also has the right to be happy but she failed to accept his marriage proposal in front of everyone. She also tells Anuj that people of her age want to live for themselves too but since childhood they are taught to live for others and their family. Anupama once again apologizes to Anuj. Emotional Anuj, tells Anupama that he couldn’t understand her happiness and dilemma. He tells Anupama that he wants to understand her happiness and dilemma but he doesn’t know what it feels to become a parent, grandparent and husband. Anuj says he doesn’t even know how it feels to become a groom.

He tells Anupama that he understood her happiness of becoming a grandmother because of which she couldn’t pour her out in front of everyone. Anupama tells Anuj that she failed to say that she wants to marry him. Anupama’s words shocks as well as surprises Anuj. He breathes a sigh of relief hearing this. Anuj laughs happily and feels happy. Anupama laughs happily seeing Anuj happy with her reply to his marriage proposal. Anuj screams and tells Anupama that he loves her. He cries and again says, “I love you” to Anupama. Anupama tells Anuj that she also wanted to scream out her confession to him in front of everyone but failed and confessed to him in private.

Anuj tells Anupama that he knew that she was going to confess her feelings to him and accept his marriage proposal in front of everyone. He also tells Anupama that he understood her feelings and plans on getting her vermilion box fallen. Flashback shows Anuj going to see tense Anupama and finding her vermilion box fallen on the floor. Flashback ends. Anuj and Anupama tell each other that they can’t wait to marry each other. They keep staring at each other for some time. Anupama tells Anuj that Bapuji, Lord Krishna, Goddess Radha, and her children are supporting her in her decision to marry him. Anuj asks Anupama to give him a reply to his marriage proposal. Anupama tells Anuj that it’s a yes from her.

She also tells Anuj that she wants to make him Mr. Anuj Anupama Joshi. Anuj gets extremely happy hearing this. He asks Anupama to think about her decision once again as he won’t leave her hand after holding it. Anupama tells Anuj that she won’t back out from her decision even if she dies or would have to go against the world. She also tells Anuj that now she wants to live the rest of her life as Anuj’s Anupama. This makes Anuj very happy. Both Anupama and Anuj keep holding their hands together. Anuj tells Anupama that he wants to fill vermilion in her hairline. Anupama asks Anuj to fill vermilion in her hairline in front of everyone.

In the next episode, Samar will surprise Anupama with a thali of 45 dishes for her 45th birthday.

Shahs will walk outside hearing band-baaja sound. They will see Rakhi dancing with Band Baaja from inside her car. Everyone will get shocked as well as surprised seeing Rakhi after a long time.

Reviewed Rating for Anupama 2nd March 2022 Written Update Anuj surprised: 4/5 This rating is solely based on the opinion of the writer. You may post your own take on the show in the comment section below.