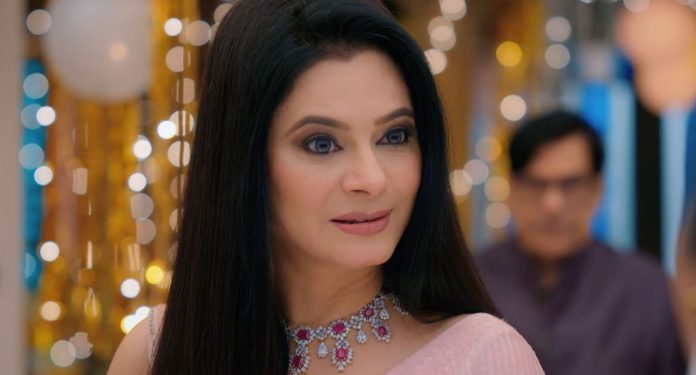 Anupama 4th March 2022 Written Update Rakhi’s condition Rakhi Dave comes dancing. Vanraj sees Rakhi and recalls her last words to him. Baa says pregnancy news shouldn’t be told to outsiders but Rakhi came with Band-Baaja people. Anupama tells Baa that it’s fine if Rakhi wants to share her happiness with everyone. Baa says that they have the first right on Kinjal’s pregnancy happiness. She says Rakhi can share her other things with people. Anupama politely asks Baa to be a little quiet. Kavya praises Rakhi’s entry. Bapuji explains to Baa that anyway Rakhi is related to them through Kinjal.

Anupama and Rakhi see each other and recall their last time fights and arguments. Vanraj and Rakhi recall their last fights too. Rakhi says hi to everyone by addressing everyone according to relations with her. She tells Shahs that their family tree is getting complicated day by day. Rakhi says that she got to know everything through her sources. Rakhi looks towards Kinjal with hope and teary eyes. Anupama asks Kinjal to go and meet her mother. Kinjal hugs Rakhi tightly. Rakhi caresses Kinjal and kisses her forehead. Anupama also makes Paritosh meet Rakhi. Paritosh takes Rakhi’s blessings by touching her feet.

Rakhi blesses Kinjal and Paritosh and hugs them. Anupama thinks that her mother never lived this happiness as Baa never called her at the time of pregnancy. She also thinks that Kinjal’s child would get both maternal and paternal grandmother’s love. She further thinks that Kinjal would never get stuck between her maayka and sasural like her. Rakhi and Anupama call each other Nani and Dadi. Kavya gets shocked when Rakhi wards off evil eye from Kinjal and Paritosh using a big bundle of cash. Rakhi dances with Anupama and Shahs in Kinjal’s pregnancy happiness.

Anupama notices Vanraj’s anger. She asks Vanraj to leave his anger for Paritosh and Kinjal. Vanraj refuses to do so. He agrees, when Anupama asks him to leave his anger for his upcoming granddaughter or grandson. Rakhi asks Kinjal to come with her as she has come to take her. This shocks everyone. Rakhi says that her grandson will take birth in a mansion not in the lower middle class neighborhood of Shahs. Rakhi stops Anupama from lecturing her. She asks Anupama if anyone from Vanraj, Paritosh, her and Baa ever changed after her lectures. Rakhi says no one changed and asks Anupama why she gives non-stop lectures for 20-20 minutes.

Anuj tells Rakhi that Anupama doesn’t leave her hope to fix people like her but people like her never leave their cheap behavior or insolence. Rakhi asks Anuj who he is, if she ever met him. Flashback shows Rakhi trying to be friends with Anuj for business benefits at Shah’s cafe but Anuj refuses to recognize or remember her. Anupama notices Vanraj smirking at Rakhi’s words and gets angry. Kinjal reminds Rakhi that she met Anuj at Shah’s cafe. Rakhi intentionally refuses to remember Anuj. Anuj tells Rakhi that it’s as everyone knows that tubelight takes time to switch on.

Rakhi angrily takes Anuj’s full name and asks him to not try to be oversmart. Anuj says finally the tube light switched on. Anupama smirks on Anuj’s perfect answer to Rakhi’s rude behavior. She looks at Vanraj with confidence and smirks, making him irritated. Bapuji politely asks Rakhi to come inside and talk. Rakhi passes through the whole family and enters Shah house recalling how Shahs behaved with her last time. She also recalls that she took the decision to return to take revenge from the Shahs. Anuj and GK take a leave from Anupama saying that they don’t have the right to be involved in Shah’s family matters. Anuj before leaving, asks Anupama to return home soon.

Anupama apologizes to Anuj and GK and agrees to their decision. On the way back home, Anuj tells GK that he is having some strange feelings. Meenu says she is going to a room with her headphones on. Dolly asks Meenu why. Meenu says whenever Rakhi comes she creates a huge drama which causes her a headache. She asks Dolly to call her when Rakhi will leave. Rakhi asks Shahs if they got poorer after her exit from their house. Baa asks Rakhi to come to the point. Rakhi tells Baa that she is talking practical. She says Kinjal is pregnant and needs rest, luxuries and best medical care. Baa tells Rakhi that Shah house also has all the facilities.

Rakhi asks Kavya if she agrees to Baa’s words. Kavya says not really, as Shah’s house doesn’t have AC, her bathroom geyser isn’t working, the microwave is very old and Shahs doesn’t even have a gas pipeline. She says still cylinders arrive at Shah’s house. Kavya’s complaints irritate Kinjal and Anupama. Vanraj asks Kavya to stop. Rakhi asks Vanraj why he is scolding Kavya as she is just telling the truth. Anupama aska Rakhi to ask the same question to Kinjal. Kinjal tells Rakhi that she is very happy at Shah house. Rakhi tells Kinjal that staying in dirt for a long time may feel comfortable but she won’t let her stay in dirt. She also tells Kinjal that 9 people stay at Shah house and even Anupama, Anuj and GK keep visiting Shah house.

Rakhi further tells Kinjal that Shah house has 5 rooms but 12 people. She says to Kinjal that their servants live a better life than this. Rakhi also says to Kinjal that Shahs argue and fight a lot and electricity often goes off at Shahs house. She reminds Kinjal that she has a mother in law and father in law with affairs and their Infamy. Vanraj asks Rakhi to keep her words to herself. She says she doesn’t want Kinjal to do household chores like a servant or Anupama in her pregnancy too. Rakhi further says if Kinjal would stay at her house, she will get rest, best medical care, 24*7 personal staff, personal yoga teacher and most importantly peace.

Baa tells Rakhi that her staff can take proper pregnancy care of Kinjal. She also tells Rakhi that their house has noise because it has a family and is lively/alive. Baa asks Rakhi to live in himalayas if she wants to live in full peace. Rakhi tells Baa that if her family members would be given another separate place to live, they would immediately leave Shah house. Baa and Rakhi keep on fighting and arguing. Anupama tries to calm Rakhi and Baa. Rakhi and Baa refuse to listen to Anupama and argue again. Anupama tells Baa and Rakhi that she understands their love for their upcoming Granddaughter or grandson. She says that only Kinjal has the right to make decisions about her upcoming child.

Anupama asks Kinjal to make a decision after giving everything a thought. She tells Kinjal that no one will question her decision. Bapuji, Samar and Mamaji tell Kinjal that they will support her decision too. Mamaji’s joke makes Kinjal laugh. Vanraj asks Bapuji what about their reputation, if their daughter-in-law will live outside home during her pregnancy. Samar tells Vanraj that they don’t have any idea what a woman feels or goes through in her pregnancy, so they don’t have the right to give their opinion on this. Kinjal feels good and proud with Samar’s words. Anupama says Samar is right. She says everyone lectures pregnant women to do this or that. Anupama says everyone wants to make women work according to them.

She says everyone should understand that it should be the pregnant woman’s/woman’s decision, what she wants to do with her life. Kinjal thanks Anupama for giving her this choice. She tells Anupama that being traditional too, she is the most progressive mother of this world. Kinjal thanks Anupama for being her mother. Shocked, Rakhi asks Kinjal if Anupama is mother, is she a postman. Kinjal holds Rakhi’s hands and tells her that she is also her mother. She tells Rakhi that her sources gave her pregnancy news to her before she could. Kinjal explains to Rakhi that she would keep meeting her and spend weekends with her. Baa gets happy when Kinjal tells Rakhu that she won’t be able to leave her in-laws.

In the next episode, Rakhi will tell Kinjal that she could have gotten her mother’s love and care if Anupama would have been living in the Shah house. She will tell Anupama that she will remain calm if Kinjal will remain happy. Rakhi will also say that if Kinjal will get unhappy, she will get unhappy and will not let anyone in Shah house live peacefully. Later, Baa will think that Kinjal won’t suffer any problem, if Anupama lives in Shah house. Everyone will get worried.

Reviewed Rating for Anupama 4th March 2022 Written Update Rakhi’s condition: 5/5 This rating is solely based on the opinion of the writer. You may post your own take on the show in the comment section below.