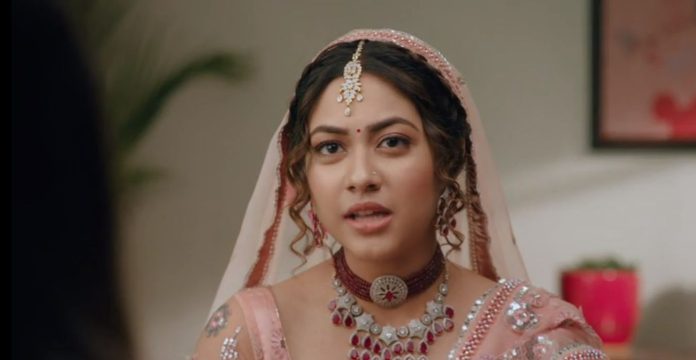 Fanaa 3rd March 2022 Written Update Pakhi to marry Agastya Six Days later, a woman pushes Pakhi out of her house. This woman seems to be Pakhi’s old client. She refuses to give Pakhi her payment of 1 lakh rupees that was pending. The woman asks Pakhi what she will do with the money inside the prison. Pakhi tells the woman that she is making a mistake by believing fake news. She also tells the woman that people like her should get arrested instead of her who doesn’t give their payments on time.

Prema once again tries to convince Pakhi to marry Agastya. She tells Pakhi that she isn’t saying all this because of people or family’s benefit but for her goodwill only. Pakhi still remains reluctant and says that she will soon make people believe that she is not a murderer. She says that she will get good event offers after that. Pakhi’s aunt taunts her telling her that she didn’t get any event even after trying hard for the last six days. Seeing Pakhi reluctant, Prema says she will call Neelima and tell her that Pakhi’s final decision is that she doesn’t want to marry Agastya. She cries and worries for her both children/daughters.

Prema keeps crying and says that she can’t fulfill Sameer’s last wish, thinking that Sameer wanted Pakhi to marry Agastya. She worries thinking that Pakhi’s aunt will throw Pakhi out of the house after her death. Prema thinks how will Pakhi and Shanya manage their life if she dies. Pakhi feels guilty and cries seeing her crying profusely and suffering badly. She reaches Agastya’s house. Agastya asks Pakhi why she hasn’t been replying to his calls and messages since the last few days. He tells Pakhi that he was worried for her. Pakhi tells Agastya that she can’t ruin his life by marrying him. She also tells Agastya that he deserves a better girl than her. Pakhi further tells Agastya that he is such a perfect person that any girl dreams of marrying.

Agastya makes Pakhi sit aside. He reminds Pakhi of old times when he brought mango ice-cream for her which wasn’t available. He sees Pakhi still feeling reluctant. Agastya tells Pakhi that he will be very grateful if she becomes his wife. He tells Pakhi that it’s time that they take their friendship to another level and become each other’s husband and wife. Pakhi tells Agastya that she isn’t ready for marriage and it’s responsibilities. She also tells Agastya that she won’t be able to smile ever and give him a wife’s love. Agastya tries his best to make Pakhi agree to marry him. He tells Pakhi that he would wait for her till she agrees to marry him. Pakhi returns to her home and asks Prema to call Neelima. She asks Prema to tell Neelima that she is ready to marry Agastya.

Pakhi hugs her mother. Prema feels Pakhi isn’t happy. She asks Pakhi if she is taking this decision under any pressure. Pakhi doesn’t reply. Shanaya feels bad for Pakhi. Pakhi goes to her room. She sits near the stairs and cries. Pakhi recalls her beautiful and romantic memories with Ishaan. She cries and says that her love for Ishaan didn’t end in her heart till now, even after whatever Ishaan did to her. Pakhi says she is now ending Ishaan’s chapter in her life forever. She also says that she won’t ever meet Ishaan or see his face. Pakhi wishes that Ishaan gets back to life. At Raichand house, Agastya and Neelima celebrate Pakhi’s yes for marrying Agastya.

Neelima says, “Mrs. Pakhi Agastya Raichand” sounds good. Agastya agrees to Neelima. He says that now no one can come in between him and Pakhi. At the same time, Ishaan gains consciousness in Agastya’s hospital. He gets all the flashbacks of whatever happened before the attack on him. Next morning, Prema asks Pakhi if she didn’t try her wedding lehenga. Pakhi doesn’t reply as she seems lost in her sadness. Prema notices this and explains to Pakhi that a person should not always be lost in their sadness. She asks Pakhi to try to lessen her sadness. Pakhi gets up. Prema makes Pakhi wear her wedding dupatta and praises her beauty. Pakhi recalls Ishaan making her wear his mother’s wedding dupatta and romancing her before their marriage.

She feels dejected recalling Ishaan’s memories. Anup enters her room and asks Prema to have sweets. He tells Prema that these sweets are not for Pakhi’s marriage happiness but because they are getting their old customers and order back. Anup leaves telling that Pakhi made a good decision of marrying Agastya. He gets another order call and leaves. Anup’s words hurt Pakhi and Prema. Prema leaves telling Pakhi that she will get her smile back after marrying Agastya. Suddenly Pakhi’s alter ego appears and questions her decision. Her alter ego tells Pakhi that she is making a sacrifice for her family’s happiness. Alter ego also asks Pakhi if she would ever be able to love her best friend Agastya. Pakhi looks on.

In the next episode, Pakhi will get married to Agastya. Agastya will receive an anonymous letter. The person through this letter congratulates Agastya for making Pakhi his wife. He also tells Agastya that he has all the proof against the crimes he committed to marry Pakhi. Agastya will get shocked reading all this.

Reviewed Rating for Fanaa 3rd March 2022 Written Update Pakhi to marry Agastya: 2/5 This rating is solely based on the opinion of the writer. You may post your own take on the show in the comment section below.