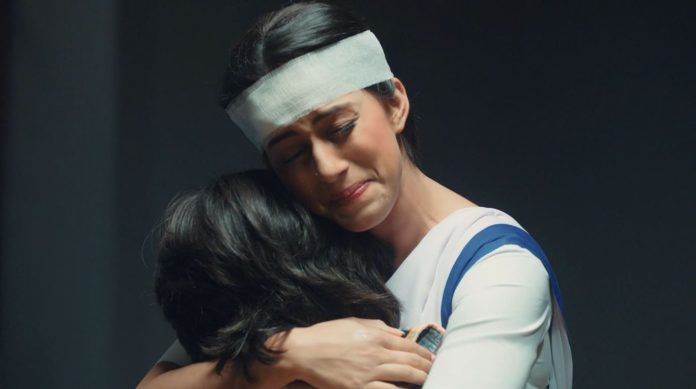 Yeh Hai Chahatein 3rd March 2022 Written Update Rebellion Rudra tells Bunty that he forgives him. He also gets ready to withdraw the case he filed against Bunty. Shocked inspector asks Rudra if he is realizing what he is saying. Rudra says he knows what he is doing. He says he knows Bunty did everything due to a misunderstanding. Rudra says Bunty did wrong thinking they are going to get Bubbles arrested. He tells the inspector that Bunty isn’t bad as he did everything in his wife’s love. Rudra glares at Prisha and says the worst people are those who do bad deeds intentionally.

He further says bad people are those who treat us worse than strangers, being our family. Rudra keeps on scolding Prisha indirectly and calls her love fake. Inspector asks Rudra whom he is talking about. Rudra points at Prisha and says he is talking about her. Yuvraj overhears everything and feels happy. He thinks of bringing Ruhi to make her see what Rudra is going to do with her mother. Yuvraj thinks this way Ruhi will hate Rudra and come back to him. Inside the ward Ruhi and Saaransh are seen playing Ludo with each other. Sharda is seen feeding food to Ruhi.

Ruhi tells Sharda that it’s good that the accident happened to her. Sharda tells Ruhi that she should not say this. Ruhi apologizes to Sharda. She tells Sharda that she is feeling good to be with everyone like a family. Saaransh tells Ruhi that they are a family. Yuvraj comes to take Ruhi with him. He asks Sharda to see what her son is doing. Outside, Rudra tells the inspector that the woman whom he is thinking to be Priya Sharma is actually his wife Mrs. Prisha Rudraksh Khurana. He also tells the inspector that Prisha staged her death 5 years ago to get saved from punishment for killing her biological brother Venky Srinivasan.

Rudra asks the inspector to check in his records that Prisha is a wanted criminal who was staying hidden from everyone, with a new identity of Dr. Priya Sharma. He asks the inspector to take Prisha away. Inspector asks Rudra if he knows what he is saying. Rudra says he knows what he is saying. He says he wants Prisha to get punished for all her mistakes and crimes. Except Yuvraj, everyone gets shocked hearing Rudra’s words. Rudra says Prisha has done injustice with him and his family. He also says that Prisha has betrayed him and killed his love and trust. Prisha and Ruhi feel much hurt with Rudra’s words. Yuvraj feels happy seeing and hearing all this. He thinks Ruhi will surely hate Rudra hearing all this.

He thinks after this he will make a heroic entry and save poor Prisha and Ruhi. Ruhi runs to Rudra and grabs his shirt. She tells him that nobody can take her mother anywhere. Ruhi asks Rudra why he is bad mouthing her mother and sending her to prison. She also asks Rudra if he is sending Prisha to prison because he is angry with her. She says her mother didn’t do anything. Rudra bends down to Ruhi’s height. He tells Ruhi that her mother did something very bad and should get punished. Ruhi angrily pushes Rudra away and hugs Prisha tightly. She says her mother won’t go anywhere. Ruhi says she loves her mother a lot and can’t stay without her.

Ruhi says she has no one except her mother. She also says that she doesn’t even have her father. Before Rudra could tell Ruhi about her father. Yuvraj tells Ruhi that he is not her real father but will take care of her and not let her be lonely. Prisha asks Yuvraj to stay quiet as it’s between her and Rudra. She says she will go to Prison if Rudra wants this only. Ruhi asks Prisha how she will stay without her. She tells Prisha that she will get alone if she goes to prison. Saaransh tells Ruhi that she would never get alone as he would always be with her. Prisha bends down to Ruhi and tells her that her brother Saaransh will always be with her.

Prisha asks Ruhi to be strong. She tells she is getting punished for hurting someone. Prisha hugs Ruhi. Saaransh says Ruhi would not get sad as her elder brother is with her. Prisha caresses Saaransh and unites him with his sister Ruhi. She hugs both of them tightly and leaves with the police. Rudra feels bad seeing his kids crying for their mother (Prisha). Sharda hugs Ruhi and tries to console her. Doctor sees Ruhi crying and scolda Rudra for giving her stress. Saaransh doesn’t let Rudra be near Ruhi and takes her to her ward. Rudra goes to the hospital temple and cries. Sharda scolds Rudra for getting Prisha attested. She asks Rudra if he didn’t think once how will little Ruhi tolerate all this and live without her mother.

Sharda tells Rudra that he gave punishment to Ruhi, Saaransh, her and himself. Rudra hugs Sharda and tells her that even he isn’t feeling good by doing this. Yuvraj follows Prisha and tells her that he will get her out of prison. Prisha warns Yuvraj to not use all this to his advantage and manipulate Ruhi. She says Rudra will take good care of Ruhi. Prisha asks Yuvraj to keep his bad intentions and thoughts away. She warns him to not try creating issues between her and Rudra. Prisha asks Yuvraj to stay away from her as well as her family. Yuvraj tells Prisha that she always rebuked him whenever he tried to help her. He also tells Prisha that she cared for Rudra whom she should rebuke.

He tells Prisha that he won’t show his face to her ever. Prisha tells Yuvraj it’s good. Police take Prisha with them. On the other hand, Rudra tells Sharda that Ruhi is his biological daughter. Sharda gets emotional and happy hearing this. She asks Rudra why Prisha lied and hit such a big thing from them. Rudra tells Sharda that Prisha intentionally wanted to keep Ruhi away from him. He tells Sharda that he got Prisha arrested because she kept his daughter away from him for 5 years. Rudra asks why Prisha kept Ruhi away from her if she didn’t want to live in prison. He says Prisha didn’t realize his pain. Rudra says if he would have been in Prisha’s place, he wouldn’t have separated a mother from her child.

He says why Prisha got involved with his enemy Yuvraj and made him believe that Ruhi is her and Yuvraj’s daughter using a fake DNA report. Rudra says he won’t forgive Prisha for keeping his daughter away from him. He says he won’t let Prisha meet Ruhi ever. Sharda asks Rudra to think that maybe Prisha was helpless. Rudra asks Sharda what type of helplessness made a mother keep her daughter away from her father for 5 years. He says Prisha became selfish and is herself responsible for whatever is happening with her. Rudra further says that he became so hard-hearted, only because of Prisha. He tells Sharda that Prisha will also suffer just like him for keeping his daughter away from him for the last 5 years.

He addresses Rudra as “Mr. Rudraksh Khurana” and asks him what punishment should he give him. Saaransh’s words shocks Rudra. Rudra asks Sharda how he should explain Saaransh. Saaransh says Rudra doesn’t have an answer to his questions. He asks Sharda to be with Ruhi as he is going to meet his mother (Prisha). Rudra stops Saaransh but Saaransh doesn’t let him. Saaransh tells Rudra that he is stubborn just like him. He says he would get his mother released from prison and leaves. Rudra says he knew Saaransh would do something like this as he is Prisha’s son. He says Prisha has given a good upbringing to Saaransh. Rudra says Prisha abandoned Saaransh 5 years ago but Saaransh never forgot Prisha or gave up on her.

Rudra says Saaransh has grown up and he is proud of him. Prisha gets shocked and surprised seeing that Saaransh came to meet her in prison. Both mother-son hug each other tightly. In the next episode, Saaransh will tell Prisha that he would even go against Rudra but not let her stay in prison. Saaransh will announce that Ruhi will stay in Khurana house only. Vaijayanti overhears this and wonders why Saaransh is taking Ruhi’s responsibility even when Yuvraj is available for this. Ruhi and Saaransh will start a mission to trouble Rudra.

Reviewed Rating for Yeh Hai Chahatein 3rd March 2022 Written Update Rebellion: 5/5 This rating is solely based on the opinion of the writer. You may post your own take on the show in the comment section below.