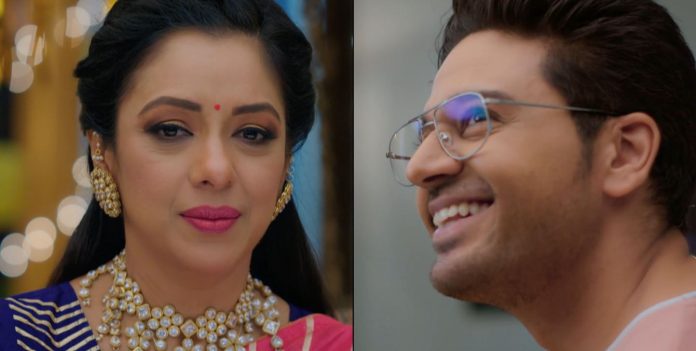 Kinjal says she found it difficult to stay with Baa initially but later on got used to it. She says Baa is nice and grumpy. Kinjal says however Baa is, she is hers and she (Kinjal) loves her. She says Bapuji, Samar, Pakhi and Paritosh everyone is with her. Rakhi tells Kinjal that if Anupama would have been staying with her, it would have been good for her at this stage (pregnancy) of her life. Kavya says she will take care of Kinjal. Rakhi asks Kavya that she will give tender coconut water to Kinjal everyday. She also tells Kavya that she will also check if Kinjal gets 8 hours of sleep. Rakhi further tells Kavya that she will do Yoga with Kinjal and make sure that Kinjal’ diet is loaded with green vegetables, low fat milk, vitamins, specially B12, calcium and iron.

She asks Kavya to also make sure that Kinjal eats dal, rice and pure ghee. Rakhi continues telling Kavya that she will take Kinjal to a doctor for regular check-up and won’t let her wear high heels. She tells Kavya that she won’t let Kinjal do strenuous work, have junk food and stand for long. Kavya gets shocked and scared. She asks if this much care needs to be taken. Rakhi tells Kavya that it’s just the beginning. She says that this is why she wished that Anupama would have been living in Shah house. Rakhi explains to Kinjal that no one else would be able to take proper pregnancy care of her in the Shah house, than Anupama.

Rakhi tells Anupama that she doesn’t stay at Shah house and without her Kinjal won’t be able to stay comfortably. She says Kinjal’s discomfort will cause immense pain to her. Rakhi threatens Anupama if she will be pained, then no one in Shah would be able to live with peace. Rakhi’s words shock everyone. Kinjal promises Rakhi that she will come to her if she will be in the slightest problem. Rakhi tells Kinjal that she is believing her for now. She makes it clear to everyone that she would be visiting Shah house regularly. Rakhi takes a leave asking Anupama to not bring disgrace to her name which has a mother’s affection.

Later, Anupama takes Kinjal to her room. Baa starts leaving to make juice for Kinjal, Kavya asks Baa to make a juice for her too. Baa irritatingly leaves to Kitchen. While making juice, she recalls Rakhi’s words and feels that Rakhi was right. She thinks if Anupama will live at Shah house, then Kinjal won’t have any discomfort. Anupama hugs Paritosh and tells him that now he is going to play the most important role in his life, that of a father. She tells Paritosh that he would have to do justice to his father’s role. Anupama also tells Paritosh that she understands that he is feeling scared of new responsibility but it’s an opportunity for him to live his childhood again.

She explains to Paritosh that he has got a huge opportunity to give shape to a new existence, knead his values in the malleable clay, to give a good person to the world. Anupama asks Paritosh to become a father like Bapuji. Anupama asks Paritosh to not take any tension as he will feel good when he will hold his child in his arms for the first time. She also asks Paritosh to either talk to her or anyone in the family if he feels any worries. Anupama further asks Paritosh to surely share his feelings with someone as everyone is with him. Paritosh signs yes and Anupama leaves. He goes to his room where Kinjal apologizes to him for not telling him about her pregnancy first.

Kinjal herself starts thinking that Paritosh is happy about their upcoming child. She shares her happiness and feelings with Paritosh. Paritosh shocks Kinjal by telling her that he isn’t ready to become a father right now. In the hall of Shah house, the whole family is seen discussing names for the upcoming baby. Paritosh apologizes to Kinjal and tells her that he understands her happiness. He explains to Kinjal that being a father is a great honor as well as responsibility, but he isn’t ready for it, right now. Paritosh tells Kinjal that they have time and can change their plans. Kinjal asks Paritosh where his thoughts were when they together decided and planned for their baby. She reminds Paritosh that both of them were ready to become parents.

Paritosh again apologizes to Kinjal and tells her that the situation is different now. Kinjal gets angry at Paritosh and tells him that she won’t let him harm her baby. Paritosh asks Kinjal to not get so emotional and think about his words rationally. Kinjal tells Paritosh that she doesn’t care about his rationality as a mother gets emotional if it’s about her child. Paritosh explains to Kinjal that according to his career growth he isn’t ready to become a father. Kinjal says to Paritosh that she will give birth to her baby and doesn’t care about his thinking. Paritosh asks Kinjal to not expect anything from him, if she is adamant on her decision. This shocks Kinjal badly.

Everyone outside discusses who will spend more time with the upcoming baby. Kavya says she will spend more time. Baa tells Kavya that she should hold her own baby. Kavya asks Baa to say this to her son (Vanraj). Everyone gets awkward with Kavya and Baa’s words. Paritosh and Kinjal for the last time request each other to think about their decisions once more. Kinjal remains determined on her decision. Paritosh makes it clear to Kinjal that he isn’t ready to take responsibility for the upcoming child. Kinjal says she will become a mother surely. Paritosh angrily leaves, making Kinjal cry profusely. Anupama, Baa, Bapuji and Vanraj reminisce about Paritosh’s birth. Kavya feels out of place.

On the other hand, Anuj laughs telling himself that he is going to become a proxy grandfather. He asks himself to smile as he isn’t married till now and is going to become a grandfather. Anuj says he is going to have a line of ready made family. He thinks God is blessing him generously. Kavya feels jealous and angry seeing Vanraj happy with Anupama and his family. She thinks Vanraj doesn’t care about her presence. In her thoughts Kavya says she will have to be selfish and her earlier decision was right as her presence doesn’t matter to Vanraj, for whom she left everything that belonged to her.

On the other hand, Anuj thanks God for giving so many relations to him through Anupama. He thinks that all relations that belong to Anupama will belong to him too. Anuj says he accepts all the relations. He thinks he is more handsome and smart than Vanraj. Anuj thinks he and Anupama would become the coolest grandparents. He says he will be a husband with killer looks. Baa notices Anupama and Vanraj talking and laughing together. She tells Vanraj and Anupama that she felt good seeing them talking to each other nicely. Baa also tells them that a husband-wife got separated but parents and grandparents can never get separated.

Baa’s words angers Kavya but makes Vanraj and Anupama awkward. Mamaji says it feels nice sitting with the whole family. Anupama thinks her family is incomplete without Anuj. She thinks it’s good that Anuj isn’t present here as he would have felt out of place. On the other hand, Anuj feels happy thinking that finally he will get married to Anupama now.

In the next episode, in front of the whole family Paritosh will reveal that he doesn’t want to become a father at this time. He will explain his feelings to everyone. Paritosh will say that babies become shackles for parents and stop their growth. Anupama will ask Paritosh to think with a cool mind. Paritosh will tell Anupama that he already gave everything a thought with a cool mind. He will say that he has made a decision that he doesn’t want this baby. Paritosh’s words will shock everyone. Anupama will guiltily tell Anuj that Kinjal and her family will need her now, more than earlier.

Reviewed Rating for Anupama 5th March 2022 Written Update Random decision: 5/5 This rating is solely based on the opinion of the writer. You may post your own take on the show in the comment section below.