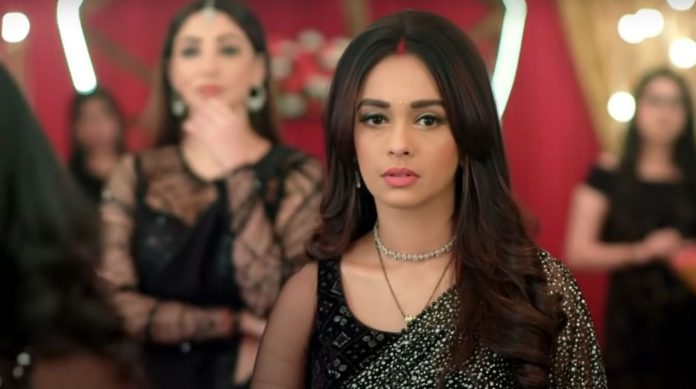 Kumkum Bhagya 7th March 2022 Written Update Prachi Big news Rhea tells Aaliya that whoever tells Ranbir the big news of Prachi’s pregnancy, will have an upper hand. She explains that if he gets the news from Prachi first, then he will believe her, and then they can’t do anything. She tells that the person who tells first is the winner, the next person is just a defender. She means to say that if she tells Ranbir about Prachi’s pregnancy, then it will be like a shock for Ranbir, who would be confused thinking about the reason that Prachi has kept it a secret till now.

She adds that Ranbir will not trust Prachi then, no matter how much Prachi defends herself and calls the baby as Ranbir’s. She tells Aaliya that she has called the doctor home with the duplicate reports, and very soon the pregnancy confirmation will be in their hands. Aaliya asks Rhea to win it, and not let Prachi go away with Ranbir this time. She encourages Rhea. Rhea goes to call the attention of one and all, because she has a big news to share. She tells that its about her lovely sister, they will be seen Prachi’s unique style. She announces the big news.

Prachi senses if Rhea is going to tell about her pregnancy. She just wants to take Ranbir with her and tell him the good news of their baby. Prachi and Ranbir have a moment. Ranbir wants to know what Rhea has to say. Rhea will break the pregnancy news in a bad light, and malign Prachi’s character again. Will Rhea succeed in creating a rift between them, by showing Siddharth and Prachi’s pictures? Will Ranbir make a mistake once again to lift his faith from Prachi? Keep reading.

Prachi waits for Ranbir. Shahana keeps an eye on Rhea. She calls Ranbir to know where did he go. She finds Prachi alone. Rhea goes to Prachi to ask where is Prachi heading. Prachi tells that she is trying to go away from Rhea. Rhea tells that what should happen for their good shall happen now. Prachi also believes so. Rhea tells Pallavi that she has to give a big surprise to Vikram and Pallavi. Vikram and Dida find Rhea too happy and get worried thinking what is she upto. Dida tells that Rhea may bring a storm. Rhea gets everyone’s attention. She tells that she wants to tell everyone that she is very happy. She wants Ranbir on her side. She seeks his support.

She tells that she wants Ranbir and her to become a perfect couple. Rhea performs the dance with Ranbir to make Prachi jealous. Ranbir gets helpless. He finds Prachi getting upset. He doesn’t want any misunderstanding between Prachi and him again. He is compelled to dance with Rhea. Rhea saddens Prachi. She hugs Ranbir. Ranbir gets away from Rhea. Prachi tells him that she was going to terrace to talk to him. Ranbir tells that he was already there to talk to her, but Shahana has called him in the party. Prachi takes Ranbir to the terrace to break the news. Rhea thanks all the guests for coming. She calls the doctor there. Aaliya knows that Rhea wants to expose Prachi through Dr. Pooja.

Aaliya is glad that Rhea is going in the right direction. Rhea tells that she has called the doctor, she is the chief guest for the event. She tells them that Dr. Pooja is going to tell them something important. She looks for Prachi. She tells them that she will go and bring Prachi who really needs to be there. Prachi apologizes to Ranbir, who doesn’t want her to feel guilty. He knows that she got angry seeing him with Rhea. He asks the reason. She tells that he knows the real reason why she was angry on him. He wants to hear that she loves him. They get into a moment. He dances with her, saying she wanted to dance with him. She tells that she wants to be with him forever, and celebrate every occasion of her life.

She tells that she wants her children to celebrate their anniversary. He tells that it will happen, but they have to plan their children to make this possible. She tells that she has got him to tell something. He tells her that he already knows it, he has seen her surprise already. She thinks he has seen the card and learnt about her pregnancy. She asks him if he has got happy seeing the surprise. Rhea looks for Prachi. She asks Aaliya about Prachi. She tells that its all about timing, whoever tells Ranbir about the pregnancy will win, she has to tell Ranbir the truth and win his trust. She wants to go and check the terrace. Aaliya tells that Prachi won’t go there. Rhea tells that Prachi has got the terrace decorated for a reason.

Aaliya asks Pallavi to help her find Ranbir. Ranbir tells Prachi that he was waiting for this happiness, that she is behaving so nicely with him. Prachi tells that she wanted to tell him something really important. She is about to tell him that she is pregnant. She gets scared of the sudden thundering. She hugs him. Ranbir and Prachi get surprised by the uninvited rain. She gets worried by the bad omen. He tells that nothing will happen, the rains will just bring them closer. Pallavi and Aaliya find them, and take away Ranbir for the cake cutting ceremony.

Ranbir holds Prachi’s hand. Aaliya wants Prachi to get separated from Ranbir. Rhea finds Prachi back. She begins her move of humiliating Prachi. She tells that Prachi deserves their praise. She apologizes to Prachi that she can’t hide the secret for a long time. She reminds Prachi what she is going to disclose. Prachi doesn’t want the pregnancy news to get revealed this way. She fears Ranbir’s wrong reaction. Rhea tells that she has a big news to reveal. Prachi pretends to faint down, and stops Rhea from making the announcement.

Rhea asks Ranbir to relax, the doctor will check Prachi and tell them the results of Prachi’s reports. Prachi gets up and tells that she has to talk to Rhea. Rhea asks Prachi what does she want to do at this time. She taunts that Prachi will just beg to her. Shahana interrupts Rhea. Rhea rebukes her for lying to Ranbir. Shahana asks Ranbir to just follow his heart. Prachi tells him that everything is a lie, he just have to follow his heart. Rhea tells that she will entertain them first. She asks Aaliya to play the surprise. Dr. Pooja tells that she doesn’t care about Prachi’s past, she just knows that Prachi is pregnant, her pregnancy is complicated.

Prachi learns Rhea’s plans from the doctor. Rhea tells that she is going some interesting photos to them. She asks Ranbir to leave Prachi. Ranbir tells Prachi that he doesn’t understand what is happening. He doesn’t want to know anything that he should have known before. He tells that he will always love her, but he feels bad when she hides things. He gives her a chance to admit the truth, which Rhea is trying to tell him. He tells that Rhea always spoils the matters. He asks her to trust him and tell the truth, else it will be too late. Prachi is sure that Rhea is going to tell her pregnancy reports. She tells him that its already late. What will happen next? Stay tuned.

Reviewed Rating for Kumkum Bhagya 7th March 2022 Written Update Prachi Big news: 5/5 This rating is solely based on the opinion of the writer. You may post your own take on the show in the comment section below.