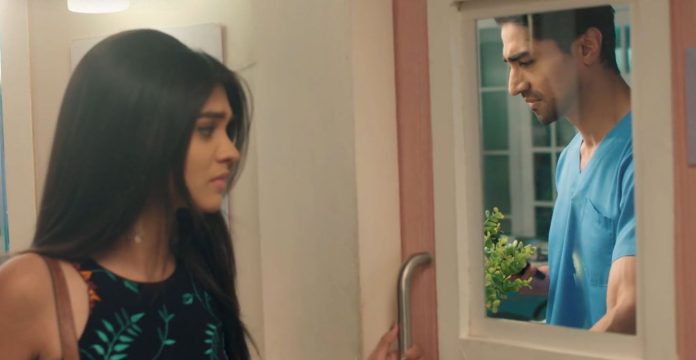 Manjiri agrees to Suhasini. Swarna tells Manjiri that she wishes and hopes that everything goes fine this time. Tense Manjiri says that she hopes the same. Swarna asks Manjiri if she could meet everyone this evening together to make final decisions about children’s marriage. Manjiri agrees to Swarna. After the call gets disconnected, Suhasini tells Swarna that she feels that Manjiri isn’t happy with this marriage. She worries thinking that something tense is going on in Birla house. Swarna asks Suhasini to not think like this as everything would go fine. Suhasini says she feels that everything will go better this time and everyone’s happiness won’t get ruined.

Akshara feels happy hearing this, while Aarohi feels very angry. She cries seeing Kartik and Sirat’s photograph. Kairav collides with Aarohi and asks her why she is crying. Aarohi tells Kairav that she is happy for him, Anisha, Akshara and Abhimanyu from inside but herself is feeling alone. She says everyone has the reason to be happy but she doesn’t have any. Kairav tells Aarohi that everyone is with her. Aarohi tells Kairav that she knows this but she doesn’t have anyone to talk to alone. She also tells Kairav that she is recalling her wedding day and whatever happened at that time. Aarohi says everyone is happy and has forgotten the time when she lost everything and her happiness. She also says that everyone is happy for Akshara but can’t see her pain which she is going through now.

Aarohi tells Kairav that she is feeling like crying recalling the day when lost her happiness, standing in bridal wear. She says she isn’t a robot and feels pain too. Aarohi cries and tells Kairav that she has become alone. Kairav explains to Aarohi that nobody has forgotten anything but are just moving on. He tells Aarohi that she should be happy that her brother and sister are finally getting their love. Aarohi tells Kairav that she is genuinely for him and Akshara but unhappy for herself. She says that she isn’t able to express her sadness or share her pain with anyone. Kairav hugs Aarohi tightly and asks her to cry as much as she wants to, to take out the feeling from her heart that nobody cares about her.

Abhimanyu replies yes and asks Akshara to leave for now as an important patient is waiting for him right now. Akshara feels weird and leaves. Abhimanyu wonders why Harshvardhan himself called Akshara to the hospital. Akshara enters Harshvardhan’s cabin. Harshvardhan gives hospital rejoining papers to Akshara and asks her to sign them. While Akshara signs the papers, Harshvardhan recalls how Abhimanyu always misbehaved with him for Akshara. Harshvardhan calls Askhara a master blaster player. He tells Akshara that the person opposite her doesn’t get the opportunity to save himself when she uses her innocent face to attack someone.

Anisha hugs a worried Manjiri. At the hospital, Abhimanyu finds Akshara sitting on his chair in his cabin. He says he is amazed to see that his to-be wife has captured his chair before marriage. Akshara asks Abhimanyu how he can uninvite his own from his wedding. Abhimanyu feels frustrated on knowing that Harshvardhan told Akahara everything that happened at their home. Akshara tells Abhimanyu that they can’t marry without their complete family’s wedding. She reminds Abhimanyu that he also convinced Manish for their marriage. Akshara asks Abhimanyu how she can marry him without his father’s blessings and will.

Abhimanyu requests Akshara to note lecture him as she doesn’t know what happened between him and Harshvardhan yesterday. Akshara tells Abhimanyu that she isn’t lecturing him but instead requesting him. She says she wants her whole family in her wedding. Abhimanyu tells Akshara that everyone would be present except Harshvardhan. Akshara tells Abhimanyu that Harshvardhan may be sir for him but for her he is going to be her father-in-law, equal to her father’s status. She says that she doesn’t have her own father and doesn’t want to lose her father-in-law. Akshara explains the importance and relevance of a father. Abhimanyu requests Akshara to not be stubborn and support him as he is already very stressed with whatever happened at his home yesterday.

Reviewed Rating for Yeh Rishta 5th March 2022 Written Update Abhi upsets Akshara: 5/5 This rating is solely based on the opinion of the writer. You may post your own take on the show in the comment section below.