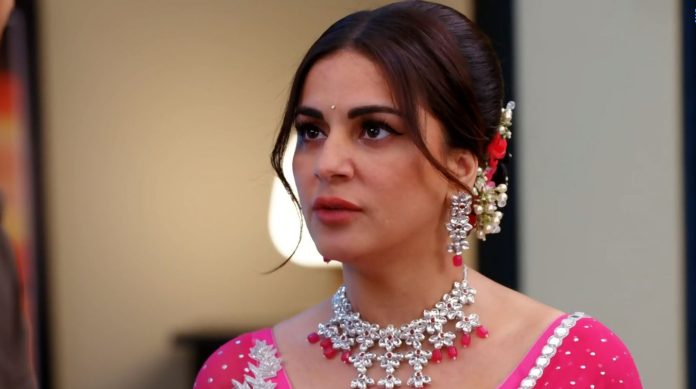 Kundali Bhagya 7th March 2022 Written Update Challenge for Preeta Preeta gets challenging Prithvi. She tells him that she will soon end his entire game. She adds that he will be shattered when she ends his story, the night will be proved really fatal for him. She threatens him that he will be struck by something so shocking that he can’t imagine. She finally concludes that the night will be his last night in the house. He gets too scared on hearing that. The family brings Mahesh in the party. Rakhi and Kareena stay with him. Mahesh gets delighted to see the lovely birthday bash arrangements. Sameer tries to talk to Shrishti. The family is very happy to see Mahesh calm and comfortable. Sherlyn keeps an eye on Preeta to know her plans. Natasha troubles Shrishti.

Sherlyn stops Shrishti who goes away from the party to find Preeta. Natasha plans to kidnap Shrishti. She finds a chance to attack Shrishti. She hits Shrishti on her head to faint her. Sherlyn reaches there. Sherlyn and Natasha drag Shrishti to hide her. They are working for Prithvi. Prithvi got Shrishti captive in order to pressurize Preeta. Shrishti gets rescued by Sameer. Natasha too acts unconscious in front of them to get saved from the suspicion. Shrishti tells Sameer that something is not right, Preeta might have fallen in danger, it could be Prithvi’s plan. Sameer takes Shrishti with him, and fails Natasha’s plans. It becomes a challenge for Preeta now to protect her loves ones and defeat Prithvi.

Earlier in the show, Karan kisses Preeta when she threatens of faking the funny stories about him. He teases her and laughs. Preeta smiles. She doesn’t want to think of anything, than her goals. She has to rescue Mahesh and prove him mentally stable first. She directs her mind on her goals.

Biji doesn’t want Shrishti to tell everyone that she had taken the cough syrup. She doesn’t help Shrishti and goes out of the room. Shrishti asks Biji to help her. Sameer reaches there and hears Shrishti’s call. He goes to help her. She sees him and stops him. She tells that he can’t try his foolish things. He apologizes to her when she refuses to take his help. She clarifies that she was asking Biji to help her. On the other hand, Naagre tells Prithvi that nobody can defeat and destroy Prithvi, until Mahesh gets mentally stable. He asks Prithvi to get another Mona for Mahesh’s treatment. Prithvi is relieved that Naagre is saying positive things about him.

He tells that he is happy to hear such encouraging words. Naagre asks him to stay alert and keep an eye on everybody around. Sherlyn tells that Preeta just wants to scare Prithvi and break his confidence, so she has invited the judge in the party. Naagre asks Prithvi about Sherlyn and his relationship. He asks how is Prithvi able to hide his relationship from Luthras. Prithvi tells that he is the king of smartness, he can manage such things with ease. Karan gets compliments from Natasha. She flirts with him, which makes Preeta interrupt out of jealousy. Karan asks Preeta if she is jealous now. Karan tells that she isn’t jealous.

She asks Karan if he is saying their secrets to Natasha. She tells about his naughty romance and their kiss. Natasha thought they are on bad terms. She doesn’t understand their relationship. Karan asks Preeta why did she tell Natasha about their kiss, now Natasha will tease him. She tells that it will be good. She alerts him of Natasha, who was flirting with him. He asks her why is she jealous and possessive. She tells that she isn’t possessive, but he is her possession, their have a relationship. He calls her jealous and irritated. He asks her to say that she loves him. Mahesh arrives in the party. The family sings a birthday song for him.

Mahesh hugs Karan with love. Karan cries emotionally. He tells that he is very happy today. Preeta loses out on her emotions. She goes away from the party. Mahesh asks for Preeta. Karan looks for Preeta. Mahesh gets the wishes from the family members. Naagre asks Prithvi not to go in front of Mahesh, who can get reminded of Prithvi’s old crimes. The judge comes to meet Mahesh, on Preeta’s request. He wishes Mahesh on his birthday. Prithvi asks Naagre how did the judge come in the party, when he doesn’t attend social gatherings. He wants to know what is Preeta planning.

Biji asks Preeta to see that Karan is flirting with her. Karan tells that Preeta won’t be angry on them. Preeta gets informed by Shrishti that the judge has come. Karan calls her jealous. Prithvi wants to know why did Preeta invite the judge. Sherlyn answers that Preeta invited the judge to make him declare Mahesh normal. He tells that it will be a big loss for Preeta also, she will lose out everything. He doesn’t think that’s the reason. She asks him to guess the reason. He asks her to go and find out. Naagre finds Sherlyn saying the right thing. Prithvi doesn’t believe them. He wants to know the hidden real motives. He asks Naagre to see Preeta’s confidence. Naagre asks what will he do now. Preeta tells that he will burn the place, and leaves Naagre shocked.

Reviewed Rating for Kundali Bhagya 7th March 2022 Written Update Challenge for Preeta: 5/5 This rating is solely based on the opinion of the writer. You may post your own take on the show in the comment section below.