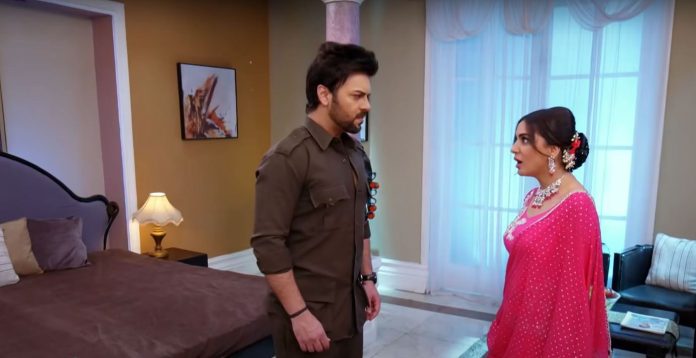 Kundali Bhagya 8th March 2022 Written Update Big stake Preeta gets emotional on meeting Mahesh. She performs in the party and expresses her happiness. She feels a lot for the family, but doesn’t show it to them. She wants to stay stern and powerful, still her emotions make her fall weak. Preeta takes Shrishti for the dance. Prithvi comes between on the dance floor. Preeta makes him the villain figure and taunts him. He gets enraged. Preeta tells him that anything can happen tonight, it will be his last day in the Luthra house. She takes Mahesh to meet the judge, who had declared him mentally unstable. She tells that Mahesh is doing well, he is completely okay and should be certified normal. Prithvi is confident to ruin Preeta’s plan. He initiates his plan and spreads the smoke causing uneasiness to Mahesh. He wants Mahesh to react mentally unstable again and falls in the judge’s sight again. He tells that the judge will declare Mahesh unstable once again, and this time the family will blame Preeta for bringing disgrace for them. Prithvi and Preeta put everything at stake. Who will win? Keep reading.

Earlier in the show, Prithvi wants to know why did Preeta invite the judge. Sherlyn answers that Preeta invited the judge to make him declare Mahesh normal. He tells that it will be a big loss for Preeta also, she will lose out everything. He doesn’t think that’s the reason. She asks him to guess the reason. He asks her to go and find out. Naagre finds Sherlyn saying the right thing. Prithvi doesn’t believe them. He wants to know the hidden real motives. He asks Naagre to see Preeta’s confidence. Naagre asks what will he do now. Preeta tells that he will burn the place, and leaves Naagre shocked.

Prithvi tells Naagre that he will play a big game, the judge will never declare Mahesh a normal man now. Karan asks Biji who has called the judge in the party. She tells that Preeta has called them. Prithvi asks Preeta what does she want to do. She asks him what does he want. He doesn’t want her to change her planning. He thinks she might do something that he doesn’t know. He asks her motives. She asks him not to get so terrified. She tells that he will soon know it all. She welcomes the guests in the party. Preeta sings an emotional song for Mahesh and dances in the party. Prithvi angrily heads to his room. He breaks as many things as he can. He goes to take some pills.

Sherlyn tells that he will go mad if he takes drugs. She stops him. He tells that Preeta is making her mad. She asks him to calm down. He feels he is losing out. She encourages him. He takes the drugs. He tells that he is feeling let down by Preeta, either Preeta or him will win this battle. He tells that he will drag Preeta in front of everyone and ask her motives, he will disappear her and end her drama. Sherlyn asks him to stop. He joins Preeta on the dance floor. He triggers the smoke emitter machine. Mahesh gets troubled by the smoke. Sameer and Bani take care of him. Prithvi catches Preeta and takes her away from the dance floor. Karan looks for Preeta. Preeta pushes away Prithvi. She asks his problem. He tells that it’s a reality show, he had dragged her from the stage.

She pities him that he is getting frustrated, he wants her answers. He asks her why did she call the lawyer and the judge in the party, when just family was invited. She tells that the judge will declare Mahesh normal, then Mahesh will never go back to the basement, he will stay with the family from now. He is shocked to know her motives. He tells that she is making a big mistake again, that she told the plan to him. He isn’t emotional like Karan and Rakhi. He tells that he just thinks from his mind. He knows why Preeta called the judge, just to declare that Mahesh isn’t mad.

He is confused that she is taking revenge on Luthras, but not Mahesh. He asks her did she come home to take revenge on him. Karan questions Sherlyn. She tells that Preeta wanted to surprise everyone by this disappearing act. Bani finds the act disgusting. Biji asks Sherlyn how does she know this. Kritika asks Karan not to panic, Preeta would be around in the house. Judge appreciates Preeta and Shrishti’s energetic and emotional performance. Sherlyn wants to warn Prithvi that Karan is desperately looking for Preeta.

Reviewed Rating for Kundali Bhagya 8th March 2022 Written Update Big stake: 5/5 This rating is solely based on the opinion of the writer. You may post your own take on the show in the comment section below.