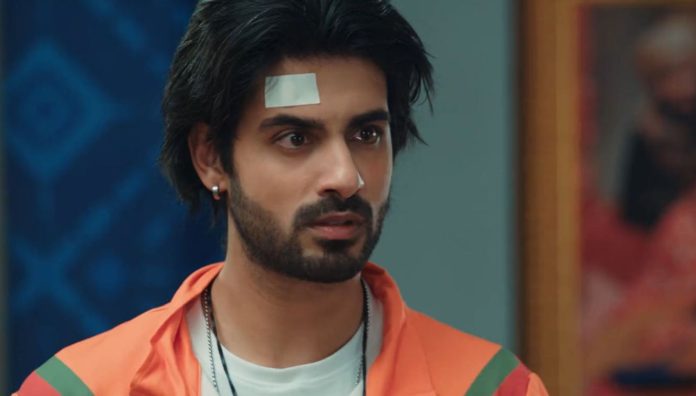 Yeh Hai Chahatein 7th March 2022 Written Update Court trials Saaransh and Ruhi greet good morning to each other. Saaransh gives fresh juice to Ruhi. Ruhi tells Saaransh that she slept well as Sharda slept with her. She asks Saaransh if got any lawyer for Prisha’s case. Vaijayanti comes there and Saaransh introduces her to Ruhi as his aunt. Saaransh tells Ruhi that Vaijayanti is a brilliant lawyer and will fight Prisha’s case. Ruhi hugs Vaijayanti and thanks her. Vaijayanti says, “Your welcome Nani Maa” to Ruhi. Rudra is seen standing outside the room with breakfast for Ruhi. He overhears everything and gets angry.

Vaijayanti says that she has no place and duty left at Khurana house as Prisha has returned. She tells Rudra that before leaving she wants to get Prisha released from prison for him. Rudra angrily says he doesn’t want to talk about, selfish and deceiver Prisha. He says he loved Prisha a lot but she lied and hid herself as well as Ruhi from him. Rudra tells Vaijayanti that Prisha snatched Ruhi’s childhood from him. He asks Vaijayanti if the last 5 years of life which he and Ruhi lost with each other will come back. He says Prisha kept Ruhi with her in struggle and poor life. Rudra further says if Ruhi would have been with him, he would have taken good care of her and would have kept her in every comfort.

Vaijayanti accepts Rudra’s challenge. She tells Rudra that no one will be able to stop her from getting her sister (Prisha) released from prison, not even him. Vaijayanti leaves Rudra angry. He says no one understands that it’s his pain, not anger. He breaks down in tears. Ruhi tells Saaransh that she is happy that her mother will get released from prison. She asks Saaransh what about their other plan to trouble Rudra. Saaransh tells Ruhi that they will make Rudra late for his meeting with investors that is going to happen at their house in some time. He also tells Ruhi that he has many super duper ideas to trouble Rudra. Saaransh explains all his plans to Ruhi.

Both brother and sister give each other a high five. Rudra is seen taking a shower and covered in soap foam. Suddenly water from his shower stops. He calls Sharda and Saaransh for help. Rudra comes out of his bathroom, covered in foam and towel. Saaransh and Ruhi sitting outside the bathroom teases Rudra and takes his photographs. Ruhi and Saaransh teases Rudra and makes fun of him. Rudra angrily asks Saaransh and Ruhi how they can laugh at him in this situation. By mistake and in innocence Ruhi tells Rudra that they didn’t stop water. Rudra asks Ruhi how she got to know that water stopped in his bathroom.

Rudra gets shocked to see that Saaransh uploaded his foam covered photograph on social media. He says his kids made him a towel star from rockstar and he can’t even scold them. Ruhi and Saaransh sit at the dining table on both sides of Rudra and laugh seeing his condition. They ask Rudra if he didn’t like his photograph. Both of them tease Rudra and call him cute. Rudra asks Saaransh to not do this as it doesn’t look good according to his age. Ruhi tells Rudra that he has grown up too but what he did with Prisha wasn’t right either. Rudra says he doesn’t want to talk about it as he has an important meeting soon. He gets a call from his agent who asks him how he can let his towel photograph get uploaded on social media.

Rudra tells the agent that Saaransh uploaded it as a joke and he would get it deleted. In the meantime, Ruhi changes Rudra’s cooked egg with a raw one. He starts eating his breakfast while talking to his agent. He breaks the egg and all it’s inside content gets poured all over him. Ruhi and Saaransh laugh seeing all this. He asks the agent to bring investors to his home as he can’t reach the office. Saaransh stops Rudra from using foul words in front of Ruhi in anger. Rudra says his whole day got ruined and he has got stressed. He leaves to take a bath once again and keeps his clothes outside. Rudra comes out of the bathroom to change and gets scared seeing a fake lizard on his clothes. He runs outside in his towel.

Ruhi and Saaransh use this opportunity and cut Rudra’s clothes in his absence. Rudra runs downstairs in a towel. The Agent and investors get shocked seeing Rudra in this condition. Agent asks Rudra why he came downstairs like this. Rudra tells the agent that there was a lizard on his clothes and he is scared of lizards. Investors try to stop their laughs seeing Rudra’s condition. Ruhi and Saaransh come downstairs and scare Rudra more with the fake lizard. Rudra runs here and there and asks Ruhi to throw away the filthy lizard. Ruhi makes Rudra run in the towel in the whole house in front of investors by scaring him with the fake lizard. Saaransh laughs seeing all this.

Ruhi tells Rudra that initially he used to feel scared of cockroaches and now is getting scared of house lizards too. She tells Rudra that it’s a fake gecko (lizard). Rudra gows go to wear clothes. His agent makes investors sit and wait for Rudra. Rudra comes downstairs wearing torn clothes. Agent tells Rudra that they need to give all the project details to the investors. Rudra turns to get the detailed papers for investors. Everyone gets shocked to see Rudra’s clothes torn from behind. Investors laugh at Rudra seeing this. Agent informs Rudra about the big whole in his clothes. Rudra gets shocked seeing his torn clothes. Agent asks Rudra what has happened to him.

Reviewed Rating for Yeh Hai Chahatein 7th March 2022 Written Update Court trials: 3/5 This rating is solely based on the opinion of the writer. You may post your own take on the show in the comment section below.