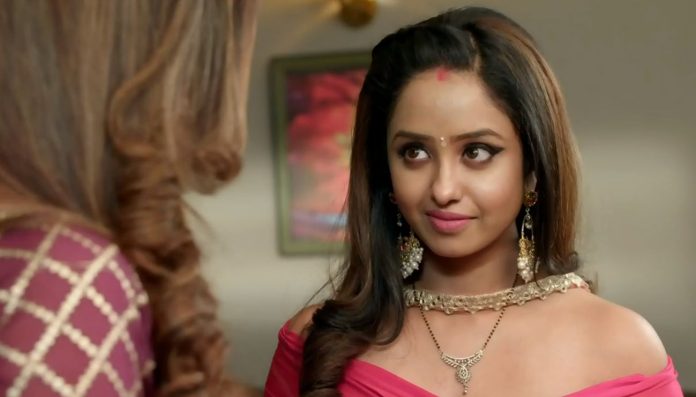 Kumkum Bhagya 9th March 2022 Written Update New plotting Rhea and Aaliya get planning new conspiracies against Prachi. Rhea wants to make a big move this time by which she can win Ranbir. She goes mad in anger when Pallavi rebukes her for spreading the rumours of Prachi’s pregnancy. Rhea fails in proving that Prachi is pregnant. Prachi wants some time to tell the truth to Ranbir, so that he doesn’t believe anything wrong about Siddharth and her. Rhea focusses on Ranbir even more. She tells Aaliya that whenever they plan anything against Prachi and challenge her, they lose out, but they always win when they work out their plan secretly.

Aaliya asks her not to do any stupidity this time. She tells that this time they will win. She asks Rhea to spike Ranbir’s thandai, then he will get intoxicated and force Rhea to take him to his room. She adds that Rhea should take him in that weak moment, and then nobody can stop Ranbir and her honeymoon, not even Prachi. She gives a big hope to Rhea. Rhea madly believes that this is really going to happen. What twists will come when Rhea’s plan brings Ranbir and Prachi closer? Will Prachi get a chance to break the pregnancy news to Ranbir? Keep reading.

Earlier in the show, Doctor tells her that Ranbir loves her a lot, Rhea is attempting to snatch Ranbir. She relates to Prachi’s issue, after losing her husband to the second woman. She encourages Prachi to fight for her husband. Shahana asks Prachi to tell Ranbir about her pregnancy soon. She tells that Rhea had taken Siddharth and Prachi’s pictures and was going to show that to everyone in the party. She adds that she had deleted the pictures from Rhea’s phone. Prachi thanks her for saving her. She hugs Shahana.

Rhea cleans the black colours off her face. she angrily ruins her entire room. Aaliya asks her to calm down. Rhea asks how could Prachi defeat her. She had thought that Prachi would be out, but she was playing some game beforehand. She pities herself. Aaliya consoles her. Rhea tells that her plan failed, Prachi is still inside the house. She wants to know why this happens with them all the time. She can’t take the humiliation. She asks Aaliya how does Prachi win all the time. She tells that she was also telling the truth about Ranbir, the doctor changed her words and the NGO ladies also changed their verdict.

She tells that she didn’t lie to anyone, Prachi was pregnant and that too with Siddharth’s child. She wants to know where did the reports go. She asks Aaliya is she with Prachi. Aaliya asks Rhea to stop thinking wrong. Rhea accuses Aaliya. Aaliya tells that she is with her. Rhea asks Aaliya why didn’t she find the reports. Aaliya wants to talk to her when she calms down. Rhea rebukes Aaliya’s zero results. She tells that Prachi and Ranbir always come together. She feels there is more humiliation left to happen. She asks Aaliya to not give her useless ideas. She calls Aaliya useless.

She tells that Pragya and Abhi always stayed together, while Aaliya’s husband left her. Aaliya slaps her and asks her to solve her problems on her own. She gets hurt by Rhea’s words. Rhea shouts that she will handle her own mess and win over Prachi. She can’t stand Prachi. On the other hand, Prachi goes to meet Ranbir and tell him about their baby. Ranbir is already in tension that his business file is missing. He wants some help. He doesn’t know what to do. He feels his BP is getting high. Prachi doesn’t want to talk to Ranbir when he is tensed. She decides to talk to him in the morning and patch up on the day of Shiv ratri. Shahana finds Prachi outside Ranbir’s room.

She wants Prachi to tell the truth to Ranbir before Rhea does something again. Meanwhile, Pallavi meets Rhea. Rhea tries to lift the thrown down things. Pallavi asks Rhea why didn’t she tell her plan before. She calls Rhea wrong. She tells that Rhea has become bad in everyone’s sight by hurting Prachi’s dignity. A disappointed Pallavi warns her. She tells that she is with her to separate Ranbir and Prachi, but she can’t support her in wrong plans. She stops Rhea from clarifying things more. She counts Rhea’s mistakes. She asks her not to spoil the Shivratri celebrations like she spoiled the anniversary party. She tells that Shivratri is a big day for Vikram.

Later, Kohlis make the Shivratri prayers. Ranbir and Rhea perform the aarti together. Pallavi makes Prachi away. Dida gets Prachi blessed by the pandit. Pandit blesses Ranbir and Prachi to have kids. Pallavi thinks the blessing won’t make any effect, because Prachi isn’t her Bahu. She asks Rhea to take Pandit’s blessings. The family discusses about the Shivratri. Ranbir and Vikram want to go home and have thandai. The family goes back home from the temple. Prachi takes Vikram’s side. Rhea gets angry seeing Prachi showing her rights on Ranbir and his family.

Prachi asks Rhea to see the date and know her place. Rhea asks Ranbir to see what Prachi told to her. Ranbir doesn’t react. She asks him to warn Prachi. He tells that he doesn’t want to talk between the sisters. He rebukes her for spoiling Pallavi and Vikram’s anniversary party and the family respect. He tells that Prachi defended Rhea from the NGO ladies, she was behaving like an elder sister, she was concerned for Rhea. He defends Prachi. He asks Rhea to respect women. Rhea sees Aaliya. She remembers her bitter words to Aaliya. She regrets her words.

Aaliya takes Rhea with her. She forgives Rhea, knowing she had told that in anger. She asks Rhea not to behave badly with her. She tells that she got a reason for their repeated defeat, because they always challenged Prachi and she won in counter planning. She asks Rhea to make a winning move by keeping Prachi in darkness. She reminds that Prachi got Vikram and Dida on her side. Rhea understands what Aaliya means to say. Aaliya suggests her to spike Ranbir’s thandai and win him over. Rhea likes her plan.

Reviewed Rating for Kumkum Bhagya 9th March 2022 Written Update New plotting: 3/5 This rating is solely based on the opinion of the writer. You may post your own take on the show in the comment section below.