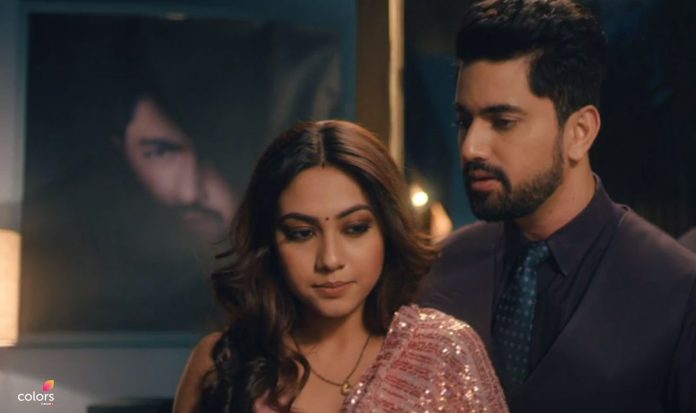 Fanaa 8th March 2022 Written Update Romance begins Pakhi thanks Agastya for what he did for her family. Agastya asks Pakhi if Shanaya and Prema are just her family, not his. Pakhi asks Agastya if he and Neelima would have any objection if she starts working again. She tells Agastya that she wants to support Prema and Shanaya. Agastya asks Pakhi if she thinks that they live in the previous century. He tells Pakhi that she is an independent girl and can take her decision herself. Agastya also tells Pakhi that she doesn’t need to take his and Neelima’s permission to do anything.

He knocks on a door and threatens the person inside to stop making noises. Agastya requests the person inside to stop making noises as he will soon give him a party for his marriage. Agastya returns back to his room. Next morning, Neelima makes Pakhi wear beautiful diamond bangles. She tells Pakhi that diamond’s sparks get faded in front of her beauty. Pakhi tells Neelima that she can’t accept expensive gifts from her. Neelima tells Pakhi that she has full rights on the bangles as well as the whole house. She also tells Pakhi that today is her “pehli rasoi’ ritual and every new bride or daughter-in-law performs it. She asks Pakhi to not take tension and cook whatever she wants as no one here will judge her.

Neelima asks Pakhi to go to the kitchen in some time as the chef would be waiting for her inside. She leaves when Pakhi says fine. Pakhi thinks that she will have to try so that everyone would like the food made by her. She thinks she will have to do it as she has made a commitment by marrying Agastya. At Srivastava house, Prema tells Shanaya that the tea made by her tastes bitter. Shanya comes to check it. They receive Pakhi’s call. Pakhi asks Prema to suggest to her what she should make for her “pehli rasoi” ritual. She says she knows only basic cooking but Agastya’s family would be expecting that she will cook something good.

Pakhi reminds Prema that her chapati becomes hard like papad and is the biggest problem. Shanya asks Pakhi to order from outside as no one will get to know about it. Pakhi refuses to cheat. Prema asks Pakhi what she wants to cook. Pakhi asks Prema if she remembers that she used to make paneer sabzi for Sameer which he used to eat happily. Prema tells Pakhi that she remembers it. Pakhi asks Prema to give her paneer sabzi recipe to her. Prema teases Pakhi and tells her that she will give her the recipe she needs. She asks Pakhi to try to remain happy and give a chance to her and Agastya’s relationship. Prema tells Pakhi that she is sure that she couldn’t have gotten a guy better than Agastya.

Yug decrypts and tells Agastya that the letters he has been receiving are typed by a typewriter. Agastya tells Yug that the person sending threatening letters to him is a very clever person and isn’t leaving anything behind that could track him. Yug asks Agastya how did the sender of the threatening letters get to know what they did with Ishaan. Agastya tells Yug that someone exists, who knows whatever they have done. Yug tells Agastya he isn’t getting any information about the sender. Agastya suspects some person named Nagpal. Yug tells Agastya that it isn’t Nagpal. Next, Agastya suspects Virat as his blackmailer.

Yug tells Agastya that they can bribe Virat. Agastya tells Yug that bribing Virat is almost impossible. He says he researched about Virat and Virat is an upright officer. Agastya tells Yug that many people tried bribing Virat but failed. Yug tells Agastya that he will kill Virat. Agastya stops Yug and asks him to cool down. He tells Yug that they can’t kill everyone as they aren’t murderers. Agastya also tells Yug that they will need to get Virat transferred to another city. At the hospital, the nurse feels guilty thinking that she can’t help Ishaan because of Agastya’s camera that is keeping a watch on her. Suddenly, Virat comes to Ishaan’s ward with Pandey. Nurse gets scared seeing Virat.

Virat asks the nurse why she didn’t inform them that Ishaan has gained consciousness. Nurse tells Virat that Ishaan has just opened his eyes but he can’t think or understand anything. In his thoughts, Ishaan requests the nurse to stop lying as he wants to know where Pakhi is and in what condition. In his thoughts only, Ishaan tells Virat that he is fully conscious. Virat asks the nurse if this is Agastya’s own hospital. Nurse says, yes Agastya runs this hospital to help hospital staff, poor and needy people get treated. Ishaan feels angry and disgusted hearing this. When Virat notices him, he tries to show him the camera keeping a watch in his ward. Nurse gets scared seeing Ishaan trying to hint to Virat about the hidden camera.

Virat says Ishaan wants to say something. Nurse tells Virat that Ishaan’s brain isn’t in his control and can’t say anything. Virat asks the nurse what medicine they are putting in Ishaan’s IV. Nurse says saline as Ishaan can eat or drink anything till now. In his thoughts, Ishaan requests Virat to help him as he is being given medicine to paralyze him. Virat asks the nurse to always inform him about Ishaan’s all health updates. Ishaan’s little hope leaves with Virat. At Raichand house, Agastya gets worried seeing Pakhi’s hand burnt. He gets angry and aggressive at the servant and asks him to call the ambulance right now. Pakhi gets shocked seeing Agastya’s aggressive behavior.

She asks Agastya to not get so worried as it’s a small burn. Worried, Agastya tells Pakhi that burns give a dying pain to the person. Neelima comes there and asks what happened. After knowing the actual matter, Neelima tries to calm Agastya. She slowly calms Agastya and makes him believe that she will not let anything happen to Pakhi. Agastya asks Pakhi to go with Neelima. Shocked, Pakhi goes with Neelima. She asks Neelima why Agastya got so hyper. Pakhi says she never saw Agastya behaving like this. Neelima applies medicine to Pakhi. She tells her that Agastya loves her a lot and thus gets worried for her. Pakhi tells Neelima that Agastya was talking like he knows the pain of burning and has suffered a similar incident in the past.

After talking to Ishaan’s father and seeing the situation, Virat’s doubts get deeper on Agastya. He says he has 24*7 surveillance on Agastya and he won’t be able to save himself from him. Virat gets an idea or way to reach the truth. At Raichand house, Agastya and Neelima praise Pakhi’s cooking. Agastya teasingly tells that he can get to know from his sources if she has ordered food from outside or not. Pakhi tells Agastya that he looks so confident like he has been keeping a watch on her for years. Her words shocks Agastya. Agastya’s aunt looks at the food made by Pakhi and tells her that they don’t eat such oily and unhealthy food. She says she knows that middle class people eat oily and unhealthy food.

Naveli gets angry and leaves. Pakhi tells Agastya that he scolded Pakhi for nothing. Later, Pakhi takes pasta for Naveli in her room. She tells Naveli that Neelima told her about her favorite food and thus she ordered pasta for her. Pakhi asks Naveli to eat pasta as a person should not remain empty stomach. Naveli angrily says she isn’t empty stomach as she got scolded by Agastya. She blames Pakhi for making her get scolded by Pakhi. Naveli tells Pakhi that she doesn’t know why Agastya is so obsessed with her. She also tells Pakhi that she got scolded two times in her life by Agastya and that too because of her. Pakhi tells Naveli that her entrance into Agastya’s life won’t change her relationship with Agastya.

She tells Naveli that she will talk to Agastya to spend more time with her than her. Naveli angrily requests Pakhi to not act sweet in front of her. At the hospital, Ishaan’s nurse gets scared seeing Virat inside the hospital at night. Virat asks the nurse who she is getting so scared of. Nurse receives a call from but Virat doesn’t let her. He takes her to the police station for questioning. At Raichand house, Agastya is seen talking to his business partners. He worries, seeing Pakhi’s burn. Pakhi tells Agastya that she is fine. She also tells Agastya that he shouldn’t have scolded Naveli so badly. Agastya tells Pakhi that he won’t tolerate anyone talking to her rudely.

He also tells Pakhi that he will apologize to Naveli and get her a gift if she wants it. Pakhi asks Agastya to talk to Naveli politely. Agastya helps Pakhi in taking out her earrings. This turns into a romantic moment between Pakhi and Agastya. Agastya makes Pakhi comfortable from awkward feelings. Pakhi gets awkward again and leaves. Agastya feels happy.

Reviewed Rating for Fanaa 8th March 2022 Written Update Romance begins: 3/5 This rating is solely based on the opinion of the writer. You may post your own take on the show in the comment section below.