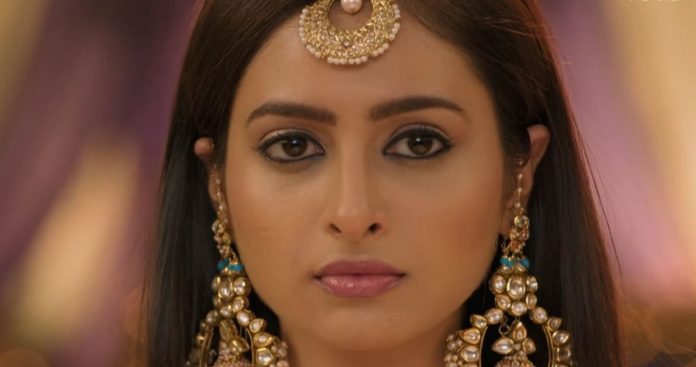 Yeh Rishta 8th March 2022 Written Update Aarohi shocker Abhimanyu is seen trying to talk to Akahara on call but she keeps saying, “hm hm….”. Abhimanyu tells Akshara that he will give her an answer to this tomorrow. Akshara laughs and disconnects the call. Aarohi is seen helping Akshara in her face pack and hair. Akshara asks Aarohi if her dress and earrings work will go fine. Aarohi asks Akshara to not worry as everything would go fine. Akshara tells Aarohi that she is feeling like dancing in her own Tilak. She asks Aarohi to go and practice. Aarohi tells Akshara that she will practice.

Akshara tells Aarohi that it’s not a bad idea. Aarohi tells Akshara that she is very filmy. Akshara tells Aarohi that marriage happens once and she wants her marriage to be memorable for everyone. Aarohi tells Akshara that she will drive her crazy. She asks Akshara to chill as her marriage will really be memorable. Akahara says she hopes the same. At Birla house, Harshvardhan tries to ignore Manjiri. Manjiri requests Harshvardhan to get convinced as it’s their son’s Tilak Ceremony. Harshvardhan angrily tells Manjiri that he knows what is tomorrow and she doesn’t need to remind him. Manjiri asks Harshvardhan how she will go without him.

Harshvardhan doesn’t get convinced and leaves angrily. Manjiri feels stuck between her son and husband. Next morning, Shefali asks Parth how she is looking. Parth gets romantic with Shefali. Abhimanyu comes downstairs fully ready for his and Akshara’s Tilak Ceremony. Anand tells everyone that Mahima has gone for an important surgery and will join them at Goenka Mansion. Shefali says today she will ward off the evil eye from Abhimanyu. She starts with this process. Harshvardhan secretly wards off the evil eye from Abhimanyu. He thinks he also wanted to be a part of his son’s Tilak Ceremony, if Akshara wouldn’t have separated Abhimanyu and him.

Abhimanyu touches Harshvardhan’s feet. Harshvardhan blesses Abhimanyu. Abhimanyu recalls Akshara’s words to make her feel his home and family safe for her, so that she can get everyone’s respect and love at Birla house and could handle relationships there. He requests Harshvardhan to be a part of his Tilak Ceremony. Harshvardhan congratulates Abhimanyu for his Tilak without his father. His words shock everyone. Anand thinks Harshvardhan’s ego makes himself as well as others sad. Abhimanyu says fine and asks everyone to come. Abhimanyu calls Manjiri to come with him. At Goenka house, Akshara throws away the dryer seeing the sparks coming out of it. She feels it’s a bad sign and something wrong is going to happen.

Manjiri explains to Abhimanyu the importance of her child for a mother. She says a wife’s happiness is in her husband’s happiness as well as his respect. She tells Abhimanyu that she can’t attend his Tilak without Harshvardhan (Abhimanyu’s father). Abhimanyu tells Manjiri that he can’t go without her. Angry Abhimanyu cancels his Tilak Ceremony. He asks Anand to call and inform Goenkas about it. Abhimanyu says he will himself call Akshara and apologize to her. At Goenka Mansion, Akshara tells Aarohi that she messed up with her eyebrows. Aarohi tells Akshara that her eyebrows are fine and she is just getting nervous. Suhasini and Swarna come and tell Akshara that Aarohi has shaped her eyebrows well.

They tell Akshara that she is just getting nervous like every bride. Suhasini explains to Akshara that every girl starts feeling nervous since her wedding’s first ceremony/ritual. She tells Akshara that every girl gets nervous and scared of leaving her maternal home and recalls her old memories. Swarna asks Akshara to live these moments and don’t feel nervous. The men of the Goenka family arrive and everyone starts teasing Akshara. Aarohi feels jealous again. Akshara says she hasn’t got ready and Tilak’s ceremony’s muhurat is near. Manish says today the men of the Goenka family will get Akshara ready in showroom condition.

He says he feels that everything will go fine, if this day will go fine. Swarna, Suhasini and Aarohi leave Akshara to men of the Goenka family. Akshara shows tantrums in her pink lipstick color. She scolds Vansh and Kairav for applying two different color nail paints on her feet. Manish asks Akshara to not take stress as it’s not her anklet making wear ceremony but Tilak. Everyone teases Akshara and makes her angry. Akshara starts doing her makeup on her own. She signs everyone to remain quiet. Akshara completes her makeup and jewelry. Everyone gets happy seeing her happy. Akshara twirls all decked up. All men ward off evil eyes from Akshara. Manish applies Kaala Teeka behind Akshara’s ears.

At Birla house, Harshvardhan thinks about what to do as there are already many problems between him and Abhimanyu. He talks to himself saying that he loves Abhimanyu but can’t attend his Tilak Ceremony. Manjiri overhears Harshvardhan’s words. Goenkas wonders why Birlas haven’t arrived till now. Only Anand and Parth come out of the car and walk to Goenkas. Everyone gets scared seeing only two people from Birla family. Manish asks Parth and Anand about Abhimanyu’s whereabouts. Parth makes Goenkas angry by telling them that Abhimanyu didn’t come. Suddenly, Neil is seen coming with Manjiri, Shefali, Anisha and Shefali in a decorated car (jeep).

Abhimanyu comes from behind Anisha and Shefali. This makes everyone relaxed and happy. Akshara hides behind Aarohi as Abhimanyu watches her with love. In the next episode, Suhasini will be seen performing Abhimanyu’s aarti. She will say that she is very happy that she is going to witness her great granddaughter’s marriage. Aarohi will stop Abhimanyu from entering inside. Abhimanyu will ask Aarohi what it is. Aarohi will tell Abhimanyu that she won’t let him come inside and won’t let him attend the function too. Aarohi’s words and actions will irritate, anger and scare everyone.

Reviewed Rating for Yeh Rishta 8th March 2022 Written Update Aarohi shocker: 3/5 This rating is solely based on the opinion of the writer. You may post your own take on the show in the comment section below.