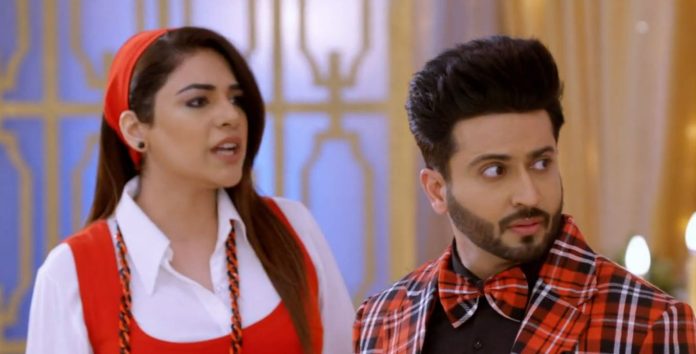 Kundali Bhagya 10th March 2022 Written Update Good News Prithvi hides an unconscious Preeta in the room. Sherlyn sees his tensed expressions and thinks something wrong has happen. She has no idea about it. Prithvi sees Karan and smiles. Karan asks him the reason for the sudden smile. Prithvi tells that he remembered a joke. Karan asks him to keep smiling. Karan looks for Preeta. Prithvi tells Sherlyn that he has attacked Preeta. Karan rebukes Prithvi for a disgusting act. Prithvi asks what did he do. Karan takes him to the room and confronts him, by showing the broken family photo frame. Prithvi denies it. Sherlyn sees Preeta hidden there. Prithvi tells that he can never do this, its his family too.

Karan asks Sherlyn if she was following him. Prithvi doesn’t want Karan to see Preeta. She tells Karan that she is just trying to help him. Prithvi takes a knife to stab Karan, if he sees Preeta there. Sherlyn engages Karan in her talks. Karan asks her not to worry, he will find Preeta. He leaves. Sherlyn shuts the door. She tells Prithvi that he created a big problem for them. She asks him to do something. He doesn’t know if Preeta is dead or alive. She tells that he has to save himself first. She asks him to check Preeta, while she goes out and keeps him away from everyone’s sight.

Preeta is still alive. Prithvi checks her and regrets that she is still alive. He still has an option to kill her. Shrishti meets Karan, and gives the good news to him. She tells that the judge wants to announce Mahesh as a mentally stable man. He is glad. He tells that he didn’t find Preeta anywhere. He doesn’t know where did she go. She tells that Sherlyn told about Preeta’s dance act part to disappear. Sherlyn tells that she isn’t finding Preeta anywhere. Karan asks them to find her. Sherlyn stops Shrishti from checking the room. Shrishti doesn’t listen to her. She also gets attacked by someone.

Prithvi thinks he can still kill Preeta. He had asked her not to become a trouble for him. He doesn’t want to kill her and get his future at stake. He wants to keep a good impression on the family. He can’t even leave her alive to go out and tell his truth. He thinks to call his men and let them decide whether to spare her life or kill her. He calls a goon and asks him to take away Preeta from the house. Preeta gets conscious. She picks the knife. She hears Prithvi conspiring her kidnapping. She threatens to attack her. He lies to her that he was talking to a doctor to get aid for her. She tells that he is lying, because he can never change. He asks her to listen to him once.

He tells that he didn’t make her fall unconscious, he was really talking to the doctor. He asks her to keep the battle to themselves and not tell anyone. She asks him not to worry for that. She tells that she will not leave him, he is already scared of her, he is a coward, her voice and courage has shaken him, so he had attacked behind her back. She asks him to be a man and attack her on her face, then he will see her strength. He accepts it. He asks her to do whatever she wants. She tells that nobody can stop her. She angrily slaps him and makes a leave from the room. Prithvi goes more mad in rage. On the other hand, Natasha and Sherlyn drag an unconscious Shrishti to the room.

Sherlyn thanks Natasha for the help. She recalls seeking Natasha’s help in handling Shrishti. Natasha asks Sherlyn who is leading the game. Sherlyn tells that whoever plays the game, its Sherlyn who decides everything. She asks Natasha to hide Shrishti somewhere. She promises to give money to her. Natasha spoils her mood by saying that Sherlyn might not win over Preeta. Sherlyn asks her to chant Preeta’s name. She tells that a dangerous game is about to begin. She makes a leave. Natasha shuts the door. She thinks of some way to hide Shrishti. Sherlyn wants to support Prithvi and win again.

She finds Preeta going towards the party hall. She wonders how did Preeta gain consciousness so soon. Karan gets a big relief when he sees Preeta back and fine. He asks Preeta where did she go. She asks him if he cares for her. He tells that he was really tensed, next time she should tell him before going somewhere. He asks her to listen to him sometime. She tells that she felt that she will never be able to see him or meet him again. He asks her to stop feeling such senseless things. They get into a cute banter. He tells that he is written in her Kundali, he will never leave her. He tells that their couple dance is still due. Preeta holds his hand to stop him. He asks the reason for drawing him close. She tells that she doesn’t want to make him away, because she just experienced the fear of getting away from him. He asks her if she is romancing him. She tells that he can think so, because she really wants to romance him. She asks him for dance. The couple sets the floor on fire by their romantic dance performance. Karan has to give her Mahesh’s good news and celebrate the joy together. Stay tuned.

Reviewed Rating for Kundali Bhagya 10th March 2022 Written Update Good News: 5/5 This rating is solely based on the opinion of the writer. You may post your own take on the show in the comment section below.