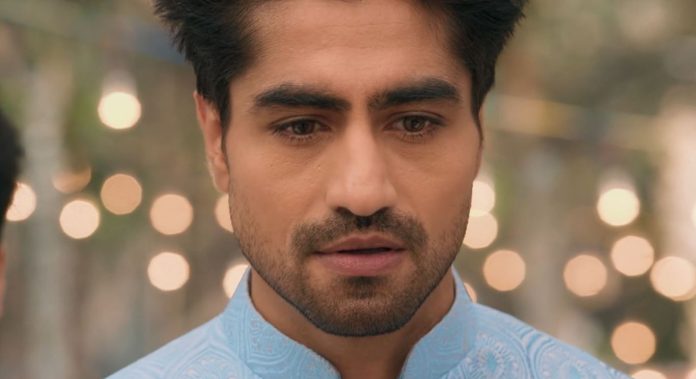 Anand tells Goenkas that Harshvardhan got stuck in some important work. Manish replies to Anand that he can understand. Manish jokes with Abhimanyu. Abhimanyu also jokes with Manish in return. Goenkas takes Birlas inside. Suhasini starts performing Abhimanyu’s aarti. She says she is very happy that she will get to witness her Great granddaughter’s marriage. Abhimanyu asks Suashini to come and meet Akshara whenever she wishes to after marriage. He tells Suhasini that he will do her check-up everytime so that she would remain healthy to attend many more marriages. Aarohi stops Abhimanyu and Birlas at the door and blocks their way. Abhimanyu asks Aarohi what is this.

Aarohi tells Abhimanyu that she won’t let him enter her home and let the function happen. Aarohi’s behavior and words will shock everyone. Suhasini laughs and tells Abhimanyu that Aarohi is performing a sister-in-law ritual. Everyone relaxes and laughs hearing this. Abhimanyu asks Aarohi what he will need to do for entering Goenka house. Aarohi brings a “pataasha thaal”. She shows the pataasha’s to Abhimanyu and immediately hides them with a cloth. After this Aarohi tells Abhimanyu that he would have to tell the number of pataasha’s kept in the thaal. Neil says this is not possible and isn’t any ritual. Aarohi and Goenkas that this is a ritual. She asks Neil to stay out of this as it’s a ritual for Abhimanyu, not him.

Abhimanyu tells Suhashini that this ritual of theirs is tough. Aarohi asks Abhimanyu to either answer her question or accept his defeat, otherwise he will not be allowed to enter Goenka house. Abhimanyu turns and starts walking back. Everyone calls Abhimanyu a coward and a cheater. Abhimanyu turns again and jumps inside, escaping everyone. Aarohi feels bad for failing to stop Abhimanyu. Manish says his son-in-law is smart and active. Birlas move inside. Anand tells Manish that he found their way of welcoming Birlas amazing. Manish folds his hands and tells Anand they also felt happy hearing that they found their welcome good. Abhimanyu tells Manish that he will scold him if he will fold his hands again. Kairav and Anisha praise each other’s looks.

In a low voice, Suhasini tells Swarna to see that Anisha didn’t touch their feet even today. Swarna asks Suhasini to leave this matter as respect should be in a person’s heart. She says Anisha is Kairav’s choice and would be a nice girl for sure. Manish tells Manjiri that he understands her problem as Harshvardhan is an adamant and egoistic person. From a distance, Akshara sees Manjiri crying Harshvardhan’s absence. She understands that Manjiri is not able to be happy in the happiness of her son’s marriage, because of her husband’s absence. Akshara wonders how to fix everything. She thinks of calling and convincing Harshvardhan. Harshvardhan doesn’t pick up Akshara’s call.

Akshara’s outfit sleeve gets torn. Abhimanyu watches Akshara running away from his sight. He yearns to see Akshara. Neil tells Abhimanyu that he is going mad in Akshara’s love. He intentionally drops water on Abhimanyu’s outfit. Neil apologizes to Abhimanyu and says he by mistake dropped juice on his clothes. Abhimanyu asks Neil if he is drunk as he is calling water as juice. Neil asks Abhimanyu if he really did MBBS or if Anand got him pass by giving a donation. In a low voice, Neil tells Abhimanyu that it’s his plan to make him meet Akshara. Abhimanyu follows Neil’s plan and walks upstairs to clean the stain on his cloth. Aarohi goes to stop Abhimanyu but Neil stops her in her way towards Abhimanyu.

He keeps Aarohi busy in a funny argument. Aarohi leaves calling Neil insolent. Abhimanyu enters Akshara’s room and gets numb seeing Akshara all decked up. He says, “Oye Hoye” seeing Akshara. Akshara turns to see Abhimanyu. “Aankhon Ki Gustakhiyan” plays in the background. Abhimanyu looks at Akshara lovingly from bottom to top. Akshara feels shy seeing Abhimanyu coming towards her. Abhimanyu compares Akshara’s beauty with the moon. Akshara smiles and gets more shy. She takes Abhimanyu’s help to stitch the torn part of her outfit. Abhimanyu starts stitching the torn part of Akshara’s outfit. Akshara asks Abhimanyu if he knows stitching. Abhimanyu reminds Akshara that her to-be husband is a surgeon and applies stitches in OT.

Akshara moves towards Abhimanyu and leaves, teasing him. Abhimanyu thinks he will surely take his fees. In the next episode, everyone hopes that everything goes fine, Suhasini will shock everyone saying that they have to tie Kalawa on the groom’s father’s hand according to the ritual. Harshvardhan will see a woman and ask her what she is doing at Birla house. He will ask her to go where she should be. At Goenka house, Suhasini will ask Aarohi, Vansh and Kairav to bring Akshara downstairs. Akshara will be seen returning to Goenka house from outside. She will grab everyone’s attention towards her. Everyone will get shocked and worried seeing tears in Akshara’s eyes.

Reviewed Rating for Yeh Rishta 9th March 2022 Written Update Abhi tricky entry: 5/5 This rating is solely based on the opinion of the writer. You may post your own take on the show in the comment section below.