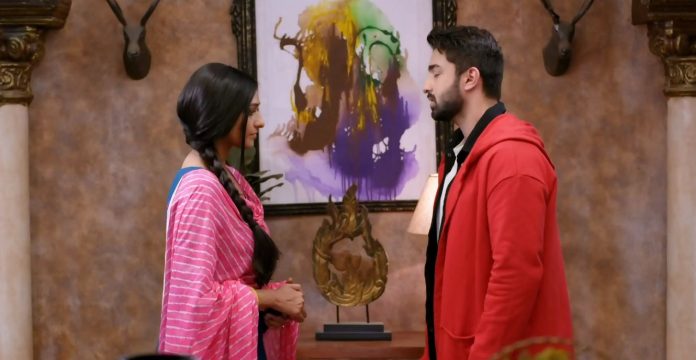 Bhagya Lakshmi 11th March 2022 Written Update Rishi confession Balwinder asks his aide to remove the fuse. The light goes off. He attempts to kidnap Shalu in the darkness. He gets mistaken and kidnaps Neha by mistake. He doesn’t see Neha who just comes and stands before Shalu. Shalu doesn’t realize that someone just dragged Neha behind. Lakshmi and her sisters stay safe. Balwinder and Rano’s plan back fire. Malishka blocks Rishi’s number from Lakshmi’s phone. Lakshmi doesn’t know that Malishka and Neha are after her phone for their own motives. The kidnapping confusion will get revealed. Rishi confesses his feelings to Lakshmi.

He tells her that he doesn’t know what’s happening, he just see her everywhere. Lakshmi doesn’t want to expect his love. Rishi reminds her words, that whatever was written in the card was her feelings for him, but after getting shot, he felt the same feelings. They get into a moment. Karishma and Kiran come there and find Rishi close to Lakshmi in the darkness. Rishi wants to tell Lakshmi that he has started liking her even more. He doesn’t let Lakshmi go away. Lakshmi finds Bani tensed and asks the reason. Bani tells that she isn’t able to find Shalu anywhere. Shalu returns to them, while Neha goes missing because of the kidnapping twist.

Earlier in the show, Shalu tells that Karishma, Sonia and Malishka dislike Lakshmi, and they have invited her. Neha also joins them for dinner. She tells that she has come because she is also Lakshmi’s sister. She has come there just to save Rano. She looks for Lakshmi. Bani tells that Lakshmi has gone to clean her dress. Neha thinks something is going on against Lakshmi. Malishka and Sonia block Rishi and Lakshmi’s numbers in both their phones.

Malishka asks Sonia to return Rishi’s phone. She wants to take Lakshmi’s phone. Sonia asks Malishka to check Lakshmi’s phone for messages to find out if there is any secret. Malishka tells that she doesn’t want to check the phone. Sonia insists her. Balwinder enters the house. Malishka thinks to check the phone messages and find out the truth. Balwinder drops a vase to distract her. She doesn’t check Rano’s message. Sonia keeps Rishi’s phone in his room. She tries to leave and slips.

She asks Rishi to come for dinner. Rishi gets Ayush’s call. Ayush asks for his help. Rishi asks him to handle things himself. He doesn’t know what’s happening, its because of Lakshmi. Ayush asks did he meet Lakshmi. Rishi tells that Lakshmi has come home, he invited her for dinner on Malishka’s saying. He adds that Malishka wanted to thank Lakshmi. He feels tensed that he shouldn’t feel for Lakshmi, but he is still feeling for her, he is imagining her everywhere. He shares his feelings with Ayush.

Lakshmi looks for her phone. Bani tells that maybe Sonia and Lakshmi’s phones got exchanged. Lakshmi goes to Sonia to get her phone. Neha wants to delete the message by finding Lakshmi’s phone. Rishi tells Ayush that Malishka came to him, but he saw Lakshmi in front of him. Ayush tells that nobody can help Rishi. Rishi asks him to find a solution. Sonia asks Malishka to give Lakshmi’s phone fast. Malishka drops the phone, which gets picked by Balwinder. He deleted Rano’s message. Ayush advises Rishi to go and tell the feelings to Lakshmi. Rishi takes his advice. He thinks of talking to Lakshmi before the dinner starts. Ayush is happy seeing their love story forming.

Balwinder asks his friend to remove the fuse when he calls him, then he will kidnap Shalu and take her to the car. Sonia returns the phone to Lakshmi. She asks Lakshmi to come for dinner. Neha wants to take the phone once. Rishi meets Lakshmi for a talk. Neha takes Lakshmi’s phone by an excuse. She checks the messages. She doesn’t find Rano’s message. She calls Rano and informs her that there is no such message that can put her into trouble. Neha asks Rano to check her phone. Rishi asks Lakshmi why did she not come to meet her. Neha tells that she has to go home urgently. She thanks Rishi for inviting her. Rishi tells that Neha was self-invited. Lakshmi tells him that she had come to see him.

Rishi yearns for Lakshmi, and battles with his confused feelings. He stops himself from holding her hand. He shares his feelings with her. She asks him what is he going through. He tells that he is imagining things. She asks what is he visualizing. He tells that he is mentally fine, but he is seeing her everywhere. She is stunned by his innocent confession. Malishka asks Neha to not leave without having the food. Neha doesn’t want to miss the good food. Balwinder keeps an eye on Shalu. He prepares to kidnap her. Balwinder finishes his kidnapping task.

Rishi tells Lakshmi that anyone will fix the fuse, its not important. He wants Lakshmi to listen to him first. He asks her not to get confused. He reminds her the card text. She tells that she remembers that card was for Malishka. Rishi hides Lakshmi from Malishka. He apologizes to her. Rishi tells Lakshmi that timing is important to crack a deal. She asks him what does he mean to say. He tells that she didn’t come to see him, like she doesn’t care. She also thought the same.

Reviewed Rating for Bhagya Lakshmi 11th March 2022 Written Update Rishi confession: 5/5 This rating is solely based on the opinion of the writer. You may post your own take on the show in the comment section below.