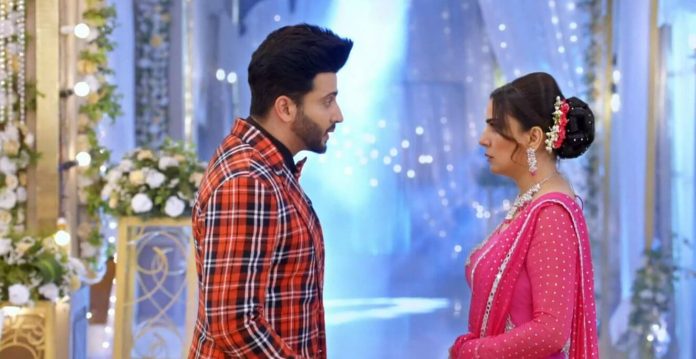 Kundali Bhagya 11th March 2022 Written Update Preeta reveals truth Preeta and Karan have a moment. Sameer finds Shrishti missing from the party. he looks for Shrishti. Karan comes close to Preeta when he gets her consent. Rakhi prays that they both always stay together in their Kundalis. She wishes their happiness. Sherlyn finds Prithvi shaken and asks the reason. She asks him what is happening, how did Preeta go out. He tells that Preeta has run away to tell his truth to the family. He asks her to run away if she wants to save herself. She asks him why did he let Peeeta run. He tells that he wasn’t letting her escape, but the situation got out of control.

He narrates how he attacked Preeta and still she escaped. She blames him for feeling for Preeta again and sparing her life. He asks her is she out of her mind. She asks him why didn’t he kill Preeta. She tells that his mind beats for Preeta again. He warns her to stop the nonsense. She tells that he has lost to Preeta once again. He angrily holds her neck. He asks her not to challenge him. He tells that she is angering him even more by such nonsense.

He adds that he just loves her. She struggles to get free from his grasp. She faints down, and he doesn’t notice it before. He is shocked to see her unconscious. He tells her that he just loves her, she has to believe him once. Sameer enters the room to find Shrishti. Natasha quickly hides inside the cupboard. He suspects that someone is hiding inside the cupboard. Natasha fears of getting caught. Natasha acts in front of Sameer, and assists him in rescuing Shrishti. She doesn’t want Luthras to know her truth and kick her out of the house. Will Preeta reveal Prithvi’s truth to the family? Keep reading.

Sameer finds Natasha and Shrishti unconscious. He gets worried. He tries to bring them to senses. Natasha fakes it. Shrishti gets conscious when he helps her. He asks her to have water. Shrishti asks Natasha who has done this with them.Natasha tells that she doesn’t remember anything. She tells them that someone had hit on her head. Shrishti tells that the exact thing happened with her also. Sameer takes Shrishti with him, while Natasha runs to meet Prithvi and Sherlyn. Prithvi asks Sherlyn to listen to him once. He gets her to consciousness. He asks her if she is okay. She gets angry on him that he tried to kill her. He apologizes for his rudeness and rage. She tells that she will forgive him the day he wins over Preeta. She tells him that the Prithvi she loved never lost to anyone. He promises to never lose. He tells that he will defeat Preeta. She asks him to make Preeta out of their lives forever. He gets revengeful against Preeta.

Shrishti is relieved to find Preeta fine. Sameer asks her what happened with her. She tells that she has no clue. She asks him to not tell Preeta about it. Shrishti asks Sameer not to talk to her, they aren’t friends now. Sameer wants to befriend her again. Prithvi returns in the party. He executes his plan. Karan and Preeta take Mahesh and Rakhi for dance. Mahesh enjoys his dance with Rakhi. Prithvi finds everyone normal. He thinks Preeta did not tell anyone about his truth. He welcomes the doctor in the party. He goes to dance with Kritika. Sherlyn thinks Prithvi is dancing despite the big problem. Prithvi spikes Mahesh’s drink. Mahesh hallucinates. He sees a snake wrapped around Rakhi’s neck.

He gets scared and tries to make the snake away. He catches her hair and shouts that he will kill the snake. The family is shocked when he troubles Rakhi and behaves insane. Rakhi breaks down, while Mahesh is taken away by Karan and Prithvi. Preeta cries seeing the unexpected thing. Karan asks Rakhi is she okay. Judge declares that Mahesh is still insane, he will not declare him normal. He tells that Mahesh’s condition is still the same.

He suggests them not to bring Mahesh in between the family, and treat him like a mental patient. Prithvi asks Rakhi is she okay. He tells that Mahesh isn’t okay, it was difficult to handle him, doctor had come on the right time and handled him. Doctor asks them not to dream such things, Mahesh isn’t normal and will need time. The judge and Doctor ask Karan not to act irresponsible and take care of his dad. Preeta apologizes to them. She tells that it was her idea to keep the birthday party. Rakhi tells that she had requested Preeta, its her mistake to bring Mahesh in the crowd. Karan gets upset.

Reviewed Rating for Kundali Bhagya 11th March 2022 Written Update Preeta reveals truth: 3/5 This rating is solely based on the opinion of the writer. You may post your own take on the show in the comment section below.