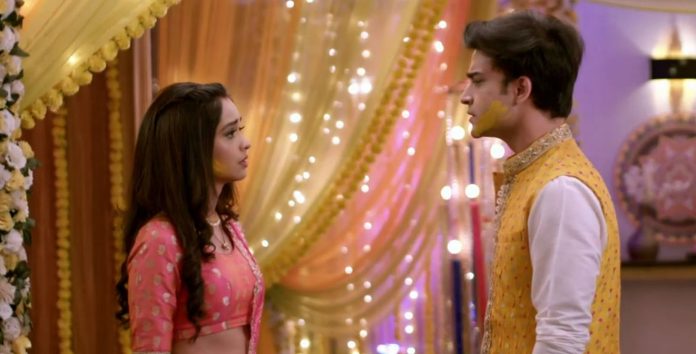 Kumkum Bhagya 15th March 2022 Written Update Tough call Ranbir gets saddened recalling Prachi’s words. Rishi comes to help him with an advice. Ranbir tells that he got stuck in a bad situation. Rishi asks her the problem. Ranbir tells that he will tell the long story some other day. Rishi asks him to share it. He knows about Prachi and Rhea. He tells that people have news about Ranbir Kohli’s life. He can see that Ranbir is married to Rhea, but he is eyeing Prachi. Ranbir tells that he loves Prachi, she is his wife. He admits that he slept with Rhea in intoxicated state, he doesn’t remember anything, when he woke up, he saw Prachi in front with tears in his eyes. He wants to talk to Prachi and convince her.

He was very happy in that phase. He tells that a third person spoils a happy marriage. He admits that he has everything now, money and power, but not Prachi and her happiness. He feels he isn’t happy on seeing Prachi away from him. Ranbir asks Rishi to just remember his advice and not marry Malishka. He knows the bad feeling of regret. He tells that Rishi still has the chance in his hands. Ayush tells that love is beautiful and hurtful also. Ranbir tells that it’s a tough thing to attain love. He tells that Rishi loves Lakshmi, he would feel the best when he spends time with her. He asks Rishi to accept his feelings. Ayush loves his advice. Malishka interrupts them.

She tells that his friends are cowards, they will not support him. She tells that she will help him if he can help her in her plan. She is ready to assist him in kidnapping Lakshmi. Balwinder realizes that she changed the side. He asks what help does he want. She asks him to apply colour to Prachi. He asks if this any big thing. She tells that nobody should see him doing this, nobody will pay attention to him, but everyone will see her if she goes to Prachi. He asks her who is Prachi. She shows Prachi’s picture to him. She asks Balwinder if he will do her work or not.

She tells that he will get her help if he does her work. He agrees to her. He tells that he doesn’t like to do any petty task. She asks him not to jump onto conclusions soon. Rishi asks Malishka why is she angry. She tells that he left their conversation in the middle and left. She wants to talk to him. She asks why does he not convince her when she is angry. He tells that they are guests at someone’s place, they shouldn’t create a scene.

Ayush doesn’t want Rishi to torture himself and Lakshmi. He asks Prachi why all the boys are so stupid, the girls are so smart. She tells that girls are beautiful so that the guys love them. He tells her about Rishi, who is really foolish to not understand his love. He shares the big problem with her. He tells that Rishi and Lakshmi love each other, but Rishi thinks he loves Malishka. He asks what should he do to explain Rishi that he loves Malishka. She tells that if they are destined to be together, and their love is true, then they will get united against all odds. She asks him not to worry. He tells that love is complicated, its easy to love someone but keeping it is tough.

He tells her that Ranbir loves her a lot. He asks her to give Ranbir a chance. She tells that both Ranbir and she have to decide about love. She feels that love gets bitter after a point, and one should stay away from it. Lakshmi joins them in the conversation about love. Prachi feels dizzy. Lakshmi worries for her. Prachi shares her pregnancy news. She tells that she was avoiding colours till now. Lakshmi congratulates her. Prachi asks Lakshmi not to tell anyone. Lakshmi promises her. Balwinder accompanies Rhea to Aaliya’s room. Aaliya asks Rhea what is she doing with such men, they look like goons. Rhea tells that they have come to help them. She tells that Balwinder loves Lakshmi, he got cheated in love, he will now help them in their plan against Prachi. She asks Balwinder to wear the gloves before applying colours to Prachi.

Balwinder refuses to have it. He tells that he won’t have any allergy. Rhea gives him the demo of the dangerous colours that burns the plant. She tells that if he doesn’t wear the gloves, then his hands will also burn. Balwinder takes the dangerous colours packet and leaves. Balwinder finds Prachi attending the guests. He follows her, while Lakshmi also looks for Prachi. Ranbir joins Prachi. Rhea and Aaliya watch the drama. They want to see Prachi in pain. Balwinder talks to Guddu, and tells that he will apply the chemical colours to Prachi, he doesn’t care if it burns her face. Lakshmi hears them talking and learns their plans. She worries for Prachi, whose face will get burnt. She wonders who wants to harm Prachi. She tells that she will not let them reach Prachi.

Ranbir tries to talk to Prachi. He wants Prachi to keep him around. She calls him confused who doesn’t know what he wants. She asks him to go away and spend time with himself. She tells that Ranbir doesn’t want her, but Rhea. She doesn’t want him to anger her more. He doesn’t like to hear this. She asks him not to be selfish and think of her sometimes. She reminds him that he had slept with Rhea. He tells that she is responsible for their relation’s ups and downs. She calls him wrong. She tells that even he is responsible for their life’s sorrow. They accuse each other. He doesn’t want to always get blamed by her. He feels he is the person suffering in his relationship, even more than Prachi.

Balwinder asks Guddu and Bablu to run and pretend to be playing Holi, while he goes after Prachi. Rhea and Aaliya follow Prachi to see the outcome of their plan. Balwinder runs after Prachi for the attack. Rhea tells that she will enjoy the live match. Aaliya tells that they will need to call the ambulance for Prachi. Rhea tells that she will pretend like a caring sister in front of everyone. Lakshmi runs after Balwinder to stop him from harming Prachi’s face. She protects Prachi by attacking Balwinder.

Reviewed Rating for Kumkum Bhagya 15th March 2022 Written Update Tough call: 3/5 This rating is solely based on the opinion of the writer. You may post your own take on the show in the comment section below.