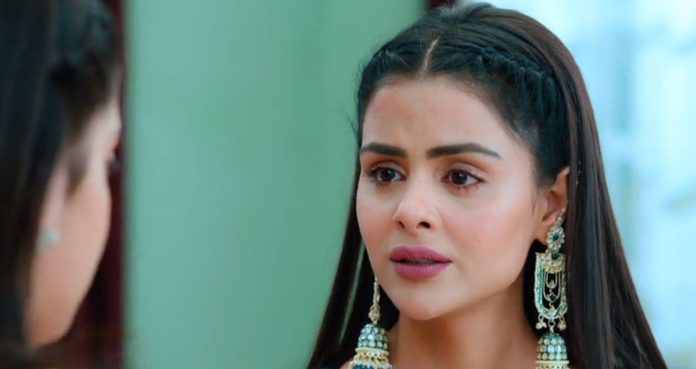 Udaariyaan 14th March 2022 Written Update Good news Tejo and Jasmin suddenly go missing from the house. None of the Virk family knows about the conversation that took place between the sisters. Jasmin had requested Tejo to keep Dara’s secret and not let her lose everyone’s true love which she won after her accident. She promised Tejo that she will do anything it takes to prove that she is stepping towards a reformation. Tejo decides to help Jasmin come back on the right path. She finds it hard to hide the truth from Fateh, but agrees to her pleading sister who really wants to start a new life with Amrik. Tejo knows that Amrik has fallen for Jasmin and deserves happiness.

She asks Jasmin to prove that she is really willing to accept the Virk family. Tejo takes along Jasmin to the lawyer, and makes the papers of the house property. The family grows worried when none of them could find Tejo anywhere. Virks start looking out for Tejo. They plan a birthday surprise for Tejo, just like Sandhus, who expect Tejo to return home after her 7-day challenge. Sandhus also grow worried knowing Tejo isn’t at the Virk house.

Navraj tells Rupy that Tejo and Jasmin are missing since some time, and even the Virks are worriedly looking for them. He tells that Mahi told him that Tejo and Jasmin aren’t at home. Rupy and Satti grow worried. Fateh, Rupy and family members look for Tejo, and get too worried for her safety, because they have no faith on Jasmin. They fear that Jasmin would harm Tejo. Tejo and Jasmin return home with a good news for the Virk family. Tejo tells Khushbeer that Jasmin has decided to return the half share of the house property to Khushbeer, which she took over by unfair means.

She hands over the papers to Khushbeer along with the ownership rights. Khushbeer blesses Tejo for gifting them the lost pride. Tejo requests Khushbeer and family to forgive Jasmin by all their heart and accept her. Khushbeer blesses Jasmin to stay happy, and accepts her positive change. Jasmin apologizes to the family for troubling them so much. She tells that she has understood the family value after getting a new life, all thanks to Tejo. Tejo feels happy to complete her promise and bring peace in the Virk house.

The family awaits Tejo at the Sandhu house. Angad comes home and learns that Tejo didn’t come home till now. Sandhus get worried for her. Tejo ends their wait and comes home. She gets their good wishes. She gets happiness. She wants to tell them about Jasmin. She asks them to wait for her special someone coming. The family guesses that Fateh is coming. Fateh and Buzo look for Tejo and Jasmin everywhere, and don’t find them. Fateh grows too worried. Rupy raises an objection on Fateh’s coming, but Tejo asks for her rights to invite someone special. She surprises them by bringing Jasmin home. The family is shocked to see Jasmin.

Rupy shouts on Tejo and stops her from giving an entry to Jasmin in the house. Jasmin apologizes to Rupy and the family. She wants another chance for herself. She wants to really repent her bad deeds and reform. She tells that she wants to change and seeks the family’s support. Rupy thinks she is just acting and dismisses her appeal. Jasmin and Tejo request the family to forgive Jasmin. The family melts their hearts to get their old Jassu back, while Rupy is adamant. Tejo asks Rupy to forgive Jasmin and love her the same way as he loves her/Tejo. She reminds that Jasmin is also the Sandhu blood, and deserves their love and care. Jasmin pleads with Rupy. Angad watches the family drama.

Rupy sternly refuses to give another chance to Jasmin. Tejo asks him to accept Jasmin. He reminds Tejo about Jasmin’s bad deeds, when she ruined Tejo’s marriage with Fateh. He asks Tejo not to force him, and just take away Jasmin. He doesn’t want to forgive Jasmin, else he can’t forgive himself. Fateh gets informed about Tejo and Jasmin visiting the Sandhus. Tejo asks Rupy and others to remember Jasmin’s childhood and take her back in the family. The family rebukes Jasmin for her actions. None of them want to forgive her. Tejo asks Satti to forgive Jasmin and melt her heart. Satti tells that she loved Jasmin more than Tejo, but Jasmin disappointed them.

Jasmin asks Rupy to not hate her. She accepts her crimes and apologizes. Rupy warns Tejo that one day she will regret a lot for forgiving Jasmin, who nature doesn’t have any possibility of a positive change. He asks her to not forgive Jasmin like the way she had easily forgiven Fateh. Tejo gets upset on hearing Rupy’s words, while Jasmin breaks down seeing his immense hatred. Rupy advises Jasmin to repent her sins and make her surrounding people happy by winning their love and trust. Tejo tells that Jasmin wants the first chance from Sandhus to begin her repentance. Rupy refuses to give any chance to Jasmin and sends her away. Fateh prepares to celebrate Tejo’s birthday. He gets upset when he finds Tejo sharing a moment with Angad in her house.

Reviewed Rating for Udaariyaan 14th March 2022 Written Update Good news: 3/5 This rating is solely based on the opinion of the writer. You may post your own take on the show in the comment section below.