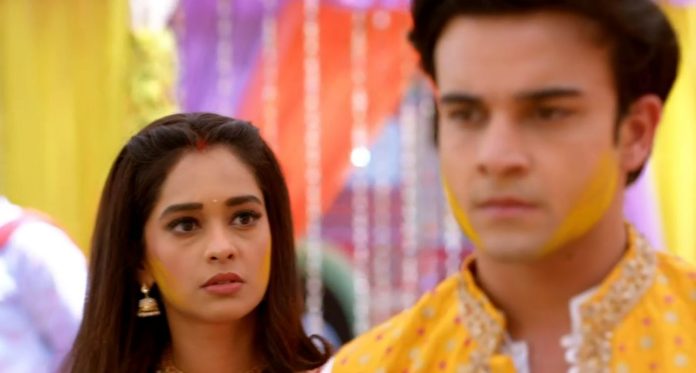 Kumkum Bhagya 16th March 2022 Written Update Ranbir accused Ranbir looks for Prachi. He goes to her room to talk to her. He find Shahana there. He asks her to talk to Prachi once and explain her that he isn’t wrong. He tells that he has become a big enemy for Prachi. She asks him what does he want to say. He tells that he is feeling hurt by hearing Prachi’s words. He doesn’t want Prachi to blame him always. He tells that this way their relation will break. She tells that she isn’t defending Prachi, but he is really wrong. She asks him to look at his behavior. She tells that she used to explain Prachi to patch up, but Ranbir has crossed limits with Rhea. She feels Prachi is right on her front. She apologizes to him.

She wanted true love like Ranbir and Prachi’s love, but now she loses faith in love. She doesn’t want to support him when he is wrong. Ranbir cries in sorrow. She regrets to hurt his heart by giving a straight forward opinion. She doesn’t think she said anything wrong. She comes across Ayush. She asks Ayush if she said anything wrong. He tells that he didn’t hear anything. She tells that it’s the problem with every guy, that guys don’t hear anything and then don’t understand. She asks him not to spoil his mood. Malishka fumes in anger and pushes Shahana who comes in her way. She insults Shahana. Ayush watches their catfight and enjoys. He asks Malishka not to insult Shahana. Shahana asks Malishka to stay well with Lakshmi.

Malishka rebukes her. She argues with Ayush as well. She asks him to keep Lakshmi away from her sight then she will behave nicely with him. Ayush tells that he would have slapped Malishka if she wasn’t a girl. Shanana suggests an idea to bring Malishka on the right path. She tells that she will trouble Malishka now. Malishka feels everyone has gone mad for Lakshmi, like the event is for Lakshmi. Shahana troubles Malishka by blocking her way. Malishka asks Shahana to go back to the chawl from where she had come. She asks Shahana to stay away. Shahana has courage to give her a befitting reply.

Malishka asks Ayush why is he favoring Shahana, like he has got over Shalu. She tells him that she will complain about him to Rishi. Ayush asks her to go and do anything she wants. He finds Shahana saying the truth. He tells Shahana that he doesn’t have any interest in her, because he has someone else in his life. She asks him who is she. Ayush gives her hints to guess the name of the girl.

Lakshmi saves Prachi from Balwinder, who drops the chemical colour on the ground. Lakshmi tells that those goons wanted to harm her, she has to see their face and know their enemies so that she can fight them. She follows Balwinder. Prachi can’t believe it. Balwinder plans to make Lakshmi follow them and then kidnap her. Aaliya comes in front of Lakshmi, until then Rhea takes away Balwinder with her. Lakshmi sees the goons gone. Aaliya tells that she will find Rishi herself. Rhea tells Balwinder that he would have gone caught today. She yells at him that he dropped the colours and got the plan revealed in front of Lakshmi, he has flopped everything and Prachi is still safe.

In reply, he takes her at the point of the knife. He tells her that he will not accept any nonsense. Prachi is shaken up. She tells Shahana that someone had tried to apply chemical colours on her, but Lakshmi saved her. Shahana tells that someone wanted to harm Prachi. Lakshmi apologizes to Prachi that she couldn’t catch the goons. Shahana tells that Rhea and Aaliya would have planned that. She runs to teach them a lesson. Lakshmi comes across Malishka, who taunts her and goes. Prachi stops Shahana. Lakshmi tells Shahana that she can’t prove anyone wrong just on the basis of the gut feeling, she will need an evidence. Prachi hugs Lakshmi and thanks her. Malishka gets angered that everyone likes Lakshmi.

Shahana tells Prachi that she has to check the house for the enemies. She tells Lakshmi how Rhea has become Prachi’s enemy. Prachi asks Shahana to stop it. Shahana doesn’t want to shut her voice. She tells that Rhea has married Ranbir and troubled Prachi a lot. Lakshmi feels sorry knowing Prachi’s own sister has hurt her so much. She pities Prachi and hugs her. She asks Prachi to stay strong. She cherishes the bond between sisters. She tells her about Shalu and Bani, who can never think of doing bad with her. She recalls her parents and cries. Prachi hugs to console Lakshmi. Rishi comes there and finds Lakshmi crying. He feels sorry. He wipes her tears. He doesn’t want her to cry.

He tells that he was just looking for Ranbir’s room to use the washroom. Shahana guides him. She asks Lakshmi to save Rishi’s life from ruining, because Rishi doesn’t love Malishka. Prachi tells Lakshmi that everyone can see Rishi’s love for Lakshmi. She asks Lakshmi to know that Rishi just loves her. Lakshmi tells that Rishi admits it that he loves only Malishka. She can’t believe his feelings over his words. She asks Shahana what will she do against Rhea if she is permitted. Shahana tells that Prachi loves Rhea and won’t let her do anything to Rhea.

She adds that Aaliya is worse than Rhea. Balwinder tells Aaliya that he will kill her if she doesn’t apologize. Rhea and Aaliya apologize to Balwinder. He tells Aaliya that his mood is good because he met Lakshmi, he is going to take Lakshmi and that’s why he is sparing Aaliya’s life. He asks them not to put hurdle in his work. He asks who would help him in finding Lakshmi. Malishka meets them and tells that she would help them in finding Lakshmi.

Reviewed Rating for Kumkum Bhagya 16th March 2022 Written Update Ranbir accused: 4/5 This rating is solely based on the opinion of the writer. You may post your own take on the show in the comment section below.