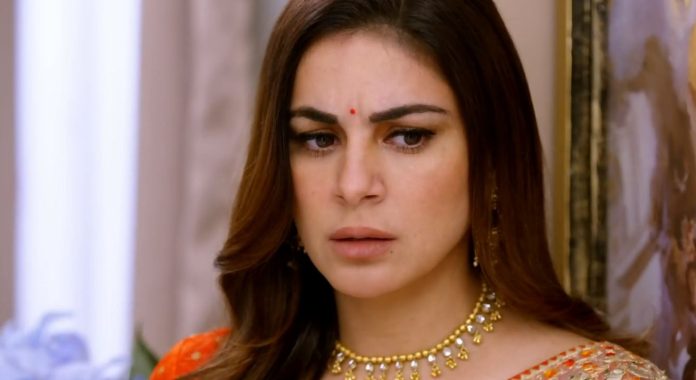 Kundali Bhagya 16th March 2022 Written Update Preeta clued Sherlyn gets cunning and makes a new plan. She goes to meet Prithvi. She tells him that she met a new lawyer and spoke to him. She adds that the lawyer told her that they will write Prithvi’s name by removing Preeta’s name in the legal documents. She tells that they will do the work so cleanly that nobody will know that Preeta’s name was written on the papers first. She asks Prithvi to rely on her plan. Preeta gets to overhear their conversation and the entire plan. She is shocked to know that they are planning a forgery by hiring a new lawyer instead their crime lawyer Naagre.

Preeta thinks to get Karan into her confidence, because she wants someone’s support in the Luthra family. She divulges bits of details about her motives to Karan. She tells him that she wants Mahesh’s betterment at any cost. Karan doesn’t understand what she means to say and do. They get into a cute romantic moment after much of their funny banter. Preeta tells that she will prove her smartness to Prithvi, and prepare a counter plan for his move. How will Preeta prepare herself? Will she take Naagre’s assistance in making her documents testified? Keep reading.

He signs Preeta to watch him. He goes to greet Rakhi and Kareena. He tells that Mahesh’s condition got worse and he landed back in the basement because of Preeta. He adds that the doctor told them to not visit Mahesh and also limit his food. He asks Rakhi not to meet Mahesh in her emotional state, its not allowed, else she may get hurt. Rakhi asks him not to stop her. He tells that he won’t do Preeta’s mistake. He asks Rakhi if she is thinking to hate him for this, and she may find Preeta a nice person for allowing her, but they have seen the result of Preeta’s move. He tells that Kritika and Kareena can go to meet Mahesh, but Rakhi can’t. He tells them that he is being strict for their betterment.

Kareena asks Rakhi not to worry, and agree with Prithvi, he is saying right. She convinces Rakhi for Mahesh’s name. He tells that he will look after Mahesh. Preeta gets angry watching this. She goes after Prithvi to rebuke him. Prithvi finds Sherlyn in his bedroom. He asks her the reason for her smile. She tells that she has a solid reason for her smile, she actually found a solution to get rid of Preeta. He asks her what did she find. She tells that she has found a way to throw Preeta out of the house. Preeta reaches there and eavesdrops.

Sherlyn tells that they have to find the legal papers and then take it to their new lawyer to change Preeta’s name to Prithvi’s name. She tells that they will snatch the rights from Preeta and throw her out of the house. She asks how is the idea. Prithvi calls it nonsense. He tells that her lawyer is a big fool, they can’t get the legal papers from Preeta’s bank locker. He doesn’t want to waste time on her useless idea. Preeta realizes that Prithvi found Sherlyn’s idea crazy. She also gets an idea. She thinks to make the stealing task easy for Prithvi. She decides to bring the papers home and let him steal it, so that she can frame him into the theft and send him to the jail.

She finds a way to get rid of Prithvi and take revenge on him. She goes to execute her plan. She thinks of some way to make Prithvi know about the papers brought home from the bank. She asks Girish to call Prithvi and Sherlyn for breakfast. Karan and Preeta get busy arguing in front of the family. Kareena asks them to have the breakfast silently. Rakhi doesn’t want to have food. She complains of headache. She tells that she wants to take some rest in her room. She takes Preeta’s permission. This upsets Karan and family. Preeta feels bad. She wants to fix everything soon and bring happiness in the family. Prithvi joins them for the breakfast. He knows that Preeta hates him and doesn’t want to see his face, which reminds her of her failure.

She thinks Sherlyn will come after some gap so avoid the doubt. She wants everyone to hear her phone conversation. Sherlyn comes there. Preeta receives the call. She tells that she has important papers in the bank locker, she is in Luthra house because of those papers. She tells that she will come to the bank and get the papers before the repair work begins. She asks the person to get the papers and hand it over only to her, to avoid the risk of misplacement. She passes the information to the family. Prithvi and Sherlyn act to ignore the news. Preeta thinks he will steal the papers and then she will get him arrested for the crime.

Reviewed Rating for Kundali Bhagya 16th March 2022 Written Update Preeta clued: 4/5 This rating is solely based on the opinion of the writer. You may post your own take on the show in the comment section below.