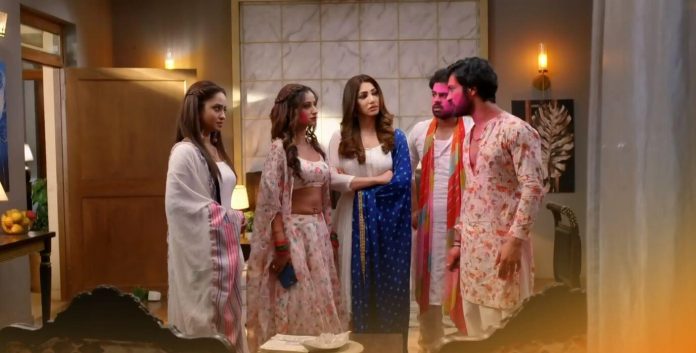 Bhagya Lakshmi 16th March 2022 Written Update New plot Lakshmi intervenes between Rhea and Balwinder’s planning of harming Prachi’s face. Lakshmi saves Prachi when he attempts to throw the colours on the latter’s face. Balwinder gets outraged that Lakshmi failed his plan. He doesn’t get caught. Lakshmi looks for him to know his identity. Malishka learns what Balwinder is upto. Balwinder wants to kidnap Lakshmi. Guddu tells him that Lakshmi is coming towards him and it’s the best chance to kidnap her. Balwinder tells that he will kidnap Lakshmi like Sita had been kidnapped. Malishka also joins Balwinder in his evil plan against Lakshmi. Will Malishka stoop to this level? Will Rishi learn about Malishka and Balwinder’s plan of kidnapping Lakshmi and rescue Lakshmi? Keep reading.

Earlier in the show, Lakshmi tells Rishi that Malishka can’t do anything against him. He tells about their fight. She tells that his perception is different than Malishka’s. She feels Malishka is a nice person, and stays nice towards everyone, except her. She sings praises of Malishka. He asks if he has hurt her a lot. She asks if he wants to hear the truth. He asks her not to say the truth which he can’t tolerate. The guests ask Rishi to come and play holi with them. Rishi feels Lakshmi has a golden heart, he did wrong with her, and she is still good towards him. He regrets his actions. She thinks he has hurt her a lot, but she can’t get angry on him.

Rhea asks Balwinder to admit his love to Lakshmi if his love is true. He tells that she will never come with him, he will force her to come, he will kidnap her. Malishka informs Balwinder that Lakshmi is coming towards the hall. Balwinder asks his friend to stay ready and nab Lakshmi. Lakshmi prays for Prachi’s happiness. Malishka remembers Kiran’s advice. She apologizes to Rishi. Rishi also apologizes to Malishka. They both admit their mistake. She hugs him. Lakshmi spots them. She gets heartbroken seeing them. Rishi feels uncomfortable when he sees Lakshmi outside the door. He asks Malishka to break the hug and leave him. He worries for Lakshmi, who cries and runs away.

Balwinder finds Lakshmi. He tries to catch her, but she escapes. Rishi makes Malishka away. She asks him why is he behaving odd. He asks her to limit herself. She asks him what was she doing, they can kiss each other, they are going to get married. She asks her if they don’t get married for some reason then it won’t be right. He tells that he will stay away from her. Balwinder catches Lakshmi. He tells her that he is Balwinder who loves her a lot. He asks her not to cry for Rishi, he will just make her cry. She angrily slaps him. He forces her to play holi with him. She asks him to leave her. Prachi and Shahana come there and splash water on him to make him away.

Balwinder confesses that he loves Lakshmi and wants to marry her. Lakshmi tells that she is already married to Rishi. He asks her to remove her mangalsutra which is just useless. She slaps him again. He forcibly drags her. Prachi sends Shahana to call Ranbir and Rishi. She hits Balwinder to save Lakshmi. Shahana finds Rishi and tells about Lakshmi who needs help. Rishi runs to save Lakshmi. Ranbir finds Rishi and Shahana running and wonders what’s happening. Rishi asks Balwinder to leave Lakshmi. Balwinder threatens of hurting her. He asks Rishi to stay happy with Malishka, and not interfere in Lakshmi’s life when he doesn’t love Lakshmi. Ranbir arrives there to fight Balwinder. Rishi and Ranbir fight Balwinder and his friends.

Lakshmi tells that someone had asked Balwinder to apply the chemical colour on Prachi’s face. Rishi beats up Balwinder a lot and punishes him for touching Lakshmi. Malishka calls the police to get the situation under control. She asks Rishi to calm down and leave Balwinder. Balwinder asks Malishka to help him flee, else he will tell her name too. Malishka threatens him in front of them. She tells that she didn’t call the police, it was a fake call. She asks him to catch her at knife point and escape. Rhea understands her plan. Balwinder tells Lakshmi that Rishi doesn’t love her, he just used her. Rishi asks him to leave Malishka. Balwinder flees from there.

Reviewed Rating for Bhagya Lakshmi 16th March 2022 Written Update Kidnapping plot: 2/5 After the merger episodes, the kidnapping plot is going to drag for weeks now. This rating is solely based on the opinion of the writer. You may post your own take on the show in the comment section below.