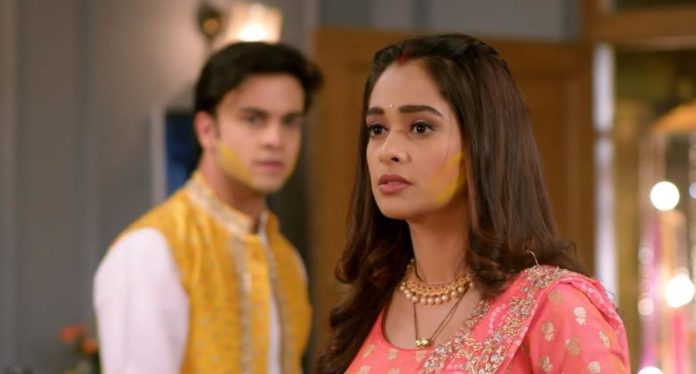 Kumkum Bhagya 18th March 2022 Written Update Broken Pranbir Ranbir finally meets Prachi and wants to talk to her. She refuses to talk to him. He tells Lakshmi that he needs her help, because even Shahana isn’t supporting him this time. Prachi asks him not to drag Lakshmi in their matter. Lakshmi asks Prachi to talk to Ranbir. Prachi tells that Ranbir has married Rhea and she is not okay with it, she doesn’t want to talk to him. Lakshmi tells that sometimes the situation is against a person. She shows her maturity. She leaves them for a talk.

Malishka finds Lakshmi leaving on her own. She thinks her fate is terrible today. Shahana also asks Prachi to talk to Ranbir once. Ranbir asks Prachi to not talk to him on anyone’s saying. He wants her to follow her heart and talk to him when she wants. He asks her why did she become his old Prachi on the anniversary day and why did she change suddenly. She tells that he changed in one night and that’s the reason that she changed. He tells that their love changed, but he doesn’t know if she hates him now. They both cry. He leaves.

Prachi goes to find Lakshmi, who got upset because of her problems. She prays for Lakshmi that she gets what she wants. Rhea finds Ranbir and stops him to question his character. She rebukes him for making her cry. He asks her not to accuse him, he is already in a bad mood. She tells that she is his wife and he should play holi with just her. He tells that he isn’t her slave, he is free to do anything as he wills. He asks her not to command him. He goes away. She tells that she can do a lot in hatred, she will show him what she can do. What will Rhea do after her failed attempt of attacking Prachi? Keep reading.

Dida shows her faith on Ranbir. She tells Shahana that Prachi thinks that Ranbir had slept with Rhea, so Prachi got upset with him, but if they bring out the truth, then Ranbir and Prachi’s relation will get better. She tells Shahana that they must find the truth. Rhea tells Aaliya that Prachi and Ranbir must go away from each other and never meet again, then Ranbir will have just one way that comes towards her. Aaliya tells that her dream will come true.

Rhea lies to Ranbir that she was leaving from the room, but he forced her. She sheds tears. He tells her that he isn’t so wrong, he can’t force her. She tells that he wants to emotionally break her and put her in depression. She tells that someone would have spiked his drink so that he forces her. He apologizes to her. He tells her that he isn’t such a person, he didn’t mean anything, it wasn’t intentional, it was an accident, the person who spiked his drink is wrong. He tells that they both aren’t wrong. He makes a leave, while Rhea and Aaliya laugh. Dida finds Shahana sad. Shahana tells that Ranbir and Prachi are upset, so they are also upset, they all are connected emotionally. She tells that they will be happy if Ranbir and Prachi stay happy. She doesn’t want them to angrily break their relation.

Shahana asks Dida to tell her what she could do. Dida asks her to find the truth, why did Ranbir sleep in Rhea’s room. She tells that they shall find the truth and make their relation better. Shahana tells that she will prove Ranbir innocent, then Prachi will forgive him and they will stay happy. Aaliya asks Rhea did Ranbir believe her. Rhea tells that she instantly made a story, he asked her why did she sleep with him and gave him a husband’s right when he declared Prachi as his wife. Aaliya asks what did she answer him. Rhea tells that she has lied to calm him down, she didn’t understand anything, she cried a lot and told a story that he forced her that night.

Aaliya laughs on hearing her smart lie. Rhea tells that Ranbir was so ashamed of himself, he felt so guilty and apologized to her. Aaliya feels proud of her and calls her scary. Rhea boasts of her intelligence. She tells that Ranbir was blaming her first and now he is blaming himself. She wants everything will go well from here. Ranbir breaks down in guilt. He can’t imagine how this happened by him. He tries hard to recall what happened that night. He just remembers that he was imagining Prachi when he was with Rhea.

He doesn’t know how he has got drunk when he removed the bhaang from the counter. He doesn’t remember who fed him the bhaang. Ranbir wants Prachi to support him. He tells that he can’t become a victim of someone’s conspiracy. He wants to go to the root of the problem. He thinks to apologize to Prachi. Even Prachi thinks she has scolded Ranbir a lot. She also goes to apologize to him. They both meet, but don’t break their silence. Aaliya asks Rhea to use her mind and keep an eye on Prachi. Shahana thinks of keeping an eye on Rhea. Rhea asks Aaliya what does she mean to say. Rhea tells that they should create hatred between Ranbir and Prachi.

Aaliya tells that one drink has the power to separate two lovers. Rhea asks her if they can’t use the idea once again. Shahana overhears them. Aaliya and Rhea catch her and ask her if she is eavesdropping on Prachi’s saying. Shahana tells that she came to ask if they want any cool drinks. Rhea tells that Shahana is up to something. Aaliya asks her to focus on Ranbir and not worry for anything else. Preeti asks the cook to make coffee for Rhea. Ranbir reaches the staff to know about the bhaang drinks. The servant tells him that Aaliya was feeding the thandai to everyone, he should ask her about the bhaang. Ranbir remembers that he had taken the thandai from Aaliya’s hand. He thinks Aaliya can’t do this with him, but she can do anything for Rhea.

Reviewed Rating for Kumkum Bhagya 18th March 2022 Written Update Broken Pranbir: 4/5 This rating is solely based on the opinion of the writer. You may post your own take on the show in the comment section below.