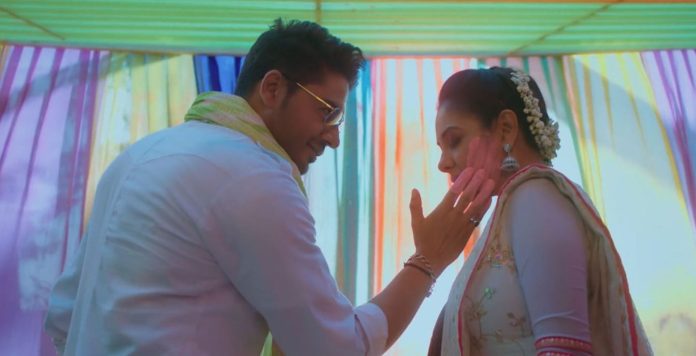 Anupama 18th March 2022 Star Plus Top 3 Upcoming Anupama gets excited to see Anuj. She runs after hearing his audio message. Vanraj locks Anupama in the room and stays ready to throw the colours at her. He doesn’t want Anuj to get the first holi rights on Anupama. Anupama fools Vanraj and leaves from the house to meet Anuj. She covers herself with a sheet to avoid the colours. Anuj and Anupama get super joyed on seeing each other. He removes the helmet and the rain coat. They both run to each other. Anupama takes him to the temple to light the diya. He mistakenly drops the sindoor at her. They have a moment of love. Anuj and Anupama head on to perform in the holi function.

Later, they get away from the crowd and spend a moment in isolation. They apply the holi colours to each other with much love and emotions. Their romantic moments are seen after Anuj’s hilarious Holi fun. Anuj and Anupama had decided to apply the colours to each other first. They keep their promise, by not letting anyone else throw colours at them. Anupama has failed Vanraj’s plan. Anuj and Anupama go to Vanraj and splash colours at him. Vanraj gets infuriated and shouts who has dared to do so. Anuj tells that its Maan, Anuj and Anupama. Vanraj isn’t able to accept Anuj and Anupama’s relationship. There will be a big drama in the holi function with Rakhi’s entry.

Raavi finally admits her feelings for Shiva. She tells Shiva that she is drunk but he is responsible for her state. She ads that she loves him a lot, if she is Shiva, then she is doing a Tapasya like Parvati with a hope of their union. She falls into his arms. She doesn’t want to marry him without his consent. She vents out her emotions. She asks Shiva to go to the court and find out who had gone to submit the papers to apply their divorce. She tells that she has no proof of her innocence, but her love is her proof. She wants him to believe her. Shiva decides to find out the truth. He calls the counsellor to know about their divorce truth. Shiva will learn Prafulla’s plans. Pandyas keep Shiva and Raavi’s Sangeet ceremony. Will Shiva accept Raavi?

Ghum Hai Kisi Ke Pyaar Mein:
Sai has fallen in love with Virat. She is very excited to confess love to him. She gets decked up as his bride. She apologizes to Virat. He vents anger on the furniture. He asks her to just sleep silently. She is trying hard to convince him. She tells that its his love that he couldn’t see her sleeping on the floor. She thanks him for the care. He asks her to sleep. Sai advises him to take good rest and strength to tolerate this problem. He doesn’t want her to make a joke of their loves. She wants him to forgive her. He threatens of leaving the room if she shows her face. She puts a curtain between them. She tells that he will not see her now because of the line of control. He asks her to stop the drama.