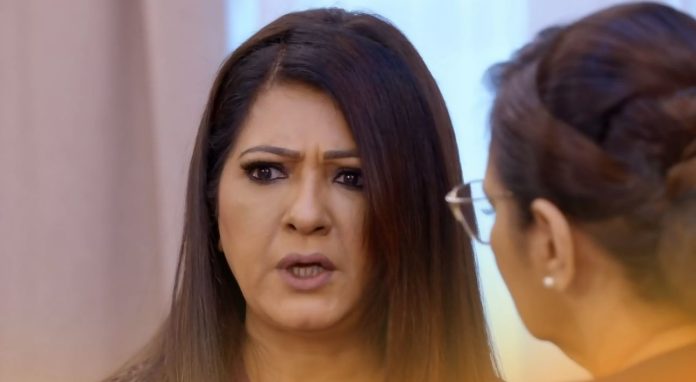 Kundali Bhagya 18th March 2022 Written Update Kareena’s act Preeta and Shrishti work out their plan in front of the family during dinner. She takes the tablet after finishing the food. Shrishti checks the tablets strip and reacts aloud, asking Preeta why did she take that tablet when she knows that she gets a deep sound after taking it. She tells that it will be a problem for Preeta if she gets a sound sleep tonight, because she has to stay awake and guard the important papers. Preeta tells that she has the property papers and can’t afford to sleep. She worries. She pretends to already get sleepiness. Kareena tells her plans to Bani. She tells that she will go to Preeta’s room once Preeta sleeps. She adds that she will steal the property papers and then snatch all the bossing rights from Preeta. Bani supports Kareena. Everyone is fed up of Preeta. Karan doesn’t support the family. He thinks of guarding the papers while Preeta is asleep.

Earlier in the show, Karan finds Preeta crying and asks is she afraid to keep the property papers in the house. The family meets for the dinner. Preeta threatens Sherlyn that she will relieve her of her duties soon by ousting her of the house. Preeta asks Kritika and Natasha to serve the food and help Rakhi in the work. Girish gets the file for Preeta. Preeta thanks him. She tells Shrishti about the secret. Karan tells that everyone knows about the property papers already. Preeta does overacting in front of them. Who will steal the papers and get caught by Preeta? Prithvi or Kareena? Keep reading.

Karan tells Preeta that everyone knows about the property papers, but they aren’t thieves to steal it. Preeta asks him who has told him about the papers. Bani and Kareena scold her and tell her that they got to know this from her itself. Kareena reminds how Preeta was shouting on the phone call about the papers. Kritika and Shrishti get involved in the arguments. They misbehave with each other and forget their manners. Karan asks Kritika to just shut up. Shrishti tells that she respects Karan and loves him, so she will sit silent. Karan asks Shrishti to stop it. Kareena tells that Shrishti has done a drama and created problems between Karan and Kritika. She asks Shrishti is she happy.

She misunderstands him and thinks if he wants to hurry in their relationship. He tells that he wants to take her home quickly because her Biji isn’t well. He clears the misunderstanding. She reveals Preeta’s plans to Sameer. She tells that Preeta has used the property papers as bait to catch Prithvi and get him arrested. She asks him not to worry for Biji. She thinks their relationship is going too slow. They share a sweet moment. Preeta thinks if the property papers really get stolen, then she will accuse Prithvi and send him to the jail.

She wants to use the last weapon by which she can win. She thinks to wait and check who is awake at midnight. Sameer slows down the car. He tells that Biji is okay, so he doesn’t need to rush now to drop Shrishti home. He plans to spend time with her. She shouts and scares him. She bursts into laughter. She asks him how did he believe her when she said the car will bang in the air. He drops her home. He apologizes for picking her eyelash, because he didn’t intend to touch her. He asks her to make a wish. She asks him to make any wish. He tells that he likes to see her normal like before. She tells that even she is glad that their friendship is back. He makes a wish for her happiness.

Natasha makes a live dance video. Sherlyn stops her. She asks her to help her in the plans than making the stupid dance videos. She limits Natasha from dancing. Natasha tells that she makes the videos because dance is her passion. Sherlyn doesn’t believe her fake story. Natasha wants to prove it that Sherlyn is mad for money. She also thinks of stealing the papers and becoming the new boss of the house. She wants to show Sherlyn her right place. Kareena gives the medicines to Bani. She tells that Rakhi is hurt, they should give her time.

Bani asks Kareena why doesn’t she take medicines. Kareena tells that she feels sleepy when she takes medicines. Bani asks the truth. She makes her swear. Kareena tells her plan of stealing the property papers from Preeta. Bani asks will she steal it. Kareena tells that she can go to any extent to remove Preeta from the owner’s position. Bani tells that even she was thinking to do the same for the sake of the family. Natasha tries to make Karan against Preeta. She knows that it won’t be easy. She wants Preeta to go against Luthras, then Karan will hate her. Natasha, Sherlyn and Kareena attempt to steal the papers. Preeta waits for Prithvi to come to her room and steal the papers.

Reviewed Rating for Kundali Bhagya 18th March 2022 Written Update Kareena’s act: 4/5 This rating is solely based on the opinion of the writer. You may post your own take on the show in the comment section below.