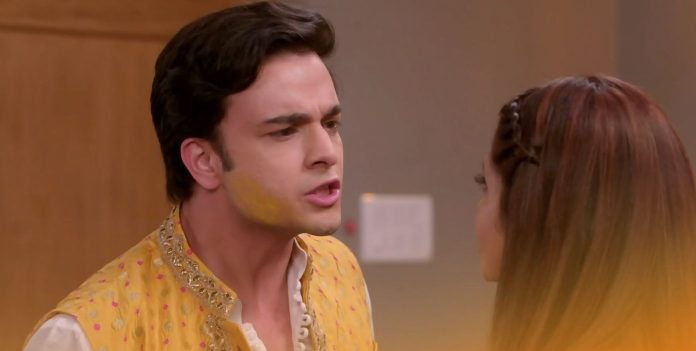 Kumkum Bhagya 17th March 2022 Written Update Ranbir rebukes Rhea Ranbir bursts out his anger on Rhea. He reminds her what he told her on the day of Vikram and Pallavi’s anniversary. He tells her that he had clearly told in front of Rhea that he loves Prachi. He reminds that he held Prachi’s hand and told that Prachi is his real wife and he loves her a lot. Rhea tells that she remembers it. He asks her if she remembers this, then why did she sleep with him, just because she wanted to have a wedding night with him. He criticizes Rhea for calling her love true and falling to this level just to win him. He tells her that from now, she can never claim that she loves him. He adds that she has stained the self-proclaimed relationship of them.

Earlier in the merger episodes, Lakshmi tells that Rishi admits it that he loves only Malishka. She can’t believe his feelings over his words. She asks Shahana what will she do against Rhea if she is permitted. Shahana tells that Prachi loves Rhea and won’t let her do anything to Rhea.

She adds that Aaliya is worse than Rhea. Balwinder tells Aaliya that he will kill her if she doesn’t apologize. Rhea and Aaliya apologize to Balwinder. He tells Aaliya that his mood is good because he met Lakshmi, he is going to take Lakshmi and that’s why he is sparing Aaliya’s life. He asks them not to put hurdle in his work. He asks who would help him in finding Lakshmi. Malishka meets them and tells that she would help them in finding Lakshmi.

Prachi asks Shahana not to get angry. Rhea and Aaliya discuss their plans. She sees the colour gloves. Preeti hides her boyfriend from Aaliya. Nick introduces himself. He asks Rhea and Aaliya to call him if they need any taxi service. Nick acts oversmart. Aaliya asks him to leave. Dida tells Shahana that she wants Prachi to tie the thread around her wrist. She tells that Lakshmi has saved Prachi today. Ranbir overhears Dida and Shahana’s conversation. He asks Dida what happened to Prachi. Dida tells that someone had tried to apply chemical colours to Prachi to damage her face.

Ranbir is shocked. He takes the protective thread for Prachi. Dida tells Shahana that she told Ranbir everything that happened with Prachi. Ranbir goes to see Prachi. He asks her why didn’t she tell him about the attack. She asks him why is he important to tell him everything, he isn’t any police or doctor to help her. He asks her what problem does she have. He wants to become trustworthy. She tells that it can never happen. He asks her why can’t be trust him, when she could love him. She reminds that he cheated her. She doesn’t want to trust him and break her heart. He tells that he falls for her every day, and she hurts him equally. She asks him not to come close and get hurt. He wants to know if she is okay. She asks him to go away.

Rhea asks Aaliya what should she do now. She can’t tolerate Prachi more. She curses her fate that Prachi is her twin, Prachi was born first and got mum’s love. She tells that Abhi raised her with love, but couldn’t take Pragya’s place. She feels that nobody can take a mum’s place. She misses Meera. She shares the joy when she met Pragya. She hates Prachi who has snatched Abhi and Pragya from her. She tells Aaliya that Ranbir is behaving so normal like nothing happened between them. She asks Aaliya how can she control Ranbir. Ranbir arrives there in anger. Rhea asks why is he so angry. He tells that he just has to talk to Rhea. He asks Aaliya to excuse them for two minutes. He shuts the door.

He tells Rhea that he told her clearly that he loves Prachi, that Prachi is his wife. He questions, why did she sleep with him when she was in her senses, while he was inebriated. He tells that she wasn’t drunk, she should have left him alone, but she took an advantage of his drunken condition. He accuses her for planning the wedding night. Rhea tells him that he wasn’t unconscious, she told him to leave the room and also tried to go away. She sheds tears and plays a victim card. She cleverly lies to him that he didn’t let her leave from the room and forced her. Ranbir is shocked by her unexpected confession. Will Ranbir believe her fake story? Stay tuned.

Reviewed Rating for Kumkum Bhagya 17th March 2022 Written Update Ranbir rebukes Rhea: 4/5 This rating is solely based on the opinion of the writer. You may post your own take on the show in the comment section below.