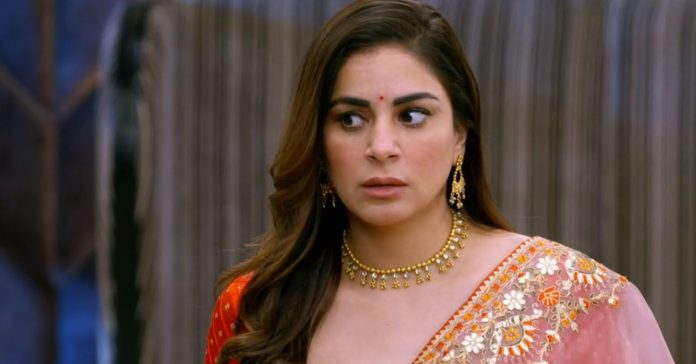 Kundali Bhagya 21st March 2022 Written Update Plan finale Sherlyn tells Prithvi that the papers aren’t important for him, but the papers are really important for her. She asks him to please steal the papers for her sake. Preeta pretends to sleep. She waits for Prithvi to come to the room. Kareena and Bani try to steal the papers. They sneak inside Preeta’s room at night. They see Preeta sleeping. They proceed towards the cupboard locker to get the papers. They find someone coming next, and hide inside the room. Who will be the one stealing the papers? Who will fall into Preeta’s trap? Keep reading.

Natasha wants to prove it that Sherlyn is mad for money. She also thinks of stealing the papers and becoming the new boss of the house. She wants to show Sherlyn her right place. Kareena gives the medicines to Bani. She tells that Rakhi is hurt, they should give her time. Bani asks Kareena why didn’t she take medicines. Kareena tells that she feels sleepy when she takes medicines. Bani asks the truth. She makes her swear. Kareena tells her plan of stealing the property papers from Preeta.

Bani asks will she steal it. Kareena tells that she can go to any extent to remove Preeta from the owner’s position. Bani tells that even she was thinking to do the same for the sake of the family. Natasha tries to make Karan against Preeta. She knows that it won’t be easy. She wants Preeta to go against Luthras, then Karan will hate her. Natasha, Sherlyn and Kareena attempt to steal the papers. Preeta waits for Prithvi to come to her room and steal the papers.

He makes her leave the room. Karan asks Sameer to keep his manners. Natasha angrily leaves. Sameer tells Karan that he is just of Preeta. Karan knows it. He asks Sameer to go and sleep. Preeta goes to her room. She informs Shrishti that the entire family members have slept, but just Prithvi is awake. Shrishti tells that Prithvi would be so wanting to steal the papers. She asks Preeta to switch off the room lights and then see Prithvi coming to steal the papers. Preeta tells that she has to use the property papers as a weapon to tackle Prithvi. Shrishti asks her to relax, and be alert that she is putting the property papers at stake. She explains the consequences to Preeta.

She tells that the family doesn’t know about her good intentions. She warns Preeta. Preeta asks her not to scare her. Shrishti wishes her all the best. Preeta thanks her. She lies down on the bed and pretends to sleep. Shrishti prays that Preeta doesn’t lose out. Preeta wonders why didn’t Prithvi come till now. She doesn’t want to keep the papers openly. She hears someone coming and gets back to her bed. Sherlyn enters Preeta’s room to get the papers. Even Bani and Kareena come there to steal the papers.

Natasha also arrives with the same intention. Preeta wakes up by Natasha’s scream. She questions them about their presence in the room. Bani lies to Preeta about Karan’s sleepwalking. Kareena tells that she came following Bani. Sherlyn tells that she came to see what work Bani and Kareena have with Preeta. Preeta finds their excuse really funny. Natasha tells that everyone was coming to the room. Preeta asks them to stop giving lame excuses. She tells that she has to sleep. She asks them to leave from her room. Nobody gets the papers. They leave. Bani takes Karan with her.

Reviewed Rating for Kundali Bhagya 21st March 2022 Written Update Plan finale: 4/5 This rating is solely based on the opinion of the writer. You may post your own take on the show in the comment section below.