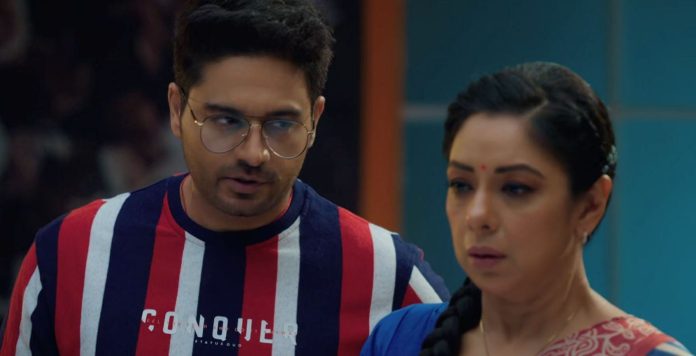 Anupama 22nd March 2022 Written Update Major dilemma Pakhi tells her friends that her Holi was amazing. Her friend says it doesn’t look like seeing her face. Pakhi tells her friend that she just got tired of playing holi. Another friend of Pakhi asks her why she made a sudden plan for a group video call. Pakhi’s friend announces that their friend Tiara’s mother is getting married for the second time. Pakhi’s other friend laughs and says that it means Tiara will have two fathers now. Pakhi asks, so what, people get married even after the age of 60 in the US.

Pakhi’s friend tells Pakhi that mothers do not get married in India. She tells Pakhi that everyone will tease Tiara in school now. Anupama overhears it. Baa calls Pakhi from downstairs. She disconnects the video call. Before Anupama could say anything to Pakhi, the latter starts pouring her opinion on Anupama’s second marriage. Pakhi tells Anupama that she already got teased and embarrassed when Vanraj got married for the second time. She also tells Anupama that her classmates made her stand in a box of questions. Pakhi further tells Anupama that her friends still question her that why Vanraj left Anupama, how is Kavya (new mother) and when are your little siblings coming. Pakhi says to Anupama that she can’t face the same mental torture and embarrassment again.

Anupama tells Pakhi that they can’t shut people’s mouths as it’s their work to trouble people. Pakhi stops Anupama and tells her that she is not stronger and great like her. She asks Anupama to not expect that she can fight the world like her. Pakhi tells Anupama that Vanraj’s second marriage was acceptable as father’s can do second marriages, but not mothers. She leaves asking Anupama to not even think about getting married for the second time. Anupama feels bad and tears arise in her eyes. Vanraj comes there and says Pakhi is right, mother’s can’t marry for the second time.

At the academy Anupama recalls Rakhi, Pakhi, Baa, Vanraj, Dolly, Samar and Bapuji’s words. Anuj also reaches the academy and sees Anupama lost in her thoughts. He brings her back to reality and asks her what happened. Anuj apologizes to Anupama for blurting out of limit in a drunken state. He asks Anupama if someone said anything to her. Anupama remains silent and says let’s prepare for the dance competition. She starts dancing on “Mere Dholna” and Anuj watches her. Anupama silently screams out her pain and agony through her dance. Anuj saves Anupama from falling. He tells Anupama that he gave her name in the college dance competition, but didn’t know that her name will take 26 years to reach the stage.

At Shah house, Dolly, Samar and Bapuji are seen in a tense discussion. Dolly says she found Anupama silent. She says she is worried, thinking what if Anupama comes in Baa’s words/influence. Samar says Anupama always backs away from Anuj and their relationship because of some or the other reason. He also says that Kinjal is blaming herself for Anuj and Anupama’s pain and sufferings. Bapuji says only Anupama’s house changed because of Kinjal, not Anupama’s relationship with Anuj. Samar says the actual reason for all these problems is Vanraj and Baa. Baa is seen telling Vanraj that these days children don’t believe in old values and supports old age people’s marriage.

She says family lives in society, not the internet. Baa says people have to walk with and according to society as society doesn’t walk with or according to people. She also says everything has an age. Baa further says that she won’t let Anupama get married for the second time. Kavya comes and tells Baa that her emotional blackmail is good. Baa stays determined that she won’t let Anuj and Anupama get married. Samar tells Bapuji that he is feeling very scared. Bapuji that even he is scared. He explains that society has tied men with only responsibility shackles but has tied women with hundreds of shackles named; responsibility, relations, age, family, honor, infamy, values and many more.

Bapuji says how much their Anupama will fight and how many shackles will she have to break. Dolly says men reach their happiness by running 100 meters races but women have to run a long obstacle race to reach her happiness. She also says that women find new obstacles at every step of her life. Dolly further says she is privileged but finds other women fighting for their basic rights like; getting educated, going for higher studies, for getting jobs, marrying as per their own wish and bearing a child at the time she wishes. She says that a woman’s fight never ends. Dolly asks Bapuji when will Anupama’s fight stop.

Anupama thinks why Anuj is so good that he understands her every problem and even her silence. She asks Anuj to let her go as she has to prepare for tomorrow. Anuj leaves Anupama’s hand, indirectly telling her that he can’t say no to her if she wants to go away from him. He starts leaving the academy. Before leaving Anupama Anuj tells Anupama that he left her hand, not her support. He also tells Anupama that he will go away without requesting her, if she leaves his support this time. Anupama turns to Anuj shockingly. Through a painful poetry, Anuj tells that he will become her past and won’t return. He also tells Anupama that he is not blackmailing her emotionally but just telling her the truth.

Anuj further tells Anupama that right now they are together and she has rights on all his life decisions but she will lose all her rights if they get separated and all rights and decisions will be his. Anupama gets shocked hearing Anuj’s decision and words. Anuj leaves the academy. Anupama breaks down into tears recalling Anuj’s words and decision. Anuj feels tense realizing whatever he said to Anupama. He says a painful and fearful poetry. Anupama thinks why her family is not understanding her love, when she always understood her family. Anuj says Anupama will lose her love if she chooses her family. He also says that he will die if Anupama leaves him. Anuj says Anupama’s decision should be hers only.

He prays to God to make his and Anupama’s love win once. Anuj says his breath, world and life will stop if his love gets defeated. Anupama cries profusely for not being able to tell Anuj what happened at Shah house. She says she can’t give another pain to Anuj like always. Anupama asks God why this (wrong) always happens. Dolly, Samar and Bapuji worry for Anupama. Anupama returns sad. Noticing this Bapuji wonders if something happened between Anupama and Anuj. Anuj receives Bapuji’s call. Bapuji asks Anuj if something happened between him and Anupama. Anuj lies to Bapuji telling him that everything went all right.

Bapuji tells Anuj that he doesn’t look good while lying. He asks Anuj what happened. Anuj tells Bapuji that Anupama is not talking to him. Anuj says he doesn’t know what words of Baa made her so silent. He tells Bapuji that he is feeling scared if Anupama will get separated from him. Bapuji asks Anuj to not get scared as God will make everything alright soon. After talking to Anuj; Bapuji, Dolly and Samar get worried thinking if Anupama is thinking about taking the wrong decision by getting influenced by Baa’s words.

In the next episode, Anuj will be seen happy on completing his meeting before Anupama’s performance. Samar will ask Anuj on call to come as soon as Anupama’s performance is going to start in one hour. Anupama will think that she took the final decision and will end this story today. Anuj will be seen driving fast to reach and will meet with an accident. At the same time, Anupama’s aalta bottle will fall down with her. Seeing Aalta fallen, worried Anupama will scream Anuj’s name. Smoke will be seen coming out of Anuj’s car.

Reviewed Rating for Anupama 22nd March 2022 Written Update Major dilemma: 3/5 This rating is solely based on the opinion of the writer. You may post your own take on the show in the comment section below.