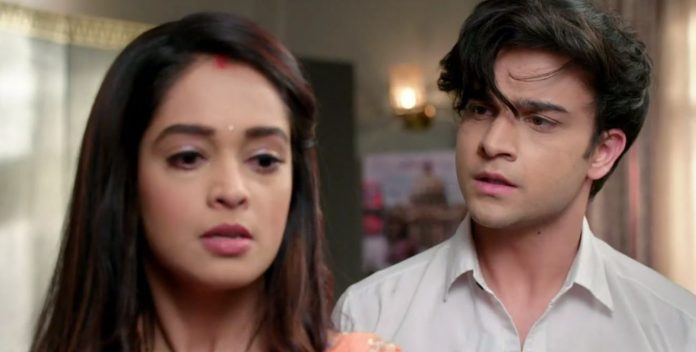 He feels he did a big mistake to get her to the Kohli house for the sake of his parents. She tells that he separated her from him, his parents didn’t do anything. She regrets that she had to prove it to the world that she is his wife. She accuses him. They both shed tears. She wants to wipe his tears. He asks her not to do so if she has anger. She asks if he is right and she is wrong. She wants to keep her anger. Prachi leaves from there.

Shahana cries on seeing Ranbir’s sorrow. She tells that she is glad that Ranbir has decided to prove his innocence. She asks him to promise that he will never get upset and forgive her. He asks her what did she see. She tells that he is the world’s best brother-in-law. She hugs him. He asks her to calm Prachi’s anger. She tells that Prachi thinks he has moved on with Rhea, maybe he is innocent. She believes him. He thanks her. He tells that he wants to prove to Prachi that he just loves her. She offers him help. Shahana thinks to check the dustbin for any tablet strip. She checks the dustbin and gets the pills strip. She clicks a picture to save the proof. She plans to get the medicine checked at the store to get the details about it. Rhea and Aaliya find the dustbin. They get the pills strip. Aaliya asks her to destroy it. Rhea destroys it.

Pallavi asks Rhea to pack her bags, she will stay with Ranbir in his room from now. Rhea gets happy. Dida is much disappointed. Ranbir gets helpless and runs to seek Prachi’s help. He asks Prachi to help him and save him from Rhea. He tells that Rhea is shifting to his room. He asks her to stop Rhea. She asks him to do the task himself. He tells that he can’t handle Pallavi, Aaliya and Rhea at the same time. He asks Prachi to come with him and help her. He innocently asks Prachi for help. He tells that he doesn’t want to share his room with Rhea, who will take this development as a positive sign towards their relationship. He doesn’t want to give false hopes to Rhea. Prachi gets angry seeing his kiddish behavior. Keep reading.

Rhea tells Aaliya that Ranbir didn’t check the dust bin else he would have got the strip. They yell at Preeti and send the dust bin. Rhea thinks she has destroyed the evidence. Shahana tells Prachi that she got a special juice. She adds some pill in it. She tells that she will drink the juice now. She adds that she found the pill really interesting so she went to the medical store and got it. She gets intoxicated after taking the pill. Prachi finds her dancing and laughing. She asks Shahana is she okay. Shahana tells that she can do Naagin dance also. Prachi asks her not to move.

She tells that a person can’t tolerate infidelity, Ranbir had questioned Prachi before and now he is willing to go back to Prachi. She confesses her plans. She asks Aaliya to notice the pattern. Aaliya isn’t able to understand what she means to say. Rhea tells that she isn’t able to separate Ranbir and Prachi, who are a strong couple, they trust each other always. She is upset that they always get together even after their love is tested so hard. She tells that Ranbir is doubting her. She can’t take it anymore. She tells that she is really scared. Pallavi comes and asks Rhea what’s the matter that she is so scared. Aaliya tells Pallavi that Rhea is feeling scared and insecure about her future.

She tells that Ranbir is nowhere in Rhea and Ranbir’s marriage. Dida eavesdrops to know their plans. Aaliya tells that Rhea is still living in the guest room. She asks Pallavi to get respect for Rhea. She suggests that Ranbir and Rhea should stay together in the same room like a married couple. She tells Pallavi that Rhea has her own wishes. Pallavi agrees with her. She tells that Rhea should stay in Ranbir’s room. She asks Rhea to pack her bags and shift to Ranbir’s room. Dida gets worried. She goes to tell Prachi about it. Rhea tells that she can’t believe the surprising change. She thanks Pallavi. Pallavi tells that its Rhea’s right.

Ranbir meets Prachi. He remembers Dida’s words. He asks Prachi if she can spare a minute. He tells that Dida has given the protection thread for her. He asks her to make Shahana tie it. He thinks she won’t permit him. She asks him will Rhea feel bad if he ties it to her. Ranbir ties the thread around her wrist. They get into a moment. He tells that he will do anything for her. She asks him if he wants anything from the kitchen. He tells that whatever he says, she will think it’s a lie. He wants to prove his truth first and then talk to her. He tells that he is ready to tolerate a bit more. He goes away and looks at her with love. Prachi recalls his words. She loses her focus. Ranbir hides from her.

Dida finds Shahana intoxicated. She asks her what happened. Shahana tells that she has learnt the truth about Rhea. She tells that Rhea is a bad girl. Dida wants to know what did she mean to say. Rhea asks Aaliya what did she do. Aaliya tells that Ranbir and Prachi’s relationship will break now when Rhea shifts to his room. She is sure that Prachi didn’t forgive Ranbir, her faith will end and then she will get distant from him when she sees him sharing the room with Rhea. She asks Rhea to imagine what will Prachi think. Rhea tells that Ranbir is suspecting her. Aaliya asks her to stay alert.

Pallavi arranges Rhea’s clothes in the cupboard. Rhea tells that Ranbir will be angry on her that they have to share the cupboard. Pallavi asks her to share Ranbir’s life, she is his wife and holds all the right. Ranbir comes there and asks them the reason for their important meeting. Pallavi tells him that Rhea is shifting to his room. He is shocked to know this. He asks her why is Rhea’s clothes arranged in his cupboard. Aaliya tells that Rhea will be living in his room. Rhea tells that Aaliya and Pallavi want them to share the room and also their life. He asks Rhea how is it possible. He excuses himself. Rhea tells that Ranbir is nervous. Pallavi tells Rhea that she has finally won.

Aaliya asks Rhea to take Pallavi’s blessings. Pallavi blesses Rhea. She thanks Aaliya for the wonderful suggestion. She wants Ranbir and Rhea to stay happy. Aaliya hugs Rhea. Rhea dances in joy. Ranbir rushes to Prachi and tells her that Rhea is shifting to his room. He asks her to help him and stop Rhea from shifting. She asks him to sort his own problem. He asks her to please save him. He tells that they will listen to her when she tells them that she is going to shift to his room. She refuses to say anything such. He asks her not to refuse the help. She asks by what right will she make Rhea out of his room. Ranbir thinks Prachi doesn’t love him, she always hurts him. he holds her heart and praises Prachi. He encourages himself. He thinks to talk to Rhea and stop her from shifting to his room.

Reviewed Rating for Kumkum Bhagya 23rd March 2022 Written Update Twist for Ranbir: 4/5 This rating is solely based on the opinion of the writer. You may post your own take on the show in the comment section below.