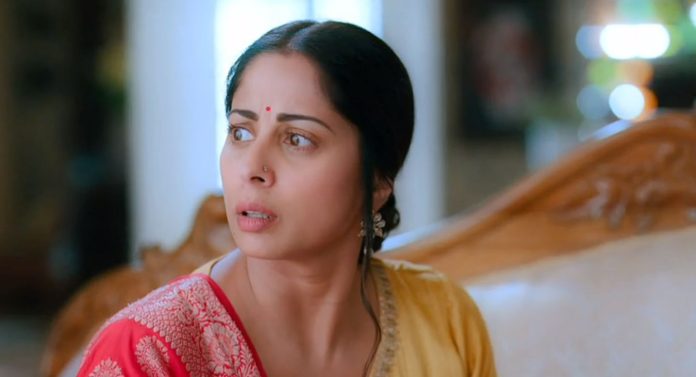 Swaran Ghar 23rd March 2022 Sasural Simar Ka Upcoming Giriraj complains to Chitra about Gajender who always dominated him in the office. Chitra tells that she always got sidelined and lost the respect because of Mata ji. She feels upset that their only hope Vivaan also failed in securing their position in the house. She tells that Vivaan also wasted his life after Aarav. She adds that Aarav is the problem, just like Gajender. She tells him that they have to stop Aarav and Gajender from coming in their way. She wants to secure Vivaan’s future. Aarav hears them talking about him and interrupts them. They get a shocker on seeing Aarav at the door. Aarav’s entry makes them step back in fear. They act like cowards seeing Aarav.

Aarav tells that he just came to talk to them. They realize that Aarav didn’t hear anything. Aarav requests them to forget everything that happened. Chitra tells that its too difficult for her to forget how the family suspected Giriraj. Aarav tells them that everybody knows that Gagan has shot the bullet. He relieves them. Chitra wants to do something that Aarav and Badimaa/Mata ji throw out Simar from the house. Badimaa performs the puja around the Holika, while Aarav catches Devesh to end his evil. Simran inspires Reema to end Devesh’s evil. Reema slaps him and teaches him a lesson.

Yug, Nakul and Vikram question Swaran about Ajit. Swaran tells that Ajit is from her village. She doesn’t say that Ajit is her childhood friend. They ask her how can Kanwal make Ajit the guardian of his property if the latter is from her village. Swaran gets questioned by her sons. Vikram thanks her for the deceive and breaks the savings pots she had kept safe since their childhood. She cries seeing Vikram’s ill behavior. Nakul and Yug also get against Swaran. They try to prove her mentally unstable to get the property, but their plan fails because of Kanwal making Ajit the guardian. Neelima asks them to stop hurting Swaran. Vikram insults Neelima. He tells that Kanwal didn’t leave any share for them. He tells Nakul and Yug that the savings Swaran made for them is the only share they have. He asks them to collect the change and be happy.

Vikram vents out his frustration. Swaran is shocked to know that her sons had called Kanwal a thief before. She learns from Vikas that Vikram tried to prove her insane just for the sake of property. She tells her sons that she can tolerate if they call her mad, but she will not tolerate if they call Kanwal a thief. She angrily throws out her sons from the house. she asks them to go back from where they had come, leaving her alone. Her sons don’t want to go without taking their shares. How will Ajit help Swaran? Keep reading.

Reviewed Rating for Swaran Ghar 23rd March 2022 Sasural Simar Ka Upcoming: 3/5 This rating is solely based on the opinion of the writer. You may post your own take on the show in the comment section below.